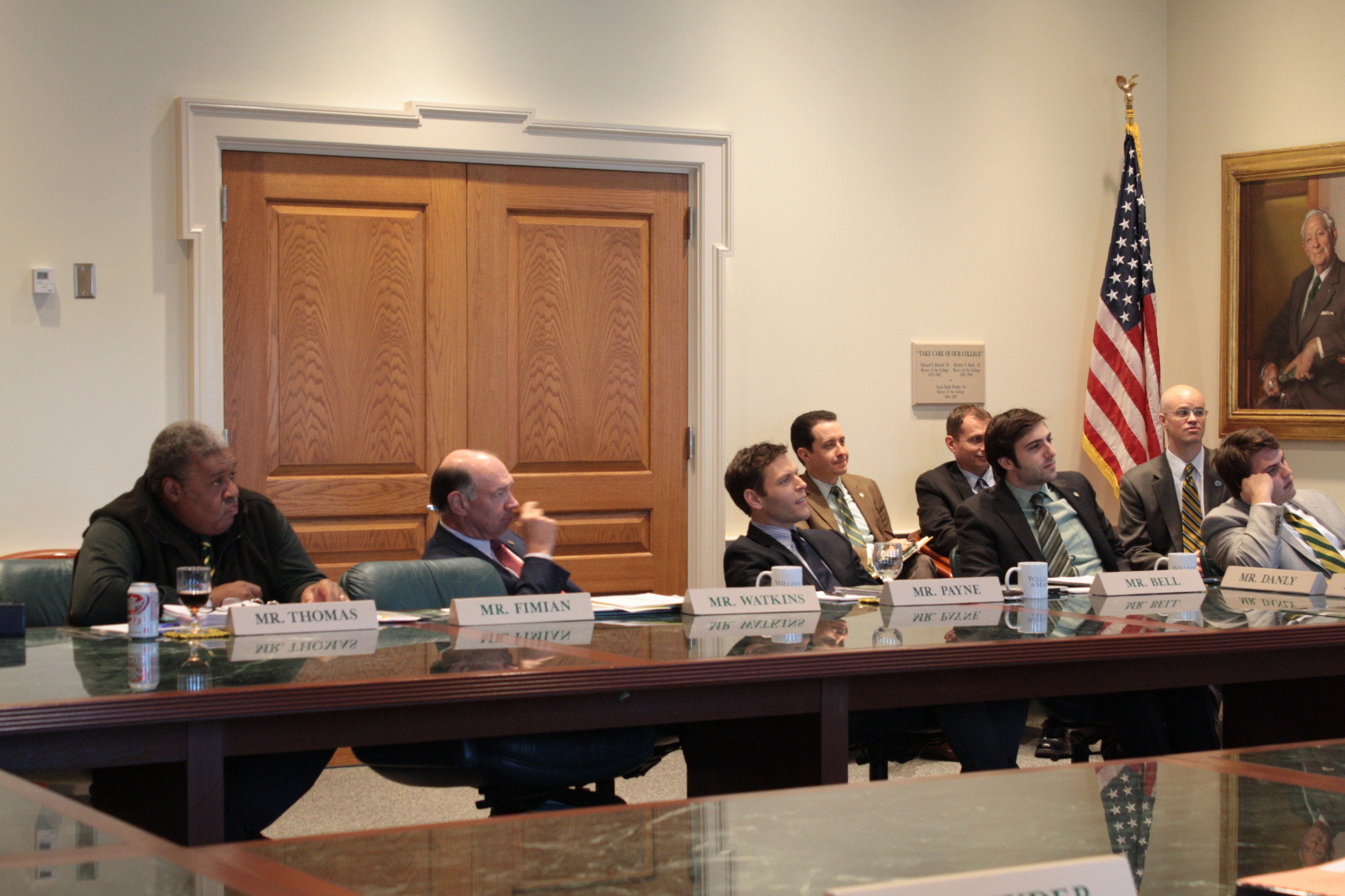 The Board of Visitors’ Committee on Academic Affairs convened Thursday at the College of William and Mary, discussing ongoing initiatives, admissions numbers, the Mason School of Business’ new online MBA program, and issues relating to diversity on campus.

In his presentation, Provost Michael Halleran mentioned that this is the 11th straight year that the College has seen an increase in the number of overall applications, with 14,950 for the Class of 2019. Compared to last year’s numbers, applications increased 9 percent among first-generation students and 6 percent among underrepresented minorities.

“Now the hard lifting begins,” Halleran said. “[Interim Associate Provost for Enrollment and Dean of Admission] Tim Wolfe [’95 M.Ed. ’01] and his staff have already brought in a great group through the early decision program. They now get to read another 10,000 applications, give or take. We hear that now, ‘It’s all an electronic process, it’s so easy, it’s the common app,’ but no, it’s a lot of work. We have a holistic review process.”

Wolfe said it is difficult to pinpoint any specific factors that contributed to the slight drop.

“Something to keep in mind is that last year, we had a banner year for early decision, so part of that is getting the sense of whether last year was a bit of an aberration,” Wolfe said. “That is certainly something we’re keeping an eye on, there’s no doubt about it. … All of us in admissions are reluctant or hesitant to ever point at one particular factor, but it’s definitely something we’ll be keeping a very close eye on.”

In addition to admissions, committee members also spoke about online initiatives. The business school’s new online MBA program began being publicized in January. Its initial class of 25 students will begin in August 2015.

Since he last spoke to the committee, Chason reported that the Faculty Assembly passed a resolution Dec. 9 regarding racial climate at the College, in light of incidents following the die-in held at Earl Gregg Swem Library last semester.

Committee member Kendrick Ashton ’98 asked about how the message was disseminated among faculty members and students.

“In light of recent events, I think it would be enormously valuable if students were made aware of the faculty’s view on those matters and others,” Ashton said.

Chason responded that he thinks students are aware of the message. Faculty representative and English professor Suzanne Raitt said the assembly communicated with several faculty members — including faculty members of color — following the resolution’s creation, and those faculty members discussed it with their students. Student Assembly President Colin Danly ’15 also sent the resolution out to the student body in a campus-wide email.

Chason also mentioned that next year, a non-tenure eligible faculty member will join the Faculty Assembly.