Many believe that diversity needs to be a topic of continuous conversation to maintain its prevalence on campuses like the College of William and Mary. SEED Dialogues are ongoing dialogues designed to address issues of social unity and equality.

The Student Engagement and Empowerment through Dialogues project started on campus in the fall. The project is as an endeavor led by the Center for Student Diversity to promote conversations about diversity on campus.

“We are offering them as a pilot project this year, and expect to continue and build the program in coming years,” Associate Director for Diversity Education and head of the dialogues Margie Cook said in an email.

The dialogues stemmed from the Diversity Peer Educators program, which runs diversity sessions for freshmen during orientation week. The Center for Student Diversity wanted to find a way to extend those conversations past students’ first week of school.

The opportunity to do just that arose this summer when Cook and five students attended the PULSE Institute at Bucknell University, a program offered by the Sustained Dialogue Campus Network to help college campuses promote dialogue and exchange among students. The PULSE Institute, which stands for “Perspective. Understanding. Leadership. Sustained. Exchange,” teaches campus groups the skills to maintain ongoing conversation on campus regarding diversity issues.

“We’d been thinking about doing something like this for a while and were finally able to make it happen, especially after learning more at the PULSE Institute,” Student Assembly Secretary for Diversity Initiatives Hannah Kohn ’15 said in an email.

Kohn was a facilitator of last year’s dialogue about religion. She is helping with long-term planning for the program this semester. There were two dialogues in the fall: one on race and one on religion. Two ongoing dialogues are scheduled for this spring: one on gender and one on race.

Two student facilitators run each dialogue and every dialogue group consists of between eight and 16 students, who apply to participate.

Sivan Yair ’16 became involved with the dialogues after being a Diversity Peer Educator. She participated in last fall’s dialogue on religion.

“I really enjoyed it, and the way it brought people together,” Yair said. “So I got involved to be a gender facilitator this year.”

Every dialogue runs for about an hour and a half and consists of seven sessions over the course of seven weeks. Yair said she usually starts her dialogue with an open discussion about the participants’ personal experiences.

“The power of a dialogue is the focus on personal experience — the opportunity to listen to another student talk about how their life has been shaped and impacted by some aspect of their identity, and to share the same about yourself,” Cook said.

Cook said that during the dialogues, the facilitators try to create an atmosphere that differs from that of a lecture. Yair said that her job as a facilitator is more about initiating open exchanges among the students than teaching them.

“I hope that students can trust one another enough to open up and allow themselves to be mutually vulnerable, a phrase that one of my friends used to describe how we can get closer to true understanding,” Kohn said. “We must be able to be okay with feeling uncomfortable — that is what builds awareness.”

The dialogues are specifically designed to represent a diverse group of students. The application to participate asks about both the student’s leadership qualities and their background.

“What I really love about it is that it brings people together who wouldn’t normally come together to talk about these Dialogues,” Yair said.

Kohn said that she also hopes the dialogues will encourage students who would not normally talk about these issues to open up.

While the dialogues begin with open discussion, the facilitators also plan activities to encourage person-to-person exchanges that will hopefully increase awareness about each other’s perspectives.

Kohn and Yair both stressed their hope that the dialogues will foster better listening on campus.

“That is how we can understand each other better,” Kohn said. “And create a true community for everyone here at W&M and when we go out into the world. 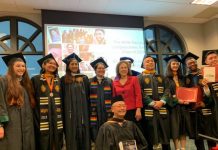