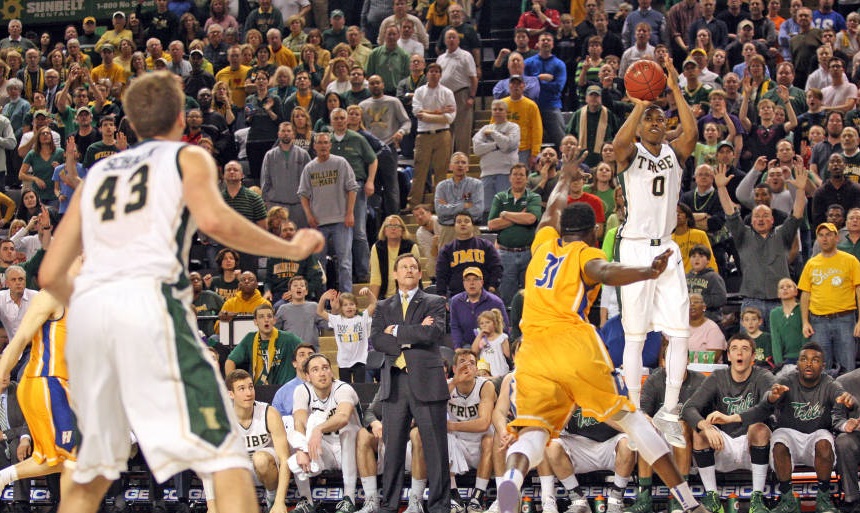 The scene was so familiar for No. 1-seeded William and Mary. Trailing No. 5 Hofstra 91-89 with eight seconds remaining under the bright lights of Baltimore, Md.’s Royal Farms Arena, senior guard Marcus Thornton raced down court hoping to make a game-winning basket, just as he had in 2014’s Colonial Athletic Association final against Delaware. Memories of last year’s missed jumper that sealed the Tribe’s tournament loss hung in the air like a ghost.

But this time, Thornton didn’t miss. He didn’t even shoot. Thornton faked the three-point shot everybody in the arena thought was coming, then fired a pass to sophomore guard Daniel Dixon, standing just a few feet away in the left corner. Dixon nailed the wide open three with 0.5 seconds remaining, giving the Tribe a 92-91 win over Hofstra and a berth in Monday’s CAA Final.

Dixon’s three was just the last basket in an unforgettable semifinal showdown. The Tribe (20-11, 14-6 CAA) forced overtime despite trailing 73-68 with just 40 seconds left in regulation, then forced a second overtime when Thornton’s clutch three-pointer tied it at 83-83 in the first extra period. All told, the Tribe defeated Hofstra (20-13, 11-9 CAA) in a game that featured 12 lead changes and a lot of drama.

The game was a showcase for Thornton, who scored a CAA Tournament record 37 points and added six rebounds, and sophomore forward Omar Prewitt, who tallied 33 points and hit nine of 12 shots. The pair scored 70 of the College’s 92 points.

Junior guard Terry Tarpey pitched in with 12 points and a game-high 10 rebounds. Tarpey played 41 minutes despite suffering a first half ankle injury which forced him to limp off the court to seek treatment. Head coach Tony Shaver was impressed with his team’s fortitude in fending off the Pride in a marathon game.

“What a great college basketball game,” Shaver said. “We’ve got a tough bunch of kids in the locker room. We talked about coming into this tournament and not blinking, and we didn’t blink tonight. We showed incredible toughness.”

“What a great college basketball game,” Shaver said. “We’ve got a tough bunch of kids in the locker room. We talked about coming into this tournament and not blinking, and we didn’t blink tonight.”

The game was contested right from the tip-off. Though the College took an early 21-11 lead, the advantage shrank to 35-32 by halftime. The teams traded leads throughout the second half, and the score was tied at 57 with seven minutes, 22 seconds left in regulation.

Then, Hofstra began to pull away, grabbing a 68-59 advantage with an 11-2 scoring run with five minutes to play, hanging on to the lead until it led 73-68 with 40 seconds to go. But when all seemed lost, Thornton completed a three point play with a layup and free throw, then drew a foul to go to the line with the Tribe trailing 73-71 with 23 seconds remaining. Thornton calmly drained both free throws, Hofstra’s ensuing shot sailed over the basket and the game entered overtime tied at 73.

The College appeared ready to seal a win in the first overtime period, jumping to a 78-73 lead with five straight points. But Hofstra rallied, finally snatching an 83-80 lead on Juan’ya Green’s three-pointer. Thornton quickly responded with a triple of his own, and Hofstra missed two game winning free throws to send the game to a second overtime tied at 83.

In the second overtime, the Tribe led 89-87 with 44 seconds remaining. Green missed the game tying jumper, but the Pride’s Malik Nichols corralled the rebound and swung it back to Green, who buried an open three to give the Pride a 90-89 lead.

When Thornton missed a go-ahead jumper with 12 seconds to go on the ensuing play, Hofstra seemed ready to seal the game. However, the Pride’s Moussa Kone missed one of two free throws, giving the Tribe the ball with eight seconds and a 91-89 deficit.

Thornton grabbed the inbounds pass, raced up court and appeared ready to pull up for a go-ahead three point try. But at the last moment, Thornton whipped a pass to Dixon, who crushed a three pointer and whipped the Tribe fans into a frenzy. Hofstra failed to get another shot off, and the College advanced with a 92-91 victory. The game winner was only Dixon’s second basket of the game, but it made all the difference.

“I think it was a great play by Marcus, having confidence in me is a big thing for him,” Dixon said. “He likes to take those last second shots, and usually he’s making them all the time … so it’s big for him to want to give it up at the end. So I just trusted it, and that was it.”

By passing up the shot, Thornton put the fate of his final season in his sophomore teammate’s hands. By knocking it down, Dixon gave himself a career-defining moment and put the College one step closer to its first-ever CAA Championship.

The Tribe will have little time to rest after the 50-minute contest. The College is set to take on No. 3 seeded Northeastern Monday at 7 p.m. at Royal Farms Arena in Baltimore, Md.