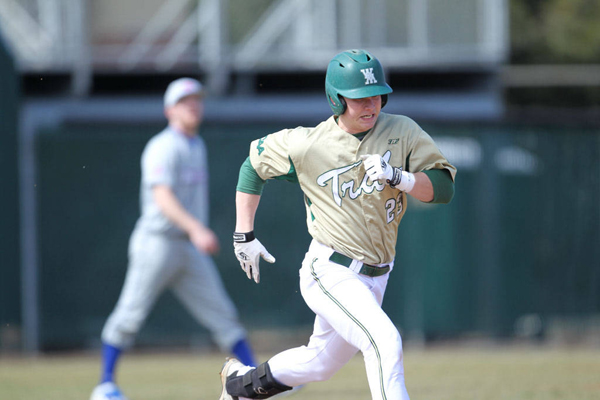 William and Mary continued to struggle over the weekend, stretching its losing streak to four consecutive games as it dropped three straight to host Kennesaw State at Stillman Stadium in Kennesaw, Ga.

In the series opener Friday, the Tribe (10-9, 2-1 CAA) quickly fell behind in the bottom of the third inning. The Owls’ (12-10, 0-0 Atlantic Sun) Corey Greeson slammed a two-out double off junior starting left-handed pitcher Jason Inghram. After a hit by pitch, Greeson came home on a single by teammate Chris Erwin. Kennesaw State added a run in the fifth inning, as the Owls’ Kal Simmons scored on a throwing error by Tribe junior catcher Ryan Hissey.

The College rallied in the top of the seventh. Senior third baseman Willie Shaw led off the inning with a walk. After senior left fielder Devin White struck out, sophomore designated hitter Ryder Miconi smacked his second home run of the year, plating two runs and tying the game at 2-2. However the Owls took the lead for good in the bottom of the inning, as an Erwin sacrifice fly scored teammate Grant Williams. Kennesaw State won 3-2.

Inghram took his third loss of the season, pitching seven innings while striking out five, allowing three runs (two earned) on six hits and a walk.

Both offenses came alive in the second game of the series Saturday afternoon. The Tribe opened the scoring in the top of the second. With one out, freshman left fielder Ryan Hall singled, advanced to third on a double by sophomore shortstop Tim Hoehn and scored on freshman right fielder Zach Newell’s fielder’s choice.

The Owls responded with two runs in the bottom of the inning thanks to a two-RBI single off Greeson’s bat. Both teams continued to score throughout the game, with the Tribe plating at least a run in every inning from the fourth on, while the Owls scored four in the fourth and five in the seventh.

Down 11-10 entering the ninth inning, the College rallied to send the game to extra innings. Freshman second baseman Cullen Large roped a double to lead off the inning. After two quick outs, junior first baseman Charley Gould came through with a clutch RBI single to knot the game at 11 apiece.

The Tribe scored a run to take the lead in the top of the tenth on a double by Hoehn. However, the Owls added two more tallies to win the game in walk off fashion, with a run scoring on an error by Hoehn and an RBI single by Kennesaw State’s Griffin Helms sealing the Tribe defeat by a final score of 13-12.

With inclement weather in the forecast for Sunday, the series finale was pushed back to Saturday evening. After plating 12 runs earlier in the day, the Tribe offense could only muster one run on three hits in the nightcap.

Freshman pitcher Robert White made his first collegiate start, and the Owls greeted him with six runs on seven hits in the bottom of the first. The Tribe responded with their only run in the top of the second, as Newell’s fielder’s choice with the bases loaded scored Hall from third.

Kennesaw State tacked on four more runs by the end of the game, earning a series sweep with a dominant 10-1 victory. White pitched only two innings, taking the loss for the College while giving up six runs on nine hits and two walks. Gabe Friese won his third game of the season for the Owls, pitching eight strong innings, allowing three hits, four walks, and one unearned run while striking out five.

The Tribe travels to Richmond on Tuesday to take on the Spiders to conclude the four-game road trip. The game is scheduled to begin at 3 p.m.