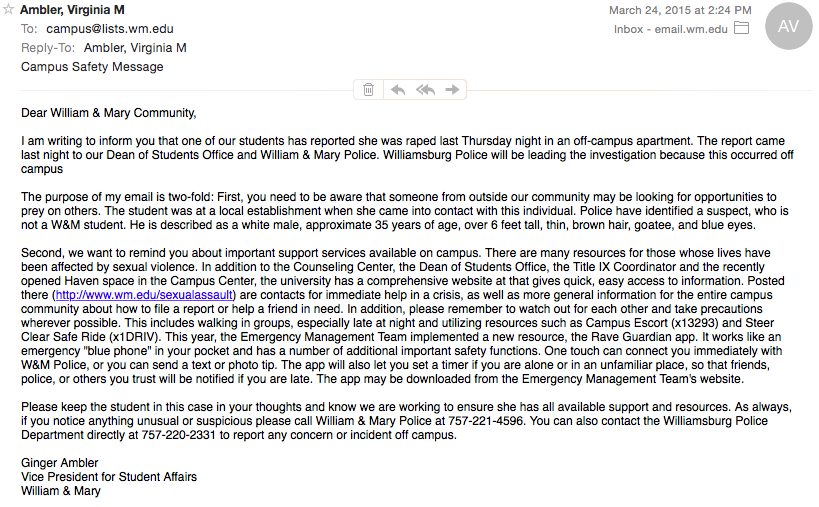 Note: This story is developing and will be updated as more information becomes available.

A female student from The College of William and Mary reported being raped off-campus Thursday night, according to an email sent to students, faculty, and staff Tuesday afternoon. The email, sent by Ginger Ambler ’88 Ph.D. ’06, Vice President for Student Affairs, indicated that the incident was reported to the Dean of Students Office and the William and Mary Police Department Monday night.

Williamsburg Police Department spokesman Major Greg Riley said the police department was informed of the incident at 8 p.m. Monday night. According to Riley, the victim was returning home from an establishment on Richmond Road and Scotland Street when she met the suspect. According to Riley, the student returned to her residence with the suspect and was not abducted.

“The incident is under investigation and we are taking this matter very seriously,” Riley said.

Captain Ed Schardein of the William and Mary Police Department confirmed the information provided in the email. He could not comment on the specifics of the case, because it is still under investigation.

“[The William and Mary Police Department] will play whatever role the Williamsburg police needs assistance with,” Schardein said.

According to the email the student was at a local establishment the night of the incident. The email said the police have identified a suspect described as a thin white male, approximately 35 years old, over six feet tall, with brown hair, a goatee, and blue eyes. It was unclear at the time of the email whether the suspect was in custody. Update (3:31 p.m.): The suspect is not in custody. The Williamsburg Police Department said they plan to make contact with the suspect.

“The purpose of my email is two-fold,” Ambler said in the email. “First, you need to be aware that someone from outside our community may be looking for opportunities to prey on others.” Ambler also directed students to resources available for those affected by sexual violence.

“In addition to the Counseling Center, the Dean of Students Office, the Title IX Coordinator and the recently opened Haven space in the Campus Center, the university has a comprehensive website that gives quick, easy access to information,” she said.

A spokeswoman from The Haven, an on-campus resource for students learning about and recovering from sexual assault, said that The Haven was available for students.

“We are here to support anyone in the William and Mary community who is affected by sexual violence,” she said. “We are a confidential resource for anyone that was affected by this incident.”

A Freedom of Information Act request submitted by The Flat Hat determined that there have been four forcible rapes reported to the Williamsburg Police Department since 2009, and four reports of sexual assault. All the victims have been female.