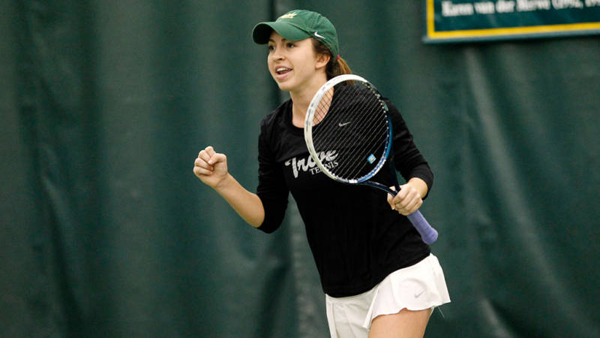 After two disappointing losses at Yale and Rice, No. 50 William and Mary looked to bounce back in its two game spread this weekend. In a pair of dominant showings, the Tribe managed to do just that, emerging from the Saturday afternoon game against Brown with a 6-1 victory, and eviscerating St. John’s to the tune of a 7-0 victory.

In game one doubles, the Tribe got off to a slow start, but persevered to win a grueling set. The Brown pairing of Danya Lord and Alyza Bennotto found victory at the number one spot with a final score of 7-6. At the No. 2 spot, the freshmen duo of Maria Groener and Olivia Thaler claimed the Tribe victory with a 6-4 win over the Bears’ duo of Hannah Camhi and Maddie Stearns. With the victory, the duo has racked up thirteen wins on the season. Finally, junior Julia Casselbury and freshman Cecily Wuenscher escaped with a win in a tough tiebreaker set by an 8-6 margin, securing seven of the last nine points.

While the Tribe and the Bears wrestled over the double rounds, the College dominated singles competition at the No. 1 through No. 5 positions. At the No. 1 position, junior Leeza Nemchinov made a spirited comeback, finishing the final two games of her three set match 6-4, 6-2, after dropping the opening the set 3-6. Nemchinov increased her season win totals to 21, including a record of 13-1 at the number one spot.

At the No. 2 spot, senior Jeltje Loomans won the first two games of her two-game set 6-2 and 6-1. With the team score at 5-1, Thaler won her opening set, and managed to outduel her opponent in a tie-breaker. The win allowed the Tribe to clinch the victory 6-1 over the Bears.

On Sunday, the Tribe picked up where it left off, carrying momentum into a dominant performance against St. Johns. This time around, the Tribe had no problem winning the majority of its doubles matches. At the No. 1 spot, the Tribe pairing of Loomans and Nemchinov pieced together another strong performance, ultimately securing a 6-2 victory. Not to be outdone, the pairing of Groener and Thaler also submitted a strong performance as they emerged victorious with a 6-3 victory over Anastasia Polyalova and Stephanie Elgegren. St. Johns battled back with a 6-0 win over the Tribe in the final doubles set.

In singles competition, the Tribe notched easy wins at the No. 2, No. 5, and No. 6 positions. Nemchinov once again provided a strong and stable performance from the No. 2 spot, racking up a pair of victories by 6-4 and 6-2 respectively in the first two games of the three game set. At the No. 5 position, Groener secured 6-0 and 6-1 wins over the Red Storms. Finally at the six position, Wuenscher earned 6-0 and 6-2 victories over St. John’s’ Jaide Collins as the Tribe cruised to a 7-0 victory over St. Johns.

Next up, the College heads to West Virginia to take on DePaul, Saturday at 11 a.m.