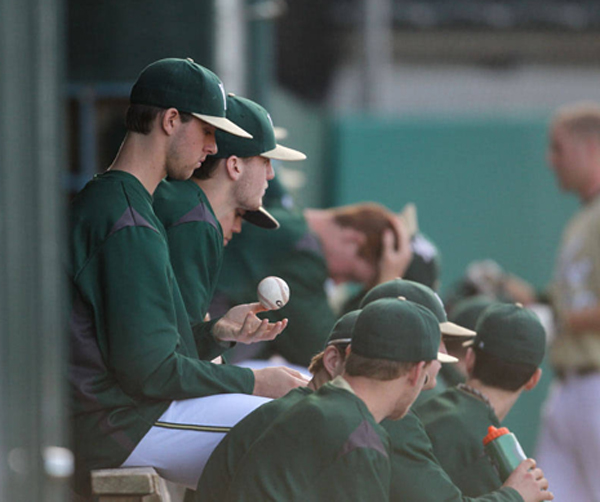 If anything, the 2015 performance of William and Mary baseball can be called consistently inconsistent as it reaches the midpoint of the season.

After breaking its six-game losing streak last weekend in the second game against Elon, the College entered another midweek slump with two consecutive losses this week, defeated by both Radford and Old Dominion — squads of fairly average talent. The regular season is 25 games in and has 26 left before the Colonial Athletic Association Championships, and the Tribe sits at 12-13, one game under 0.500.

Last year, the Tribe fell to Charleston in the CAA Championship game in a 6-4 decision. The College also won the regular season in 2014 with a stellar 15-5 conference record. Yet already this season, the Tribe is 4-2 in the CAA after losing one each to Hofstra and Elon, not a promising indication of good things to come. The College is now tied for third with Elon behind leader Charleston and second place UNC-Wilmington.

So, what makes the team inconsistent this year? Almost all facets of the College’s game, from fielding to batting to pitching, need improvement to secure more wins.

Almost all facets of the College’s game, from fielding to batting to pitching, need improvement to secure more wins.

In batting, it’s important to look at the hits statistics. Specifically, I looked into how many players per game have multiple hits and how often the Tribe loses when only a few players have multi-hit games. After tallying up the hits, the College has had 11 games where one or fewer players have contributed multiple hits, and it is 2-9 in these games. It’s possible, albeit unlikely, that the Tribe has just been unlucky with excellent pitching from the opponents, but the accuracy of its bats clearly needs work.

The Tribe’s pitching could use work as well. The Tribe has struck out 207 times this season compared to only 146 strikeouts by its pitching core. The batting average of the College is 0.249, eclipsed by the 0.303 of its opponents. Additionally, the team has stranded 192 men on base during the season, showing that many of the close games could have gone the other way had the batting been more consistent at the plate. After seeing the Tribe play a couple of games at Plumeri Park this year, I believe the players need to have more patience at bat and not swing so early — and also get to first base faster.

Strikeouts are important but not the only important part of the position. The Tribe has three pitchers in its main starting core while rotating other pitchers in. The starters, sophomore Nick Brown, junior Aaron Fernandez and senior Jason Inghram, have a combined earned run average of 3.76, significantly better than the opponent average of 5.05. The starters are 5-6, which is consistent with the Tribe’s overall record as it is also just under 0.500. They’ve contributed 76 of the 146 strikeouts but also have put men on base from adding up four balls for the opposition 43 times. Another surprisingly high statistic — the ¬College has put batters on base 30 times for its opponent through hitting the batter with a pitch.

Brown is currently the Tribe’s best starter and, as a sophomore, brings optimism for Tribe pitching in seasons to come. The College has not shut out any opponents this season, but has also only been shutout once, in its most recent loss at Old Dominion.

The last area that needs improvement is fielding. The main problem in fielding this year has been errors. There have been 35 errors this season, and the team has made at least one error in 19 of its games. College-level players aren’t perfect, but errors in the infield have led to giving up runs that otherwise may not have come across the plate.

Due to weather, the College has played seven doubleheaders in just 25 games, making 14 games, or 56 percent of the season, played in doubleheaders.

Some of the problems with the team likely stem from inclement weather. Rain and snow have definitely been a factor this year, as the school shut down several times early in the semester, leaving athletic teams unable to practice as the facilities were closed. The Tribe’s season began with postponed games and cancellations in six of its first nine games. Four additional games have been postponed or canceled since those games for rain delays. Due to weather, the College has played seven doubleheaders in just 25 games, making 14 games, or 56 percent of the season, played in doubleheaders. Doubleheaders are a rarity in professional play, and it is understandable how they take away from the performance of the players. The Tribe is 7-7 in doubleheaders and has won two, lost one and split the remaining four. Other than weather and doubleheaders, the inexperience of the team is also a factor. 20 of the 32 players are freshmen and sophomores, meaning each rained out practice or snow day robs these younger players of valuable practice time.

Looking forward, the College has six conference series and several midweek games remaining before the championship tournament, held May 20-23 in Charleston, S.C. At the halfway point of the season, the Tribe has a lot to work on but has time to improve by the end of the season to get a winning record again as it did before it lost eight of its last 10 games.