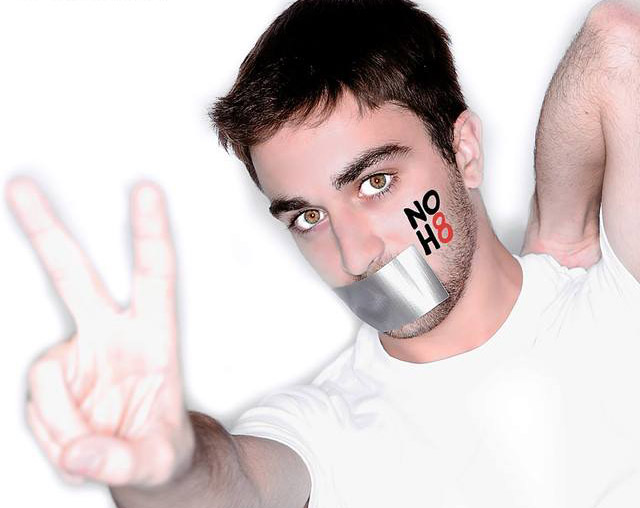 The NOH8 campaign held an open photoshoot at the College of William and Mary’s Sadler Center April 25.

Founded in 2008, NOH8 was created as a form of photographic protest in the wake of the Proposition 8 ballot initiative that illegalized same-sex marriage in California.

“It’s just a way to show support for LGBT individuals and other allies,” Tyler Brent ’15, one of the event organizers, said. “[NOH8’s supporters include] people from all walks of life — celebrities, actors, NFL players, politicians, activists and advocates alike.”

During the shoot, around 150 participants took photos while wearing white t-shirts, temporary tattoos bearing the words “NOH8” and a piece of duct tape covering their mouths.

These elements symbolize how different people, particularly LGBTQ individuals, are silenced through discrimination.

An additional aspect of the photoshoot was a Q&A session with Spencer Perry, whose mothers were the lead plaintiffs in Hollingsworth v. Perry, the 2010 case that legalized same-sex marriage in California and overruled Proposition 8.

During his speech, Perry discussed the importance of LGBTQ rights beyond marriage equality.

“LGBTQ people are more likely to kill themselves, more at risk of rape and more likely to be killed by hate crimes than any other demographic,” he said. “So, why fight? Each and every one of those statistics is validated when your government says the majority gets this, but the minority doesn’t because it makes the majority uncomfortable. Because you’re different, because there are less of you, marriage is a straight thing. The fight for equal rights doesn’t end with ‘I do.’ It’s lives that we’re fighting for.”

Brent began planning for the event in November 2013, when he attended a NOH8 photoshoot held at Old Dominion University. He asked NOH8 representatives about holding a similar photoshoot at the College, but he did not receive a response until summer 2014.

In September 2014, Brent, a Student Assembly senator, wrote a bill to allocate funding for bringing NOH8 to campus as a diversity initiative.

Although the photoshoot took several years to plan, Brent said he thought the timing worked out well, as the Supreme Court heard oral arguments regarding same-sex marriage only three days after NOH8’s visit.

The day of the event, members of the community including College President Taylor Reveley, Vice President of Student Affairs Ginger Ambler ’88 Ph.D. ’06, athletes, students involved in Greek life and professors all came out to show their support.

Michelle Tansey ’16, who worked with Brent to plan for the event, said the event also drew numerous out-of-state participants.

“I saw so many people from miles around, who aren’t students, come out and proudly hold their partner’s hand in our student center to spread a message of love and courage to others,” she said in an email. “They told me stories of taking off work or staying in the Friday night before so they could drive here and support this event. One couple postponed seeing their daughter who lives far away so that they could come and hear Spencer talk and take their photo. Events on campus get hundreds of ‘likes’ on Facebook and people to attend their events, but it’s so vital for students to interact with our surrounding community like the photo shoot enabled us to do.”

Brent said he hoped the event highlighted the large number of students at the College who are supportive of LGBTQ individuals.

“I think the awareness of having an event like this that’s very pro-LGBT students is good to just show how the College is changing in many different ways, in positive ways,” he said, “and I’m hoping that when students are looking to come to the College or they’re deciding on universities they’ll be able to see this as just one [more positive] thing.”