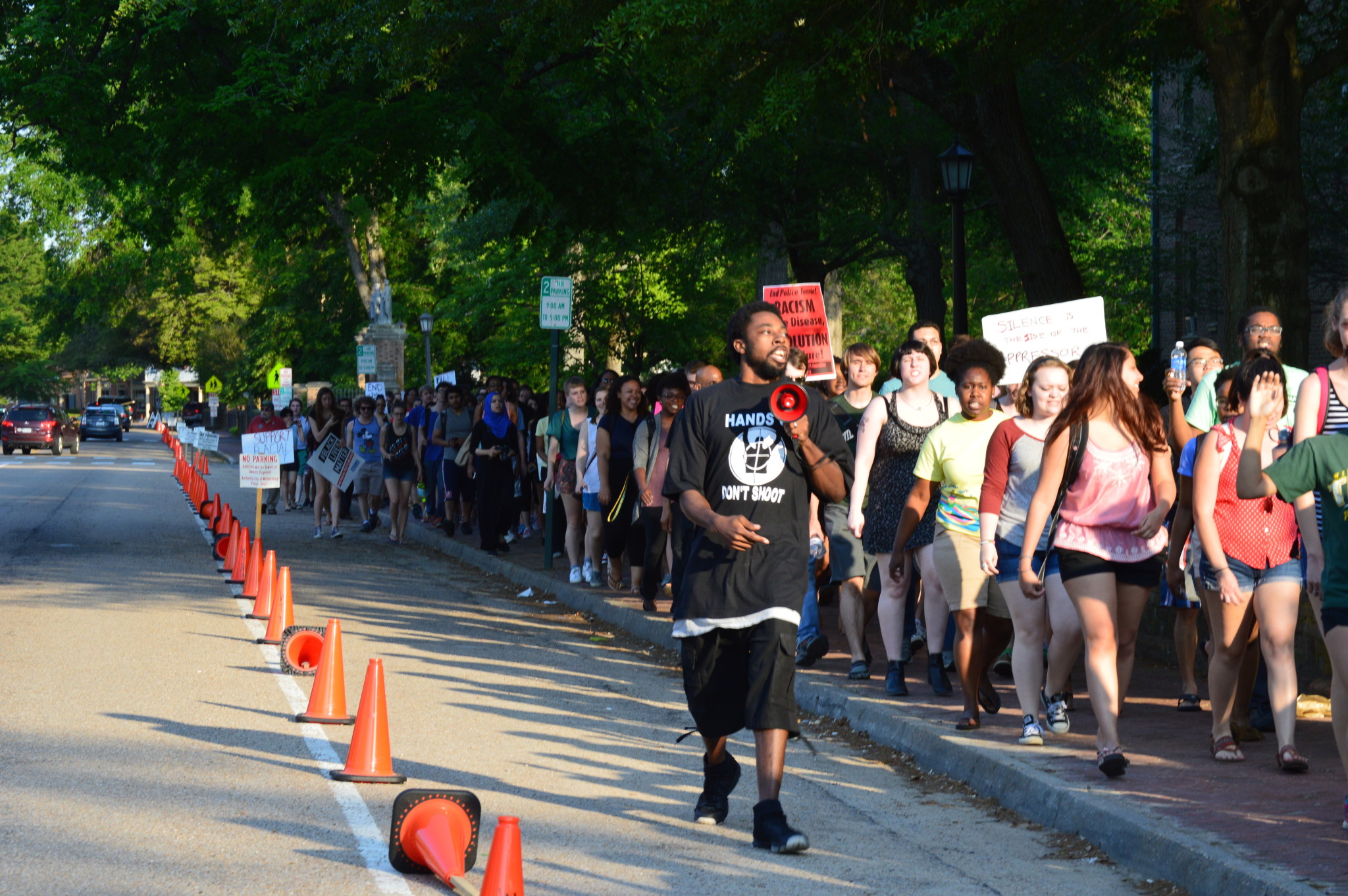 College of William and Mary students and Williamsburg community members participated in a march to “Shut Down Richmond Road” Monday, May 4 as a protest against policy brutality. The event was organized by Nadia Ross ’17 in light of the most recent death of a black civilian caused by police in Baltimore, Md.

Freddie Gray lengthens the list of names of black men who have died at the hands of police officers in the United States over the past year. Arrested April 12, Gray died in a hospital a week later from a fatal spine injury sustained at some point during the arrest. This is one of several protests organized by students this academic year.

November 25, 2014 students participated in a nationwide phenomenon by holding a Black Lives Matter protest organized by Travis Harris, a first year American studies Ph.D. candidate. The protest followed the decision from Ferguson, Mo. to not press charges against Darren Wilson, an officer who shot and killed an eighteen-year-old black male, Michael Brown, earlier that August.

Ross said she was inspired to organize the event while watching news of the riots in Baltimore, which began less than 24 hours after Freddie Gray’s funeral Monday, April 27. The riots prompted Maryland Gov. Larry Hogan to declare a State of Emergency that same day, which was not lifted until May 6.

“I was just thinking that with the violence — people use the violence as a distraction from the actual cause so I kind of wanted to bring that back in any way that I could.”

“I was just thinking that with the violence — people use the violence as a distraction from the actual cause so I kind of wanted to bring that back in any way that I could,” Ross said. “I would just wait around for people to organize these kinds of things but then I was thinking about it and I was like ‘why not? Just do it and see what happens.’ So I did and I’m glad I did.”

The march began in front of the Sir Christopher Wren Building. Before it began, Ross addressed the crowd from the steps of Wren, reminding them that the purpose was to protest police brutality — not to protest the police. She emphasized that the march was for the victims.

Ross contacted both the Williamsburg and William and Mary Police Departments during the planning stages. They helped her obtain a permit and plot a safe route to march down Richmond Road. Officers from both departments were stationed along the way for security measures and to help direct traffic.

The diverse crowd was a highlight for some of the students protesting. According to Makayla Donigan ’17, members of a variety of campus rights groups were present.

“That William and Mary students take time out in the middle of finals really shows a lot about how our community can come together and work at an issue that is affecting the national population.”

“I’m really surprised about the turn out, actually very pleasantly surprised. I feel like it’s a pretty diverse crowd. It’s not just black rights groups, there are a lot of LGBTQIA rights groups … and a lot of unaffiliated people that are just concerned about the issue,” Donigan said. “That William and Mary students take time out in the middle of finals really shows a lot about how our community can come together and work at an issue that is affecting the national population.”

Erica West ’17 and Kyle Lopez ’17 both noted how many supporters came from somewhere other than just the black community. Lopez said he participated because police brutality is not just relevant to him, but also to the people he cares for, and that it’s something people need to be making a fuss about.

“I came for a number of reasons,” West said. “One, obviously because black lives matter and two, because policy brutality in this country has clearly gotten out of control even beyond the way it has been historically.”

Tension grew at the end of the protest as Harris led chants from the Wren steps when a white woman approached the group with phrases of her own. At first she yelled “all lives matter” and “all alone” in response to the protesters’ “black lives matter” from one side of the steps. As Harris continued to lead the group, ignoring her, the woman approached him, climbing the steps while yelling. Some members of the crowd stepped in, holding their signs in her face in a tense standoff of words, as Harris removed himself from the situation. Two undercover police officers intervened and apprehended the woman.

Ross said she was happy with the event, despite the woman’s interference. She said that with all of the positive energy from the crowd, she didn’t expect anything negative to happen.

After the woman was taken away, the event continued with a moment of silence and a performance of “We Shall Overcome” by Jordan Gilliard ’18.