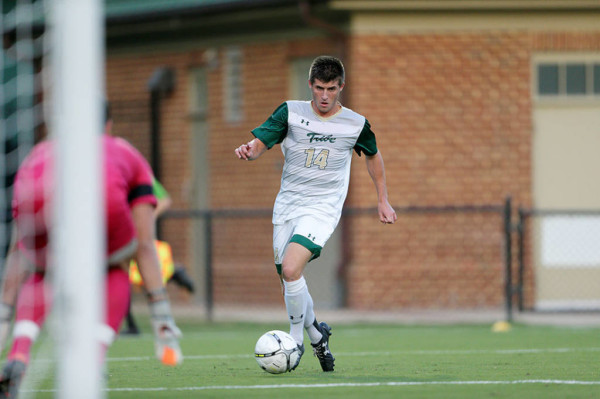 For the second consecutive game, sophomore midfielder William Eskay and William and Mary found themselves in golden goal overtime, this time against Longwood in Farmville, Va. Saturday night. In the 104th minute, Eskay scored the game-winning goal for a 3-2 victory.

This time was different from last Tuesday’s 0-0 draw against Charlotte. Eskay had seen the Lancers (3-2) before — in last year’s preseason, Eskay scored his first collegiate goal during a match with the Lancers en route to a 4-1 win. A year later, after his first shot rebounded off Longwood keeper Carl Carpenter, Eskay fired in his fourth goal of the season. Eskay’s four goals already match his 2014 total, building on a rookie campaign that earned him a place on the Colonial Athletic Association All-Rookie team.

The Lancers nearly foiled the Tribe on the first leg of a three-match road trip, and head coach Chris Norris was understandably relieved by the victory.

William and Mary’s young attacking corps stepped up during the lengthy match. Eskay, the College’s top scorer of 2015 thus far, as well as freshman forwards Antonio Bustamante and Ryder Bell scored in Saturday’s game. Between the trio, they boast nine goals and two assists on the season.

Bustamante opened the scoring in the 20th minute, dribbling to the top of the Lancer’s box and hammering a shot into the lower right-hand corner. The Tribe continued to bombard Longwood’s goal with accurate shots. Carpenter made four saves in the first half while nine additional shots went wide of the target.

However, the Tribe’s attack dulled after halftime allowing Longwood to take a 2-1 lead through Mo Jalloh, who slid home a shot from a through pass at the 56-minute mark for his first collegiate goal.

With 15 minutes remaining in regulation, the College popped up again to tie the score at two goals apiece. Bustamante curled in a free kick toward Bell, who then planted a header past Carpenter.

The Tribe’s offense reawakened after the equalizer. Eskay had a shot blocked, and Bustamante and junior forward Reilly Maw spurned chances in the first extra time period. Eskay’s goal came on the fifth shot of overtime and 26th of the game.

Despite the Tribe’s success going forward, the defense showed areas that need improvement as the Tribe conceded two goals. However, the defense did lock out the Lancers’ top scorer, Willy Miezan, who had one shot off the bench.

The College features four new defenders and a new starting goalkeeper after graduating the entire back line last year. The Tribe back line has conceded an average 1.5 goals-per-game so far, almost matching last year’s 1.44 mark.

The Tribe will continue its long road trip against Navy (3-3-1) Sept. 22 before kicking off its CAA slate at College of Charleston (3-2-1) Saturday.