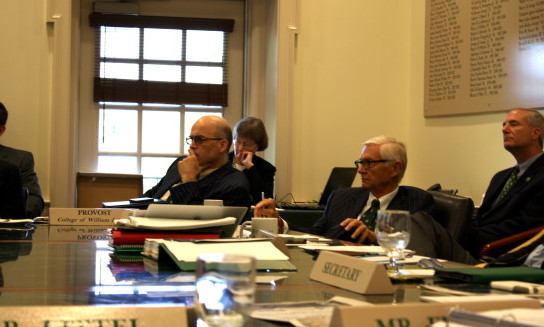 After welcomes and a rendition of “Happy Birthday” for Board of Visitors member Justice John Thomas, the full board of the College of William and Mary launched into opening remarks and committee updates Friday, Sept. 18.

Rector of the College Todd Stottlemyer ’85 offered his opening remarks, highlighting the BOV’s retreat at Mt. Vernon in July.

In regards to the BOV’s annual retreat, many members stated their approval of moving the retreat to July, rather than August as it has been in the past, because the move gives the College administration more time to act on discussions during the summertime meeting. Stottlemyer also offered thanks to all who helped put on the BOV retreat.

Following Stottlemyer, College President Taylor Reveley made his remarks to the full board.

“By all reports, and as far as that I can see, William and Mary is off to a really, smashingly successful beginning of its 323rd year,” Reveley said. “Already an amazing amount of teaching and research and learning has been going on.”

Reveley remarked on the number of initiatives currently underway at the College, looking to address sexual violence, mental health and the campus’ racial climate. He also commented on College traditions and the success of this year’s opening ceremonies.

“One of the huge comparative advantages of schools is the nature of our annual rhythms,” Reveley said. “We have the most wonderful beginnings and endings. We have powerful traditions that we exercise every year. We wander around our great ceremonies on occasion carrying maces, silver maces. We get dressed in stuff that would, for these occasions, normally be restricted to Mardi Gras or Halloween, and we don’t even feel goose-like while we do it. But those sorts of rhythms and ceremonies, including the predictable arrival of reinforcements, new students, new faculty and staff, really do add a richness and an elegance to academic life. When they all go well at the beginning of the year, it’s particularly nice.”

“Somehow we both got up this morning and both put on our blue and white striped zoot suits and we both put on our official griffin tie,” Reveley said. “It was an absolute accident.”

Reveley also discussed the ideal weather for this year’s key fall events, like freshmen move-in and the faculty picnic. Finally he commented on the fact that he and Provost Michael Halleran had in fact shown up to the meeting in the same outfit.

“Somehow we both got up this morning and both put on our blue and white striped zoot suits and we both put on our official griffin tie,” Reveley said. “It was an absolute accident. I didn’t pay any attention to it until I actually looked at Michael and thought ‘Good lord.’ Anyway, everything is going well.”

President of Richard Bland College Debbie L. Sydow gave her updates to the full board. She pointed out that Richard Bland experienced a 20 percent enrollment increase and that the school’s honors population has risen 300 percent. Sydow stated that Richard Bland’s current focus is on improving academic excellence.

After Sydow’s statement, Chairman of the Richard Bland College Committee John Littel gave the board a business-oriented perspective on Richard Bland, discussing the 2016-18 budget and faculty and professional staff appointments. All the resolutions brought forth by Littel were passed.

Next, for the Committee on Audit and Compliance, Thomas talked about the College’s efforts to adhere to Title IX requirements, as well as progress in the College’s audit. Thomas stated that the College has hired a Title IX compliance investigator, Carla Costello.

When it comes to auditing, Thomas said that there were some issues with the audit of the Student Health Center, but that a better system was put in place to correct those issues.

For Athletics Committee updates, BOV members visited new sports facilities, including renovations and additions to Zable Stadium and a new batting facility, earlier in the week. The Athletic Committee also discussed the move of some larger conferences in the NCAA and how this may affect the College’s athletics.

Chairwoman Ann Green Baise of the Committee on Administration, Building and Grounds discussed the construction work over the summer.

“Things are moving along, and I am so happy to say that we have sorority girls back in their house that has been redone, Chandler is up and running, so we have students where they need to be,” Baise said. “We demolished Braxton, which was some sort of an eyesore on the back side of sorority court and there are some suggested plans of what we should do with that ground area.”

Baise brought forth five resolutions — including resolutions 9, 10 and 11, which addressed the creation of a wellness center that was discussed in the six-year plan. After seeing that there was some extra money in the budget last year, the wellness center was moved up and funding was secured. The wellness center is planned to take the place of the lodges, although the lodge housing The Daily Grind is expected to stay put. All of Baise’s resolutions were adopted.

Chair of the Committee on Finance Kendrick Ashton Jr. ‘98 reported on the state budgeting process. He moved for the approval of four resolutions, two regarding main campus and two regarding VIMS; all were passed.

“Some [students] are quite prepared for college; they know to knock on faculty doors, they know how to get help — others do not. And so the idea behind this plan is to make sure that we have resources available to make sure that every student is ultimately aware of the access of the systems, advice and advisors as they go through the curriculum,” Scott said.

Chairman of the Committee on Academic Affairs Robert Scott J.D. ’68 gave his updates to the full board. He highlighted the success of the online MBA program, which has 50 students enrolled, and 60 are anticipated to enroll in January.

Scott addressed the transition to the COLL curriculum, stating that the transition will continue as the GER system is phased out. He also discussed the Quality Enhancement Plan, which is part of the accreditation process for the College. He stated that the goal emphasized in this plan is to make sure that every student is prepared for the COLL 400 class.

“Basically the notion is that students come to William and Mary from different cultural backgrounds,” Scott said. “Some are quite prepared for college; they know to knock on faculty doors, they know how to get help — others do not. And so the idea behind this plan is to make sure that we have resources available to make sure that every student is ultimately aware of the access of the systems, advice and advisors as they go through the curriculum.”

The Committee on Academic Affairs also heard updates from the Office of Admissions and faculty liaison Elizabeth Barnes. All of the resolutions put forth by Scott were approved.

Stottlemyer then addressed old business and gave out thanks prior to adjourning for executive session.