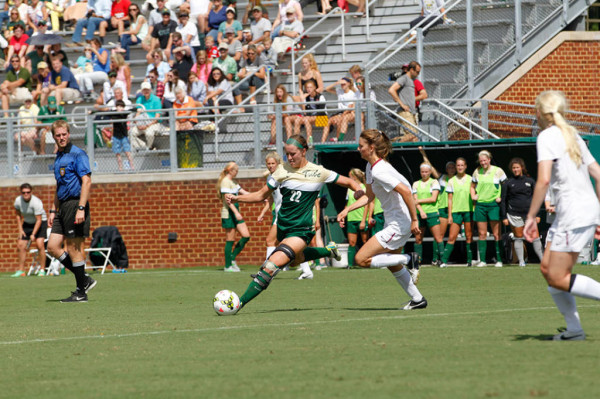 As the Tribe opened conference play Friday night at Martin Family Stadium against Hofstra, one of their most distinguished alumni was on hand for the action. U.S. Women’s National Team coach Jill Ellis ‘88 returned to William and Mary for the weekend and attended Friday’s game after meeting the players at practice Thursday. With one of their most prolific forwards in the crowd, the Tribe took on another in Pride forward Leah Galton, who led Hofstra to a 2-1 victory.

William and Mary (7-3-1, 1-1 Colonial Athletic Association) opened the game with some very sloppy play, misplaying passes and lacking patience in possession. At one point, head coach John Daly substituted a majority of his starters to see if his bench could provide more organized play.

“We played, I thought, very poorly in the first half. We gave them way too much time and space to play. We really didn’t threaten, we made poor decisions,” Daly said.Hofstra (8-3, 2-0 CAA) capitalized with the speed of their top scorer Galton, who carried the ball through midfield and into the Tribe half faster than the College’s defense could get back. Galton opened the scoring by beating a defender to the ball and quickly releasing a shot into the top of the net. The ninth-minute goal put the Tribe in an early hole that they never overcame.

Much like in the Princeton match, the Tribe took until the 20th minute to record its first shot of the game. Junior back Clara Logsdon forced the only save Hofstra goalkeeper Freiderike Mehring had to make the entire half, while senior goalkeeper Caroline Casey stopped three shots in the opening period. William and Mary was called for 10 fouls in the half, which Daly felt was a result of poor officiating.

“I thought the referee was weak, and he let them get away with it. Ironically, we had ten fouls and they had five, so I don’t know how that worked out. Poor official, but he didn’t decide the game,” Daly said

Hofstra took a 1-0 lead into the break, when one of the highlights of the night took place. Jill Ellis addressed the crowd in a short speech, lauding William and Mary for its role in her development.

Following the interval, Hofstra continued to take the game to the College. Galton beat the Tribe’s defense again soon after the restart, bringing down a header from a teammate and slapping the ball into the goal. Daly said the Tribe had planned to keep her off of her favored left foot, though they failed to do so on both of her goals.

“[Galton] was on a bit of a roll tonight, scoring both their goals. If anything, it gives us something to go back and watch film on, and try and learn from,” Casey said.

The game continued its physical pattern in the second half. After Logsdon helped the Tribe pull a goal back off of a corner from sophomore back Haley Kent, the tension between the teams and the official reached a boiling point. Upon being called for a suspected foul, Tribe senior midfielder Samantha Cordum was taken off the pitch for yelling at the bench following the decision. The Tribe could not overcome their defensive mistakes, and fell to Hofstra by a final score of 2-1.

Cordum and the Tribe bounced back with a dominant 3-1 victory against Northeastern (7-4-1, 0-1-1 CAA) Sunday. Cordum scored the first Tribe chance in the 15th minute, beating a defender and finding the back of the net for her fifth goal of the season. In the second half, Cordum finished a through ball from sophomore forward Sami Grasso, doubling the Tribe’s lead.

The Huskies pulled one goal back in the 65th minute, as midfielder Valentina Soares Gache headed in their corner. However, Cordum finished off her hat trick by cheekily lofting the ball over the keeper, recovering the College’s two-goal lead for good.

The Tribe will continue its string of conference games, heading down to face the Phoenix of Elon University next Friday, October 2. The game is set to kick off at 7 p.m.