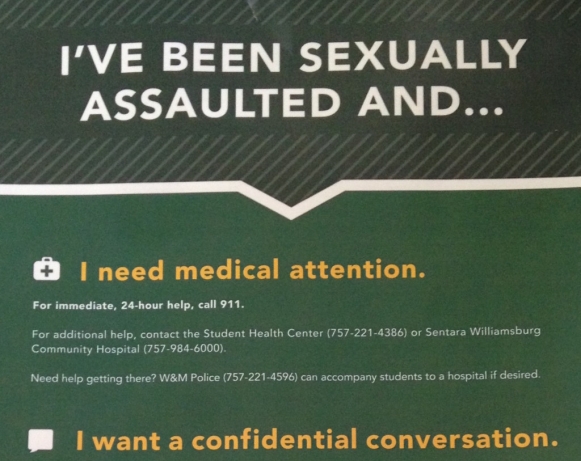 The Education and Prevention Subcommittee of the William and Mary Task Force on the Prevention of Sexual Assault and Harassment recently released its findings in the Task Force Final Report Sept. 10, 2015.

The subcommittee focused first on assessing the College’s current education and prevention practices. For most students, education on sexual violence and harassment prevention begins with New Student Orientation and ends a few weeks later with the completion of the HOPE Essential First Year Initiatives, formerly known as Extended Orientation.

“William and Mary was doing what most colleges have been doing, which is concentrated, very narrowly focused educational programming through the initial orientation to extended orientation,” Cheesebro said. “Through feedback from students and through research, it is apparent that the ‘one and done’ model is not as effective as we need for it to make a positive impact on the situation.”

Vice President of the Healthy Relationships and Sexual Aggression branch of HOPE Julia Canney ’16 discussed the importance of establishing sexual violence education as a cumulative process that would continue throughout a student’s four years at the College.

With this in mind, the subcommittee formulated new strategies and recommendations with the ultimate goal of making education and prevention more comprehensive and inclusive of all academic years on campus.

“We can’t undo 18 years of indoctrination in 45 minutes of Extended Orientation,” Garrison said. “One of the things that we hope to start doing is developing ‘touchpoints.’ For example — you would take the Haven module, or you would do Extended Orientation. Maybe your hall would do a presentation, or your organization. We want to have seven, eight, nine touchpoints to really get those messages through.”

These “touchpoints” would occur throughout a student’s four years at the College, and would build upon one another in cumulative succession. For example, a student’s junior year touchpoint would reference the messages derived from their sophomore and freshman year touchpoints.

“These messages have to be renewed like a driver’s license,” Garrison said. “We need to continue with education that is time specific and developmentally appropriate.”

One of the most significant recommendations made by the subcommittee is the formation of a Student Welfare Statement to be included in the College’s overall mission and values statement. This statement would declare the College’s dedication to supporting student health on a physical, psychological, and emotional level. By including a statement of student welfare, the subcommittee believes that the College administration can not only add legitimacy to its education and prevention efforts, but also create a precedent for future initiatives.

“In public health, we look at a systems approach,” Garrison said. “It’s really important that our mission reflects the well-being of our students.”

“We are already seeing change,” Cheesebro said. “Often you’re afraid that you’ve put a lot of work into a study and then it gets put on a shelf and you don’t see a lot of immediate action.”

Taffet was on of the two students on the committee. With regard to the proposed value statement, he noted the importance of having a value structure before action can take place.

“This is very much a symbolic thing, but it needs to be there,” Taffet said. “You can’t act without a set of values, and I don’t think that we have quite developed our values system yet as a school. All of the rest of the recommendations for action stem from this value statement. The importance of the value statement, in particular, is by stating those values, it sets a precedent to suggest things which may be a little tougher to implement.”

The subcommittee also addressed the discipline and screening of those individuals who have previously been accused of or found guilty of committing acts of sexual violence. With regards to screening, the subcommittee recommended that the College should consider the criminal records and disciplinary history of potential students in the admissions process with the goal of weeding out students who pose a threat before they join the College community. This applies to seniors in high school who may be applying to the College, but is more directed at students looking to transfer to the College from other institutions.

“This is an area of national dialogue right now,” Cheesebro said. “The question becomes, for really all of higher education, should that kind of information be carried in a transcript so that the new college has the opportunity to review it and evaluate it prior to making a decision? Or should it be entered into a transcript only if the student has gone through a full hearing? Or should a student just be asked to fully disclose any legal allegations or findings? It’s an extremely complex situation where many variables come into play. The important point is that William and Mary, like any other college, needs to assess all of these possible situations and determine how we vet applicants to come on the campus as transfer students so that we can ensure the safety of our current students.”

In addition to this, with regards to the frequency of punitive action, the subcommittee recommended that the College work with the William and Mary Police Department to not only encourage survivors to report incidents of sexual assault and violence, but to also support survivors throughout conduct and legal processes that may bring consequences to the perpetrator if found guilty.

“We are already seeing change,” Cheesebro said. “Often you’re afraid that you’ve put a lot of work into a study and then it gets put on a shelf and you don’t see a lot of immediate action. It’s wonderful to see that the College already has supported some of the recommendations by initiating some new staff dedicated just to this issue. We’ve seen increased reporting on campus to our office and we’re already seeing changes in specifically the Title IX process as well. We’re never going to stop working on this issue.”