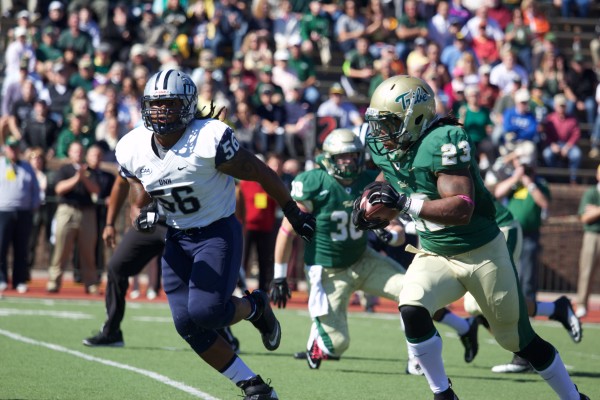 For football fans coming into Williamsburg, Va. for the Tribe’s homecoming matchup against Hampton this Saturday in Zable Stadium, here’s some advice.

Take a left out of Stadium Drive, get over to Lafayette Street via Virginia Avenue, and then merge onto I-64 west for about 140 mile, and just keep going in that general direction till you hit Harrisonburg, Va. Then, get out of your car, buy some tickets and prepare to get hyped with ESPN’s College GameDay for the No. 11/ 12 Richmond vs No. 4/3 James Madison Colonial Athletic Association powerhouse matchup.

That’s where the real football game will be taking place this week, as the College (4-2, 2-1 CAA) has the pleasure of taking on the Mid-Eastern Atlantic Conference’s middling Hampton Pirates (4-3, 3-2 MEAC) for homecoming, a matchup that looks to be a lopsided affair.

No. 17/16 William and Mary is riding high after consecutive upsets over ranked Wildcat squads in the CAA, dispatching No. 23/22 Villanova on the road in 38-16 before returning home to route New Hampshire 34-18 at Zable. The thunder and lightning combination of junior tailback Kendell Anderson — the leading conference rusher — and senior running back Mikal Abdul-Saboor, behind a healthy offensive line, has steamrolled over the past two opponents to the tune of 206 yards rushing against Villanova and 245 against New Hampshire. Villanova stands as the No. 1 rushing defense in the conference, allowing an average of 299 yards per game, while New Hampshire remains in the CAA cellar at No. 10 in total defense allowing 428 yards per game.

The thunder and lightning combination of junior tailback Kendell Anderson and senior running back Mikal Abdul-Saboor, behind a healthy offensive line, has steamrolled over the past two opponents to the tune of 206 yards rushing against Villanova and 245 against New Hampshire.

Two completely different defenses, but the same result. The only constant has been the success of the Tribe ground game.  Junior quarterback Steve Cluley is proving himself to be a dual threat operating out of the pistol, as evidenced by his two rushing touchdowns last week.

Relative to the MEAC, Hampton looks to be a powerhouse, holding the No. 1 conference pass offense, No.3 in scoring offense and scoring defense and No.2 rushing defense. Outside the conference, the Pirates also have a few accolades, namely a near-upset over Richmond on Sept. 12, and the 17th strongest defense in the Football Championship Subdivision. Led by former Virginia quarterback David Watford, the Pirates have won their last two games.

However, Hampton’s last two opponents have a combined record of 3-9 and the Pirates have glaring losses against North Carolina A and T as well as Norfolk State on the record. For all the impressive rankings and statistics, Hampton has lost to subpar opponents. Anderson alone has topped 150 yards rushing in the past two games, certainly a greater challenge than any backs the Pirate have faced all season. A nationally ranked Tribe team riding the high of back-to-back upsets would have to make major errors to blow a game against a team the College has traditionally rolled, riding an undefeated series advantage of 5-0 against the Pirates. In 2014, the College cruised to a 42-14 victory at Zable.

Some may be prone to call Hampton a trap game, but after four seasons of narrowly missed playoff opportunities, the Tribe knows every game is a must-win heading toward November.

Some may be prone to call Hampton a trap game, but after four seasons of narrowly missed playoff opportunities, the Tribe knows every game is a must-win heading towards November. Head coach Jimmye Laycock ‘70 knows the playoff math facing the Tribe, and the only way the 2015 season adds up to a playoff berth is another tally in the win column courtesy of Hampton. This game — like every game — is too important to overlook.

Hampton may have itself a decent quarterback, but New Hampshire’s Zach Goldrich is a pretty good quarterback, too, and he couldn’t deliver the Wildcats victory last week. The College improved upon its greatest weakness in rushing the passer, knocking Goldrich around for five sacks. Watford and the Pirates will have no chance against the Tribe if Laycock can dial up that kind of pressure again this week. William and Mary is ranked No. 1 in total defense in the CAA and is in the top 10 nationally in rushing defense. Led by senior free safety DeAndre Houston-Carson, the Tribe’s secondary has also delivered this season, standing as the No. 1 passing defense in the CAA with just 166.3 yards surrendered and allowing five touchdowns while catching nine interceptions, including a pick-6 by Houston-Carson against Villanova.

Simply put, there is no compelling reason on Hampton’s roster to suggest that the Pirates can pull off the victory against the Tribe.

There is only one streak in Hampton’s favor; the Pirates ruined Morgan State’s homecoming last week by taking the game 20-10. But there won’t be a second homecoming upset, as the Tribe has too much on the line to overlook any games. I’ll be surprised if Hampton comes within 21 points of the College by the time the final whistle blows.