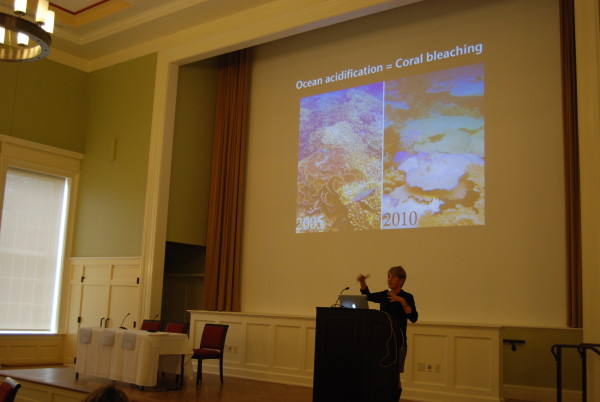 The College of William and Mary’s Committee on Sustainability held the third annual Sustainability Summit Nov. 7. The theme of this year’s summit was “Water.”

This year’s Summit leader Anna Klompen ’17 said that water was chosen as the subject because of the broad range of sustainability issues it includes. Some of these issues are safe drinking water, environmental projects, global climate control and the way water affects life in the modern world.

The Summit was held at Alan B. Miller Hall from 9:00 a.m. to 2:00 p.m., featuring a networking breakfast, two panels of guest speakers, breakout sessions and a keynote speech.

“I think the lineup was fantastic this year … those that attended learned how to attack water sustainability problems, especially right out of school through employment opportunities,” Klompen said in an email. “I think students not only need that message that they will be able to find something after college, which is a worry of most, but learn how to do it and what kinds of paths they could pursue as a career. This would apply to all students, and can start with some of the projects available right now through William and Mary Sustainability.”

Planning for the Summit started months in advance and involved teamwork from the co-chairs of the Committee on Sustainability’s Programs Subcommittee, the faculty chairs, Director of Sustainability Calandra Waters-Lake, and many student volunteers.

Symons addressed how little research has been done on the oceans in comparison with the amount of research done on the moon. She also addressed harmful practices that are destroying the deepest parts of the ocean, like trawling, a way of fishing that tears up the ocean floor and catches more fish than desired.

Symons also addressed how it is important to be aware of sustainability and its relation to the ocean. For example, restaurants should take into consideration where and how they get the seafood that they serve.

The Summit’s panel discussions featured topics like conservation biology, physical oceanography and industrial consulting. The student organization Take Back the Tap participated in the Summit and led one of the breakout sessions.

“This organization supports the use of reusable water bottles rather than use of non-reusable water bottles, which are not sustainable and support the privatization of water,” Madeleine Fulham ’19 said in an email. “This summit, therefore, was a great way for me to show my support for TBT and to learn more about how I can promote sustainability on campus.”

The Summit gave attendees opportunities to network, learn more about sustainability projects on campus and in the real world. According to Klompen, it was designed to give attendees new strategies to make a difference every day.

“The goal of the summit was that each attendee could walk away with something they can do as a habit every day to have an impact on the world once they leave, be it a major or a minor, a resource they discovered at the summit, maybe a job opportunity they had not thought about, or simply hope that they can make the changes they want to see,” Klompen said in an email. “If attendees can walk away understanding the importance of water, and share that, I think it was a success.”

As far as the future goes, Klompen foresees possible changes to the Summit such as adding more networking to the event and adding more time devoted to the panel sessions to take more questions from the audience.

“The take away message for me was that sustainability’s appeal is growing,” Fulham said in an email. “It was so inspiring to hear our speakers and see how their jobs in the real world are promoting water reform and sustainability.”