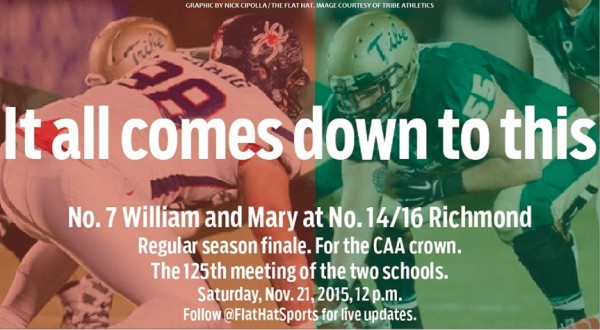 Man, could that Oct. 3 loss to Delaware look any uglier in retrospect?

Heading into the 125th game in the “Oldest Rivalry in the South” against archrival Richmond, No. 7 William and Mary (8-2, 6-1 CAA) has a single blemish on its Colonial Athletic Association record due to the Blue Hens, a loss that provides the No. 14/16 Spiders with a shot at a share of the CAA crown and a chance to take the automatic bid to the NCAA Football Championship Subdivision playoffs with a win over the Tribe in Richmond this Saturday. For the College, the outright conference title is just a victory away, with the added bonus of taking home the Capital Cup by breaking out of the 0-4 skid against Richmond (7-3, 5-2 CAA) dating to 2011. No wonder it’s a sellout crowd.

For the College, the outright conference title is just a victory away, with the added bonus of taking home the Capital Cup by breaking out of the 0-4 skid against Richmond (7-3, 5-2 CAA) dating to 2011. No wonder it’s a sellout crowd.

The stakes are high and the blood is bad between these two archrivals in a series dating back to 1898. The name “Oldest Rivalry in the South” is somewhat deceptive, as several southern collegiate teams have rivalries just a few years older, such as Alabama-Louisiana State, Virginia-Virginia Tech, and especially Virginia-North Carolina, a rivalry which shares a similar nickname “South’s Oldest Rivalry” dating to 1895. However, the Tribe and the Spiders have the distinction of hating each other the most consistently, as the Richmond-William and Mary rivalry has been played 124 times thus far, with the College holding a narrow 61-58-3 advantage. North Carolina and Virginia have only played 120 times. The 124 games are tied with Minnesota-Wisconsin for most-played rivalry in the Football Bowl Subdivision, and is the fourth most-played rivalry in the NCAA FCS, of which Richmond and William and Mary are both members.

William and Mary vs Richmond football is a unique blend of tradition and quality, as both teams rank in the top 15 of the FCS this season. But the Tribe better save some space on the bus coming down I-64 East after the game, as the College will be carrying the Capital Cup back home to Williamsburg this year.

In the past couple of games, the Spiders have been washed out of the FCS elite, falling from No. 5 with a 7-1 record perfect in FCS football to No. 14/16 riding a 0-2 streak. The pair of glaring losses to unranked CAA opponents, New Hampshire and Villanova, reveals a recent and not so itsy-bitsy problem with the Richmond squad: it forgot how to hold onto to the football. Richmond quarterback Kyle Lauletta, leading the CAA in passing yards with 2,741, doubled his interception count for 2015 in the last two losses, throwing four picks in the 30-25 meltdown loss to New Hampshire. He tossed another interception in the 21-20 heartbreaker to Villanova at the 3-yard line, essentially taking points off the board in the third quarter. The Spiders fumbled away two more possessions in the loss to the Wildcats. The recent struggles are masked by Richmond’s early success with takeaways vs turnovers, as the Spiders have the No. 2 turnover margin in the CAA at positive 6, which pales in comparison to the No. 1 team in the category —  William and Mary at positive 12.

Cluley’s conservatism will pay major dividends in this premier CAA matchup, as Richmond’s inability to pressure the quarterback compounded with the Tribe’s offensive line — the best pass-blocking unit in the conference — ought to give Cluley a day and a half to throw, even in key situations.

As quarterback for the College, junior Steve Cluley is all about ball security, throwing just two picks all season along with 13 touchdowns. Cluley’s less likely to fumble in this premier matchup as well; Richmond has the second-worst pass rush in the CAA with just 14 sacks through 10 games. The Tribe’s pass rush is not much better at No. 7 with 20 sacks, but the Tribe’s pass protection is No. 1 in the CAA as Cluley’s only gone down 11 times. The offensive line has gotten even better in recent weeks — Cluley has not been sacked since Oct. 24 against Hampton, standing tall in the pocket for three straight games.

Cluley’s conservatism will pay major dividends in this premier CAA matchup, as Richmond’s inability to pressure the quarterback compounded with the Tribe’s offensive line — the best pass-blocking unit in the conference — ought to give Cluley a day and a half to throw, even in key situations. Richmond’s third down defense is wretched; permitting opponents to convert third downs 44.7 percent of the time, the third-worst mark in the CAA. The Spider’s red zone defense is also the third-worst in the conference, allowing 82.9 percent of drives to end in points for the opponent.

The most interesting matchup on Saturday will be the Spider’s No. 1 pass offense against the No. 4 passing defense of the Tribe.  Richmond has the advantage at receiver with the No. 1 target in the CAA junior Brian Brown, hauling in 1,079 yards and five touchdowns over the course of the fall. Richmond will get by the Tribe a few times for sure, but look out for senior free safety DeAndre Houston-Carson to take advantage of one of Lauletta’s poor pass decisions.

My prediction: the Tribe wins the CAA crown and the Capital Cup in a 38-30 thriller, earning the first-round bye for the FCS playoffs.

Neither defense is particularly stellar in this matchup, as the Tribe is No. 5 in the CAA while Richmond stands at No. 7 in total yards, though Richmond allows 56.4 more yards per game than the Tribe. The College also holds a slight advantage in the rushing game, as junior tailback Kendell Anderson is the No. 1 tailback in the CAA (and No. 6 rusher in FCS) based on yardage, racking up 1,171 yards on 190 carries despite sharing rushing duty with senior tailback Mikal Abdul-Saboor. Richmond is right on the Tribe’s heels — Spiders tailback Jacobi Green is the No. 2 rusher in the conference with 1,078 yards on 173 carries. Green also has 299 receiving yards, showing a dual-threat capability that the College has to find a way to contain.

William and Mary and Richmond are very similar teams. Both emphasize controlling the clock, suffer from a poor pass rush and have excellent rushing attacks. The difference is the Tribe prioritizes ball security and conservative passing, while the Spiders open up the defense with passes downfield. It’ll be a scoring game, but one with long drives that chew up the clock. William and Mary’s opportunistic defense combined with a turnover-free offensive performance ought to be enough to outlast the Spiders. My prediction: the Tribe wins the CAA crown and the Capital Cup in a 38-30 thriller, earning the first-round bye for the FCS playoffs.