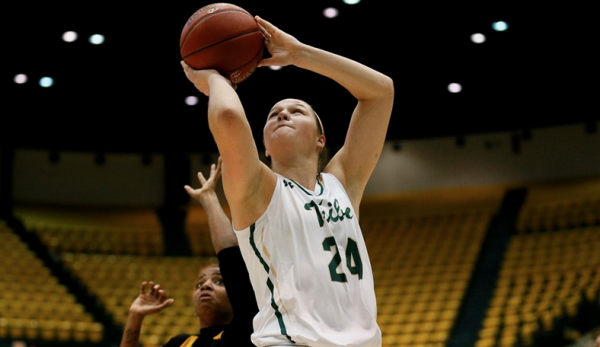 William and Mary suffered its first loss of its young season Friday night in Richmond as the Tribe fell 56-50 to the Spiders.

The College (2-1) and the Spiders (3-0) traded baskets for the majority of the first quarter, with Richmond holding a slim 16-14 lead going into the second quarter. William and Mary featured a balanced offense, with four different players scoring.

The second quarter saw a decrease in performance from both squads, with the Tribe outscoring Richmond 10-5 for just 15 total points scored. Despite the low scoring period, the Tribe came alive for a 7-0 run to close the half, getting a three-point halftime lead at 24-21.

In the third quarter, the Spiders looked to start a run of their own, but a crucial shot from beyond the arc by junior guard Marlena Tremba stopped the run and kept the College in the game.  However, two straight baskets in the paint from Richmond gave the home team a 38-33 advantage going into the final quarter.

Almost four minutes into the fourth quarter, a timely triple from freshman forward Ali Engelhardt cut the Richmond lead to one, 41-40. Despite a clutch performance from sophomore center Abby Rendle — who had six points, four rebounds, a block and a steal in the final period alone — the Tribe couldn’t match the Spider offense down the stretch, losing 56-50.

Rendle was the most dominant player for the College, amassing 14 points to go along with nine rebounds and two blocks. As a team, William and Mary managed to shoot just 28 percent from the floor in the second half.

Despite the Tribe’s lack of success on offense, the defense was strong, holding the Spiders to just 56 points on 36 percent shooting.

Tremba struggled to score against the Spiders after dominating the Tribe’s opening games of the season. Despite her below-average day, Tremba still finished with nine points while only managing to shoot 2 of 9 from the floor. Tremba found other ways to contribute, as she was second in assists with four.

Even though the Spiders handed the College its first loss of the season, there were several bright spots in the Tribe’s performance — William and Mary outscored Richmond 28-12 in the paint and had only 13 turnovers to the Spiders’ 17.

Led by Rendle, the College controlled the boards, finishing with a 40-36 rebounding advantage.

In order to elevate its game to the next level, the Tribe will have to shoot better and continue to win the rebounding and turnover battles. Working for easy shots and being able to execute them should be a team priority.

The Tribe returned to action Monday night at Loyola (Md.) in Baltimore, but the game was not finished before press time. Following Monday’s game, the College has just a two-day turnaround before facing American at Kaplan Arena Wednesday at 5 p.m.