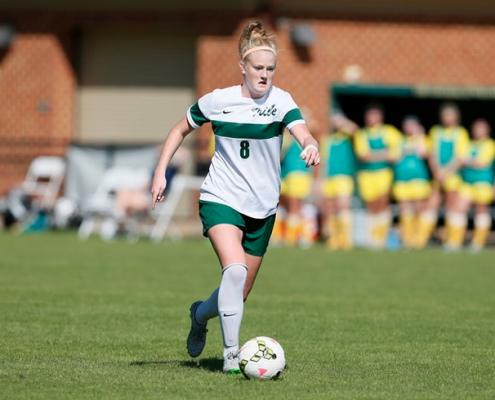 A lopsided loss seems like an unfair way for William and Mary (14-4-3) to end its successful season. For a season that included the team’s first NCAA tournament appearance since 2011, the 35th consecutive winning season in program history, and a share of the Colonial Athletic Association regular season title, last Saturday’s penalty shootout win against Central Florida seemed like a more fitting end.

Yet another solid season came to a close Friday night in Gainesville, where the Tribe succumbed to the onslaught of No. 6 Florida (18-3-1) in a 5-2 loss. It was an uncharacteristic performance from William and Mary, which has made a habit of grinding out victories with a tight defense and a one-goal margin.

Coming into the game, senior goalkeeper Caroline Casey had kept 11 shutouts, including a four-save performance against UCF in the first round of the NCAA tournament. Casey, the CAA’s Defensive Player of the Year, also saved two penalty kicks in the first-round shootout. She boasted an impressive .69 goals-against-average, and the Tribe’s defense had only once this year conceded three or more goals (in their CAA Championship loss to James Madison).

The Tribe held strong for most of the first half, and coach John Daly was optimistic despite Florida firing the game’s first eight shots.

“I thought the first half we defended well, and looked as though we might catch them on the break,” Daly told Tribe Athletics after the game.

The Tribe was living dangerously, though; the Gators hit the post within five minutes, Casey had four saves and the College defense blocked two shots.

The pressure finally paid off for Florida in the 40th minute. The ball came to forward Meggie Dougherty at the top of the box, where she rolled it forward and blasted it into the top-right corner to give the Gators the lead.

Responding well to going behind, the Tribe ratcheted up the intensity in the waning minutes of the half. Sophomore defender Elysse Branton brought a fine save out of Florida goalkeeper Kaylan Marckese, and senior forward Katie Johnston headed a corner kick over the bar. At half-time, the game was still there for the taking for the Tribe, despite being outshot 12-2 thus far.

Despite bursting out on the front foot, the Tribe was unable to make their early pressure pay off. Fifteen minutes into the half, Florida put the game to bed with two back-to-back goals in the 59th and 60th minutes.

The Tribe saved face with two late goals. Rachel Moore, the sophomore midfielder who converted a penalty kick in the shootout win over UCF, punched in another from the spot after junior forward Kady Kriner was cut down in the box. Senior midfielder Nicole Baxter tallied her tenth assist of the season when she slipped a pass through to senior forward Leci Irvin, who slid home her 3rd goal of the season.

“People getting hurt on each roster … it’s part of the game, and you just have to respond to it,” Baxter told Tribe Athletics after the game. “Us being able to do so well in our conference and then making it to this [NCAA Round of 32] is just a testament to how hard we work and our depth.”

The two could not help but wonder what could have been if key players had been healthy. In particular, the loss of senior forward Samantha Cordum deprived William and Mary of an offensive cornerstone later in the season. Cordum scored 7 goals and provided 2 assists, tying Johnston for the team’s most points despite only playing 11 games.

Daly touted the leadership of his seniors, saying that he felt “despondent” after losing Cordum.

“I would love to have seen what we could have achieved with those injured players.”

“But then, when I saw the way people like Nicole [Baxter] and Caroline [Casey] – the two captains and great leaders — were responding … I realized, ‘Well, we can still do something,'” Daly said. “I would love to have seen what we could have achieved with those injured players.”

The Tribe graduates a set of highly accomplished seniors. Senior captains Casey and Baxter were both named to the All-CAA first-team, with Casey winning the Defensive Player of the Year award. Seniors Cordum, Irvin and Johnston all won places on the third team. Casey was also nominated as a finalist for the Senior CLASS award in women’s soccer for overall excellence on and off the field.