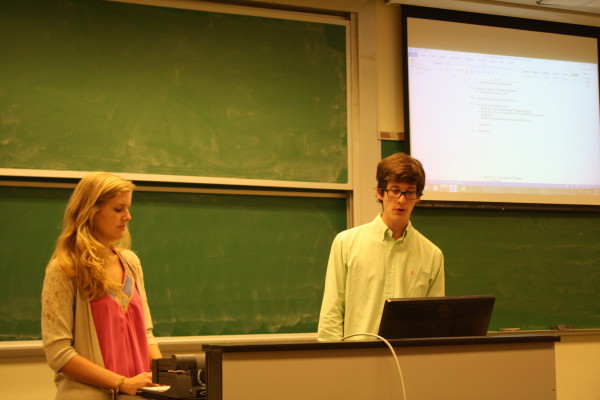 Yesowitz also introduced the Sustainability Resolution, which calls for the SA to pursue sustainable practices as an organization. The Resolution affirms that newly constructed and renovated buildings have two bottle filling stations, supports the installment of solar panels on the Student Recreation Center, advocates that every Residential hall has one recycling bin and one trash can per floor, encourages a mandatory “Meet the Greens” session, and supports the ability to recycle a wider array of materials.

“We are the Student Assembly, as a collective body and as representatives of the student body, we thought we should try setting the agenda for sustainability on this campus,” Sen. Sikander Zakriya ’19 said.  “So this is a resolution declaring our support for more sustainable things on campus.”

Chairman of the Senate Dan Ackerman ’16 introduced the Steer Clear Van Repair Act, which allocates $1,500 for the repair of the reverse gear in one of the two Steer Clear vans. The Office of Student Leadership Development will match the SA’s funding, for a total of $3,000 for van repairs. Due to the time sensitive nature of this bill, it was moved to old business and passed by unanimous consent.

The senate also heard updates from Class of 2017 President Katherine Ambrose on the Tribe Turkey Drive Act that occurred on Saturday, Nov. 21. According to Ambrose, 76 families of maintenance staff, as well as 11 additional families, received food from the drive.

“I got phone calls on Thanksgiving from some of the families saying ‘Thank you,’” Ambrose said. “They were so glad to be able to have the opportunity to interact with the College and to have the students be involved and feel support for them, so it was really, really great.”

Zakriya also updated the senate on the progress of the Senate Aide Program, and discussed the desire for more applications to the program. Applications for the program were released Nov. 19 and are due by Dec. 6.

At the end of the meeting, Sen. TJ Soroka ’17 announced his resignation from the senate due to an opportunity to study abroad next semester. Tuesday night’s meeting was his last senate meeting.

“It is with great regret that I have to announce that tonight is my last meeting,” Soroka said.  “An opportunity abroad next semester that I was not sure I would be able to partake in for many reasons when I was first running for semester has come up. It was a difficult decision to make. I have greatly enjoyed being part of Student Assembly and getting to serve as a representative for the class of 2017. My time on Student Assembly has heavily impacted me and my time here, I wish the best of luck to Student Assembly in the future.”

Before the meeting was formally adjourned, Ackerman encouraged the senators to keep up the pace of good work over the break and stated his approval with the progress of this semester.