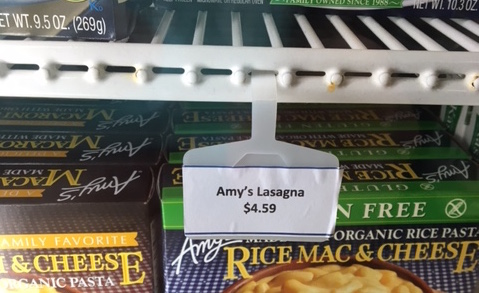 A student interested in purchasing Amy’s Lasagna, a frozen dinner offered at convenience stores around campus, can expect to pay over a dollar more for the product at the Tribe Market than at the Student Exchange.

Certain identical items provided at campus convenience stores vary in price from one store to the next. For example, Amy’s Macaroni and Cheese costs $3.99 at the Tribe Market, which is located in the lobby of the Commons Dining Hall, while the same item costs $4.59 at the Student Exchange, located on the ground floor of the Sadler Center. Amy’s Lasagna is priced at $5.99 at the Tribe Market and $4.59 at the Student Exchange.

The discrepancies in price are unusual because both the Tribe Market and the Student Exchange are self-operated locations and, as such, typically have standardized prices. This means that Dining Services manages the products and the prices at both of these stores, as well as at Zime, Boehly and Dodge Room. Because these stores’ goods are regulated by Dining Services, the prices across those stores tend to be the same. The discrepancies in the frozen dinners are an anomaly.

For this reason, the products found in the Earl Gregg Swem Library-based Aromas, though sometimes identical to the ones provided in campus convenience stores, cost differently. The items in Swem’s Aromas are priced by Aromas’s food supplier; the items in campus stores are priced by Century Distributors, the school’s supplier.

For the most part, the prices of goods in the campus convenience stores are the same. Products such as Kind Bars, Chex Mix, Oreos, ice cream, chips and various sodas are among the many items that cost students the same amount of Dining Dollars whether they are standing in the Tribe Market or the Student Exchange. The Amy’s frozen dinners are an exception. According to Resident District Manager Jeff McClure, these prices will soon be equalized.

During the last week of winter break, the College of William and Mary took on Century Distributors as its new food supplier. In the process of adopting this new supplier, Dining Services is evaluating the price of all items sold in the convenience stores to make sure they are equal to one another and competitive with local stores that are not affiliated with the College. This means that dining officials check the prices of items at nearby stores, such as Wawa, to determine the price of the goods that line the shelves of the Student Exchange. McClure stated that the prices should all be the consistent by next week.

McClure stated that he wanted to move to a new supplier because it offers a diverse “market basket,” or selection of goods. He said that Century Distributors provided more organic offerings than were available previously, in addition to increased dessert foods and smaller quantities of a given product. For example, students now have the option to purchase Ritz crackers by the single-sleeve, rather than by boxes that contain four sleeves of crackers.

“The new supplier is more advantageous because it offers more variety to students,” McClure said.

Throughout the semester, McClure stated that Dining Services will continue to expand the menu offered at the dining halls. Last semester, easels were set up in the Sadler Center, on which students could write suggestions for meals. McClure stated that all suggestions were subsequently incorporated onto the menu, which is made mostly from scratch. He said that similar easels will be set up this semester.

According to Campus Dietitian Julie Nance, another goal for Dining Services is to improve communication with students and options for healthy eating. Nance stated that 60 percent of the offerings in dining halls will be from what Dining Services calls the “Mindful Menu,” which includes healthy options.

“Good nutrition is important not only for your body, but for your brain,” Nance said. “We’re trying to make sure healthier options are available. That’s always where my mind goes, and my heart.”