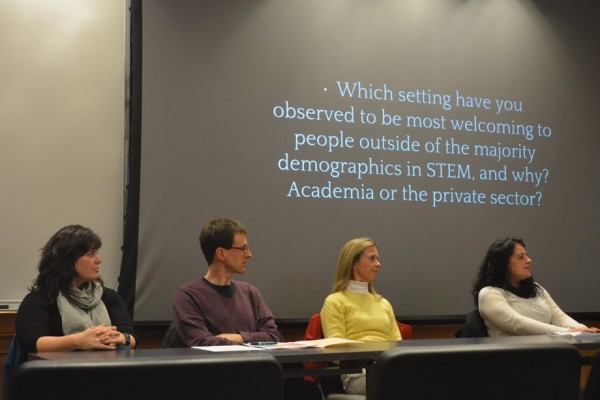 Professors from the College of William and Mary’s science, technology and mathematics departments gathered with students Feb. 25 to share their experiences with LGBTQIA issues in academia. The College’s oSTEM chapter, founded in October, and the Student Assembly Department of Diversity Initiatives organized the event.

oSTEM, or Out in Science, Technology, Engineering and Math, is a national organization dedicated to creating leadership and mentoring opportunities to LGBTQIA people in STEM fields. Since the chapter’s founding at the College, members have worked to educate students on diversity, particularly in the sciences.

Four professors from different science fields sat on the panel. While most of the questions were prepared by oSTEM members, other students had the chance to submit questions online prior to the panel. These questions focused on discrimination faced by queer and minority professors, as well as ways to make STEM fields more diverse and welcoming for professors and students. Another focus of the questions was how data-driven science fields incorporate elements of faculty and students’ personal lives enough to be inclusive.

I think the focus on the sciences being objective and data-driven makes us forget that even in the attempt to be objective there is a lot of subjectivity that comes into play. — Physics professor Wouter Deconinck said

“I think the focus on the sciences being objective and data-driven makes us forget that even in the attempt to be objective there is a lot of subjectivity that comes into play,” physics professor Wouter Deconinck said. “Having more discussion about, how even in objective disciplines, subjectivity plays a role in who gets published and who gets reviewed better in journals and who gets hired should happen to make people see that the human aspects have a really important role.”

Not all of the professors on the panel identified as queer; some solely spoke on discrimination and biases they had faced as women in both academic and private sector pursuits of the sciences. Biology professor Helen Murphy discussed why it is important for students and faculty to see people who are like them in the sciences. She compared the struggle to employ a more diverse faculty to the anger some people feel about the lack of people of color in this year’s Oscars nominations.

I have seen a lot of discrimination towards women. It happens all the time; we are human beings and we all have our flaws. Try[ing] to manage people’s pre-conceived notions about you is a skill that I’m still learning. It’s an ongoing battle. — Chemistry professor Kristen Wustholz

“When we think about diversity in an academic and scientific setting, it is very important,” Murphy said. “It gives humanity to people other than white people. You see stories, you can relate to people, and see the humanity in complicated characters. When I think about the sciences nowadays, it’s all collaborative. Diversity gives us a sense that everyone who worked together is smart and important.”

Each professor said that they have either witnessed or experienced discrimination at some point in their careers in academia.

“I have seen a lot of discrimination towards women,” chemistry professor Kristen Wustholz said. “It happens all the time; we are human beings and we all have our flaws. Try[ing] to manage people’s pre-conceived notions about you is a skill that I’m still learning. It’s an ongoing battle.”

Toward the end of the panel discussion, audience members had more opportunities to get involved. Professors asked students how they could be better at making all students, but especially those who are gender or sexual minorities, feel safe and included.

Some ideas from the audience included having professors ask all students at the beginning of a course about their preferred pronouns, reminding students that they were supported throughout the course of the semester, and including the contributions of minority scientists in classroom discussions.