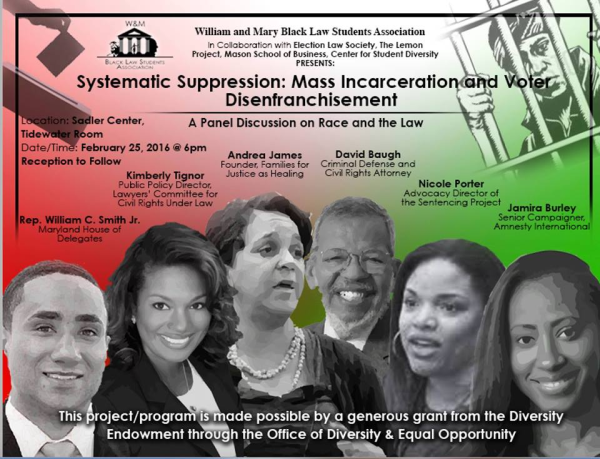 The College of William and Mary’s Black Law Students Association held the Annual Symposium on Race and the Law on Feb. 25. This year’s theme was Systematic Suppression: Mass Incarceration and Voter Disenfranchisement.

The symposium was also sponsored by the Election Law Society, Revive My Vote, the Center for Student Diversity, the Lemon Project and the Mason School of Business. This year, the symposium was also one of six projects that was granted an Innovative Diversity Effort Award. IDEA grants ranged from $500 to $1,500.

The two topics that were the focus of this symposium reflect racial discrepancies in the United States’ legal system.

“Each year the William and Mary BLSA chapter hosts a symposium that addresses contemporary legal, social, and political issues that affect the black or African-American communities,” Symposium Chair Brittany McGill J.D. ’17 said. “This year’s theme of systematic suppression focuses on the disparities existing in our society caused by facially neutral legal systems.”

Facially neutral legal systems are legal systems that are not inherently discriminatory in theory, but which may discriminate in practice. Criminal defense and civil rights attorney David Baugh focused on the way mass incarceration has been used as a strategy to keep more people in prison for longer sentences.

“This increase is not by mistake,” Baugh said. “The United States government crafted law to keep people in jail for long periods of time. Probably the biggest problem was that we destroyed lives, we took something that was not a serious drug and made it a serious drug, and I didn’t understand why.”

“Women happen to be the fastest growing incarcerated population,” James said. “One of the things we don’t ever think about is that many are the primary caretakers of their children prior to their incarcerations.”

According to Baugh, the war on drugs was a tool for disenfranchising black men.

Families for Justice as Healing Founder Andrea James added that one of the largest growing trends within mass incarceration is the rise of arrests of women, especially women of color, on conspiracy charges — charges that one person is in agreement with another to commit a crime. According to James, many of these charges are unfair as these women are given the same sentence as men who commit the crimes, regardless of any extenuating circumstances.

“Women happen to be the fastest growing incarcerated population,” James said. “One of the things we don’t ever think about is that many are the primary caretakers of their children prior to their incarcerations. The heartbreaks of the women that are there from being separated from their children, and the inaccurate portrayal that the people outside of the prison have of these women, really continues to help drive us to the point where women are the fastest growing incarcerated population.”

James served two years in federal prison, and in her time there met whole families who had been arrested as part of the war on drugs. According to her, this system has left young children, especially young girls, as some of the most vulnerable members of society.

“Elected officials have the power and the influence to shift the system away from punitiveness to something less punitive,” Porter said. “Prosecutors and other attorneys are in the position to control some of the discrepancies, and to use their agency to challenge this.”

While the majority of the panelists were attorneys or worked in the legal system, Sentencing Project Advocacy Director Nicole Porter also offered her political perspectives on the issues related to systematic suppression. Porter focused on the influence those holding political power have over the criminal justice system.

She then suggested ways that politicians could use their power to make a difference in combatting mass incarceration and ways that lawyers could work on eliminating discrepancies from their work.

“Elected officials have the power and the influence to shift the system away from punitiveness to something less punitive,” Porter said. “Prosecutors and other attorneys are in the position to control some of the discrepancies, and to use their agency to challenge this. The laws are so complicated, there is a lot of discretion in how you charge people. Prosecutors make a choice in how they choose to charge them based on their political beliefs. A lot of people have used their discretion to make real changes.”