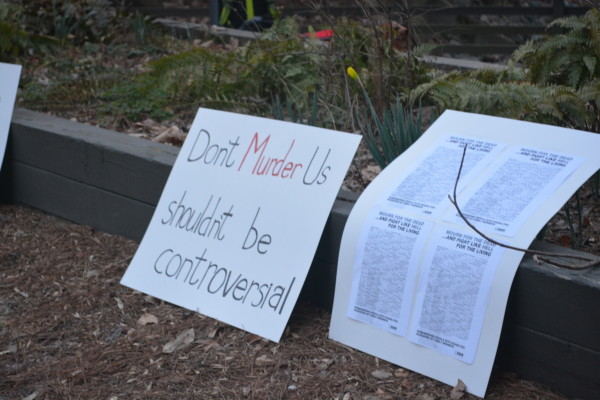 In the past five years, over 180 people with disabilities have been killed by their family members or caretakers. Media outlets and court systems have often referred to these as mercy killings rather than as murders. On Tuesday, March 1, students from the Neurodiversity Student Group and Corpus partnered to hold the Disability Day of Mourning, an event honoring those who have been killed.

The Neurodiversity Student Group works to provide advocacy and accommodations for neurodivergent students and to spread awareness and acceptance on campus. Neurodivergence is a term that encompasses people with brain differences, mental illnesses, developmental disabilities and any other conditions affecting the brain. Neurodivergence can include autism, synesthesia, dyslexia, Tourette’s and ADHD, among other brain differences. Corpus is another advocacy group that was designed to create positive change for people with disabilities.

The March 1 vigil was part of a national initiative spearheaded by the Autistic Self Advocacy Network, which helped coordinate vigils across the country.  Not Dead Yet, a grassroots disability rights group that opposes physician assisted suicide and euthanasia, also worked with ASAN to coordinate these events.

At the College of William and Mary’s vigil, speakers read the names, ages and times of death of those who were murdered. Interspersed in these readings were letters, poetry and prose written about the murders. President Barack Obama sent a letter in favor of this national initiative, sharing his support for the Disability Day of Mourning.

“It is our responsibility as Americans and as human beings to ensure all people have the chance to participate in society, live in safety, and make of life what they will,” Obama said in the letter. “As long as I am President, I will keep pushing to ensure that people with disabilities can lead lives free from prejudice, violence, and fear, and can know a world that does not recognize their lives as a tragedy, but that fosters their strengths and extraordinary potential.”

President of the Neurodiversity Student Group Haley Outlaw ’17 got the idea to hold a vigil at the College after attending the Autism Campus Inclusion Program. When she began to organize the event, she then received documents from ASAN as well as lists of names for the vigil.

It is our responsibility as Americans and as human beings to ensure all people have the chance to participate in society, live in safety, and make of life what they will. As long as I am President, I will keep pushing to ensure that people with disabilities can lead lives free from prejudice, violence, and fear, and can know a world that does not recognize their lives as a tragedy, but that fosters their strengths and extraordinary potential. — President Barack Obama

According to Outlaw, the most important part of the vigil was bringing attention to those who were murdered.

“First of all, I very much want to honor and remember the people who have died,” Outlaw said. “Our primary purpose is to remember them. We of course want to start the discussion and start positive change. Our priority is the people who have died. That said, we would love it if this event led to more discussion about the issues that people with disabilities face. In particular, those issues that are faced on a campus scale.”

According to ASAN, out of the 180 people with disabilities murdered in the last five years, 70 were murdered in the one year period since the last vigil. One, Tyler Trammel-Huston, a 9-year-old, was murdered on Jan. 3, 2016. Trammel-Huston, a boy with special needs, was left alone and mauled by his caretaker’s dogs. In December of 2015, 71-year-old Antonio Tucci was murdered by his nephew and in November of 2015 5-year-old Helious Griffith and 6-year-old Dustin Hick were murdered by their mothers.

These statistics are reflected at an international level and the responses of criminal justice systems have often been lax. For example, in the United Kingdom, a woman who murdered her three children with disabilities pled guilty to manslaughter, and was not charged with murder.

The priority of this vigil was to honor people with disabilities and those who were involved said they would like to see positive change enacted on campus.

“People are dying, the exact numbers are hard to tell because they can get written off as accidents,” John Michael McCormick ’18 said. “The message we want to send out is that you have to treat all murders the same. When a person with a disability is murdered, especially if it by their parents, it is not reported on the same way as if a more able bodied person was killed. That’s what we are trying to fight. We want to change the conversation so it’s focused on the victims.”