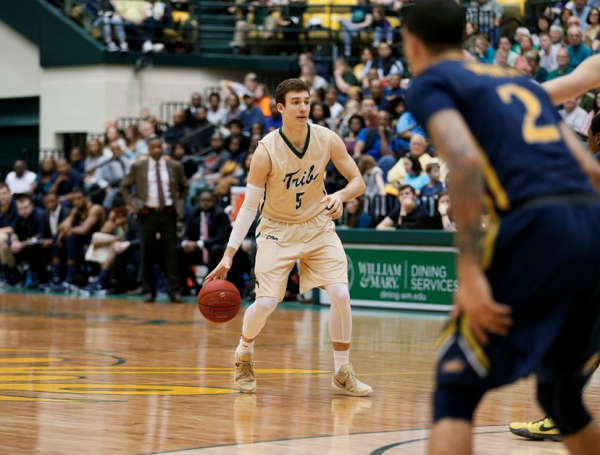 As I sat in Royal Farms Arena in Baltimore, just over a week ago, my heart dropped: I saw William and Mary fall to Hofstra in the Colonial Athletic Association semifinals. The late layup by the Pride, the missed three-pointer from the Tribe and the final free throws made the previous day’s 79-64 win over James Madison seem like a lifetime ago. The College’s season may be remembered as just another year of not going to the Big Dance, but 2015-16 was much more in reality.

Starting with the season opener, a win over Atlantic Coast Conference member North Carolina State, the Tribe appeared strong despite losing what head coach Tony Shaver has referred to multiple times as “arguably the best player in program history” in Marcus Thornton ’15. When all the storylines looked at how much was lost with Thornton’s graduation, the College fought to make a name other than his for itself, and I think it did.

The season as a whole, of course, saw lots of play from senior guard Terry Tarpey and senior forward Sean Sheldon. With the NCAA tournament, the NIT and other postseason event schedules released on Selection Sunday last weekend, it is clear that their collegiate careers are done. They refused to go quietly, with Tarpey getting his second-straight CAA Defensive Player of the Year honor after getting the program’s first award last season, and with Sheldon improving his play through the season, increasing his career-high scoring mark in several games.

For a mid-major conference ranked as high as No. 9 in all of Division I men’s basketball, the Tribe should give itself a pat on the back for another solid season.

It isn’t just about individual performances, however; it’s about the team. With the CAA quarterfinal victory, the Tribe secured its third straight year with 20 victories for the first time since 1951. The program is in good shape, and getting to the CAA semifinals is no joke, as most of the conference stayed neck-and-neck in the standings throughout the slate, with just Delaware and Drexel falling behind in the hunt for the regular season title in the 10-team conference. For a mid-major conference ranked as high as No. 9 in all of Division I men’s basketball, the Tribe should give itself a pat on the back for another solid season.

Of course, a pat on the back is not the goal of the program. The goal is a conference championship. The College fell short of that again this year after falling in the tournament final in 2014 and 2015, showing something missing from the gameplay. In the postgame conference after the semifinal on March 6, Shaver talked about how battling hard and execution both need to be present to win games, citing a lack of execution as a key factor in the loss. After watching the game myself, I agree, as sloppy play doomed the Tribe to another year without the CAA title and that automatic qualifier to the NCAA Tournament. The Tribe struggled mainly with keeping the ball once the team had possession as well as rebounding and simply taking good shots. Defensively, Shaver said after the Senior Day loss to Drexel last month that the team was playing without much heart. Some of that heart came back in the CAA quarterfinal but wasn’t enough against Hofstra.

Even with the loss of Tarpey and Sheldon, the future looks bright for the College.

As someone who has been here for three years and has one left, I hope to see the Tom Yeager Trophy brought back to Kaplan Arena next year. There are eight months until the 2016-17 season begins in October and likely high pressure to perform on the team. Even with the loss of Tarpey and Sheldon, the future looks bright for the College. I say this looking at the bench, with sophomore guard Greg Malinowski going off for a career-high 22 points in the CAA semifinal as well as sophomore guard Connor Burchfield coming back to life as the three-point specialist he is known as during the quarterfinal game the day before. Sophomore forward Jack Whitman has been putting up numbers similar to Sheldon’s through the season and appears to be a worthy and likely replacement for him on the starting five next season. With three starters returning next winter, including junior guard Daniel Dixon and forward Omar Prewitt as well as sophomore guard David Cohn, there is still a lot of talent on the team. Though Dixon battled a wrist injury for part of the season, he remains a strong offensive player near the basket and from range. Prewitt struggled with free throws late in the season but led the team in scoring significantly through most games. Cohn was near-perfect from the stripe in the last couple of games and showed high awareness, making key assists as well as creating his own shot opportunities. He had big shoes to fill, though, as he was assuming the role in the starting five that for the previous four seasons had been occupied by Thornton.

Despite once again not getting the CAA title, the season can’t be considered a failure. With the offseason underway, the College will surely be working on the problem areas from this year. The Tribe is in good hands, both with the players on the court as well as Shaver and his staff. It’s just a shame that we’ll have to wait another year to see if the trophy heads to Williamsburg after the 2017 CAA tournament.