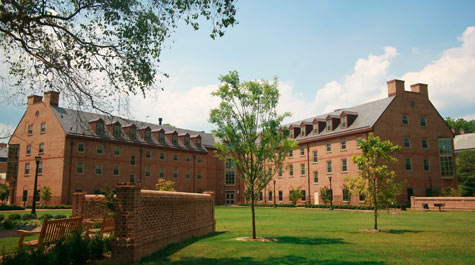 As part of the College of William and Mary’s immediate actions in response to the Task Force on Race and Race Relations’s findings, the Board of Visitors passed a resolution that calls for renaming of the Jamestown Complex Dormitories after two African Americans who contributed significantly to the College and its history with “deliberate speed.”

College President Taylor Reveley proposed these decisions in a campus-wide email earlier this week. Prior to the approval of this resolution, the dorms were referred to with placeholder titles, “Jamestown North” and “Jamestown South.”

During a BOV meeting the day before, Reveley said that in context of the College’s history with slavery, it was important to address issues regarding the racial climate on campus.

“Because of our history of slavery, secession during the Civil War and segregation after the Civil War, the most acute challenge we face concerns race and the experiences of African Americans on this campus,” Reveley said.

Because of our history of slavery, secession during the Civil War and segregation after the Civil War, the most acute challenge we face concerns race and the experiences of African Americans on this campus,” Reveley said.

The College previously recognized Hardy for her contributions in 2012 when they elected her an honorary alumna.

“For those of you who don’t know, particularly the decision was made, to rename one of our prominent buildings after Dean Hardy,” board member Kendrick Ashton ’98 said. “She was someone who was deeply revered and made a big difference on campus and she was here for people of color.”

Jamestown South will be named Lemon Hall in memory of an enslaved man owned by the College in the late eighteenth century. The College’s Lemon Project is also named after him. According to the resolution and a campus press statement, administration knows very little about his life.

Although little is known about Lemon, the Project’s website said he, in a way, represents the many narratives of enslaved people at the College.

“We cannot know the full dimensions of Lemon’s life or his relationship with the College,” the Lemon Project’s website said. “In many ways, Lemon stands in the place of the known and unknown African Americans who helped to build, maintain and move the College forward.”

We cannot know the full dimensions of Lemon’s life or his relationship with the College,” the Lemon Project’s website said.

After the BOV passed the resolution, they charged Reveley with making sure the changes would made in a timely fashion. Over the summer, the College will change signage on the two residence halls.

Chief Diversity Officer and Task Force Chair Chon Glover M.Ed. ’99 Ed.D. ’06 gave a presentation on the findings during a full board meeting Thursday, April 21 and spoke about the importance and difficulty in identifying and addressing racial issues on campus.

“This has been a very thoughtful and comprehensive process,” Glover said in a press statement. “The task force was an extraordinarily dedicated group of people and we had a really tough task. This is a work in progress and this is just the beginning.”