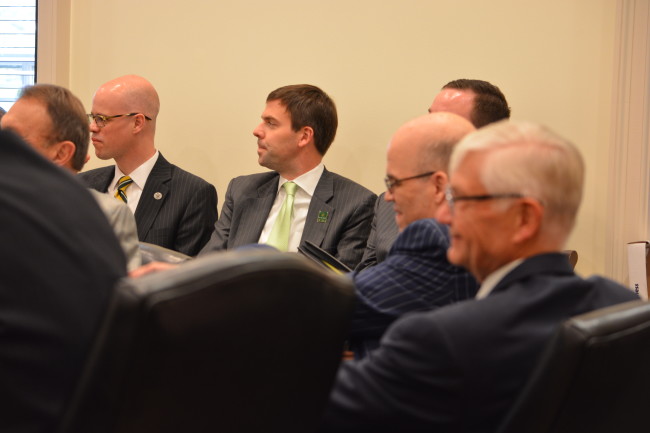 The Board of Visitors convened April 21 and dedicated time to the discussion about improving accessibility and supporting neurodiversity at the College of William and Mary.

During the board’s Student Affairs committee meeting, neurodiversity was a central topic and came as part of a larger campus conversation. Throughout this academic year, neurodiversity and accessibility have been brought to the attention of the public through panel discussions. Earlier in the spring, students gathered in solidarity at a vigil held on the Disability Day of Mourning.

Encouraging the development of self-advocacy skills for students with disabilities, enabling students to identify and engage strategies that can enhance academic success and increasing awareness of student accessibility services in the campus community were at the heart of the presentation.

According to Henderson, the students that gain to benefit from these services are those with both visible and “invisible” conditions. These conditions can be temporary or long-term conditions and those with and physical or mental health diagnoses.

“It’s not that when students are asking for accommodations, they are asking for something that is unfair,” Henderson said. “They’re asking for an even playing field that will allow them to … demonstrate the knowledge and all the things that they are able to accomplish in a way that is representative of who they are, not the disability that they may also have.”

In her presentation, Henderson broke down the rate at which students with different disability types use accessibility services. The largest percentage of these students have cognitive and neurobehavioral disabilities, at 44 percent, followed by chronic health issues at 23 percent, psychological or psychiatric issues at 17 percent, temporary health issues at 10 percent, mobility and visual issues each at two percent, and head trauma and hearing issues each at one percent.

“Orientation … is an exciting time for students to get on campus and learn more about their institution – it is also a stressful time for students who have chronic conditions and are trying to navigate campus with limited mobility concerns,” Henderson said.

The most frequently granted accommodations the department provides are extended time for testing, providing quiet test-taking environments, allowing excused absences, providing peer or professor notes for students who aren’t able to capture lectures and ensuring flexibility with assignment due dates.

“We certainly have more and more students who are successfully navigating the high school environment and are able to transition to college,” Henderson said. “We want to be competitive with the other schools out there, we want to get these great minds and these great people in, so it’s important that we’re able to continue to keep up with the pace and demands, that they’re aware of their rights and options, they know what services are offered here, and where they can get their needs met.”

Following Henderson’s report, student liaisons to the board Yussre El-Bardicy ‘16 and Ryan Goss ‘16 presented their perspective on the issue of accessibility. They stated that their aim was to challenge common assumptions about disability accessibility and to convey anecdotes about students’ experiences at the College.

They proceeded to outline several scenarios typical of daily life at the College that become complicated for students with disabilities, singling out the tradition of processing through the Sir Christopher Wren Building at Convocation, as it assumes a level of ability for incoming students that can make those with disabilities feel less welcome.

“When people ask me what my favorite William and Mary tradition is … I almost always mention Convocation,” El-Bardicy said. “It’s a really great feeling to be able to go through Wren and see the cheering faces of the community, but what I didn’t realize until these past few weeks is that Convocation assumes a level of accessibility for our incoming students, asking them to walk through a very inaccessible portion of the building.”

El-Bardicy and Goss said that an environment that is accessible is one that is barrier-free, one that allows for reasonable accommodations and that promotes inclusion, connection and access for everyone.

According to Goss, accessibility is plagued with misconceptions.

“When I first sort of dove in to this topic, I fell into what I think is a common assumption, to immediately associate accessibility with limited mobility,” Goss said. “While mobility considerations are very important, we do acknowledge the diverse array of experiences, from injuries to learning disabilities to permanent conditions.”

When I first sort of dove in to this topic, I fell into what I think is a common assumption, to immediately associate accessibility with limited mobility,” Goss said.

Goss cited improving navigation, especially in times of inclement weather, as a priority for improving accessibility, as the College’s brick paths are notoriously difficult to navigate. Goss and El-Bardicy both emphasized that while preserving the historical elements of the College is important, it can limit accessibility and send a signal to students with disabilities that this is not the place for them.

Furthermore, they lauded the work that student-led initiatives such as Corpus, the Student Veterans Working Group and the Golf Cart program have advanced in the campus community. The golf cart program specifically was emphasized as a success, providing 3,480 total rides since the inception of the program in fall 2015.

In her presentation, Wulf explained that neurodiversity is a concept that is gaining ground both nationally and internationally. She described the College’s Neurodiversity Initiative, founded in 2012, as forward-thinking, inclusive and student-centered.

“We are a community looking to support our students on campus and beyond,” Wulf said.

We are a community looking to support our students on campus and beyond,” Wulf said.

“We’re not just ready for them, we’re welcoming,” Wulf said. “They can be some of our brightest students, but no matter their talent, they are part of the Tribe. In short, this is a very William and Mary project.”