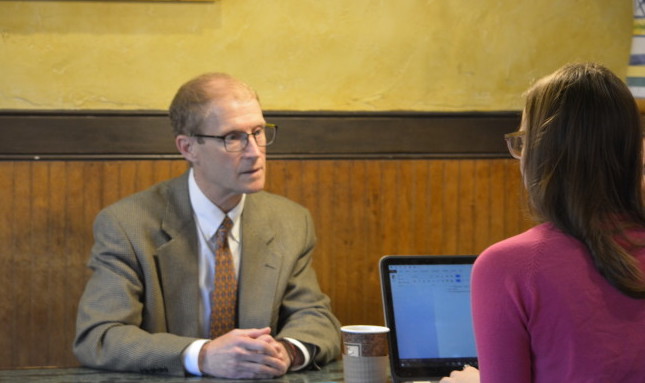 Walking into his advisor’s office during his freshman year, Paul Freiling ’83 was determined to become a doctor. But acting upon his advisor’s suggestion, Freiling dropped one of the science classes he had signed up for and took Greek and Roman mythology instead — a decision that would lead him to a Classical studies major, a life in Williamsburg and 12 years on City Council.

Now up for reelection after three terms as vice mayor, Freiling is the only incumbent on the ballot for the upcoming Williamsburg City Council election. With five candidates running and both Mayor Clyde Haulman and Council Member Judy Knudson stepping down, voters will have the opportunity vote for three candidates Tuesday.

Freiling said he would provide some continuity for the Council, outlining some of the same issues as previous campaigns: strengthening the tourist industry, attracting new businesses and working toward demographic balance. Although those big long-term visions for Williamsburg color his campaign, Freiling said he hopes to continue providing high-quality services for the community’s everyday needs.

At the College of William and Mary, Freiling embodied a true “TWAMP” — a Typical William and Mary Person — according to government professor John McGlennon, who taught Freiling in one of his courses.

After being appointed to the Commission and serving for five years, a City Council member unexpectedly resigned, and Freiling decided to put his name in the hat for the Council’s appointment. Although he was not chosen, Freiling promised to run in the next election, and was voted on to City Council in 2004.

To Freiling, local government is about managing the community — providing a forum to address and craft solutions to issues.

Freiling debated one particularly contentious issue as vice mayor: the “three person rule,” under which rental properties could legally house a maximum of three unrelated persons. With both student renters and landlords holding strong stakes in the outcome, Freiling ultimately came out in support of crafting an exception.

“We had to balance [the perspective of the landlords and the students]” Freiling said. “I just remember afterwards we were talking and I thought to myself — I’m just relieved that we made a decision. I’m not sure if it’s the right decision — we’ll find out until years down the road — but now that it’s six years later, it’s been fine.”

However, students and community members alike have recently expressed interest in revisiting the rule, including current student Benming Zhang ‘16, who also running for a seat on City Council. In response to questions on the issue in recent City Council debates, Freiling said he would be willing to take up the issue again.

When asked about their experiences working with Freiling, his City Council colleagues were quick to identify one of Freiling’s qualities — his inquisitiveness.

Council member Scott Foster ’10 J.D. ’14, who said his and Freiling’s interests overlap in revitalizing the downtown area and attracting new businesses, pointed to Freiling’s ability to ask hard questions on the various topics that come before the Council.

“Paul is very bright,” Foster said in an email. “He is highly analytical, thinks about issues in ways that are unique and is always open to new ideas. This shows at every council meeting, as Paul is always ready with multiple questions and perspectives on the issues of the day.”

Knudson agreed, noting Freiling’s ability to ask “penetrating questions” has led to better policies and decisions for the City.

When asked about this reputation, Freiling gave a simple explanation: he wants to make sure every voice in the community is heard.

One difficulty Freiling has encountered in his elections and time on City Council has been reaching out to students. He said it is difficult for him to knock on doors and hold events on campus like he can in the city.

“I guess I could sit in the Caf and talk to people that walk by, but I don’t know — I’m not sure that’s the kind of experience I want to be associated with,” Freiling said. “So, I’d ask the student population, if you want the city to be involved, invite us, ask us, have us come to events. We can’t come to every event, we have limited time too … but we’ll make the effort, we’ll try to come to things, we want to do that.”

Although he may have a hard time accessing campus, among the students who do know him, Freiling is well-liked.

Jessica Armstrong ’17, who is in a local running group with Freiling, supports his reelection, focusing on his experience in local government and investment in the Williamsburg community.

Speaking to these concerns, Knudson said Freiling has continually demonstrated an ability to navigate potential conflict of interests.

“It’s no bigger of an issue than if someone at the College being on City Council because both Williamsburg and the College are both such important parts of the city,” Knudson said. “And I personally think it’s important to have people in the largest entities in the city involved in the City Council.”

Because Haulman is stepping down, Freiling seems to be the natural successor to that position to many. In response to these speculations, Knudson, who will also retire after the current term, said she believed Freiling would serve the city well as mayor.

“[Freiling has] been Vice Mayor for a number of years and he’s done a really nice job, and I’d like to see him continue and move up,” Knudson said. “The trouble is that it’s a lot of time and it’s a lot of work and he does have a full time job, a family and all those kinds of things, but I think he would do a really good job.”

Knudson’s loyalties lie firmly with Freiling. She said she will not be supporting or opposing any other candidates for the upcoming City Council election.

When asked about the possibility of becoming mayor, Freiling deferred to the immediate future, saying he is currently focused on reelection.

If successfully re-elected May 3, Freiling will then come together with the other four members of City Council July 1 and together elect the next Mayor. Although now concentrated on keeping his seat on Council, Freiling said if elected, he would be ready to serve the community in that role.

“If people think I can help [as mayor], I’d be happy to do it,” Freiling said. “It does take more time, which you know, I don’t say lightly.”