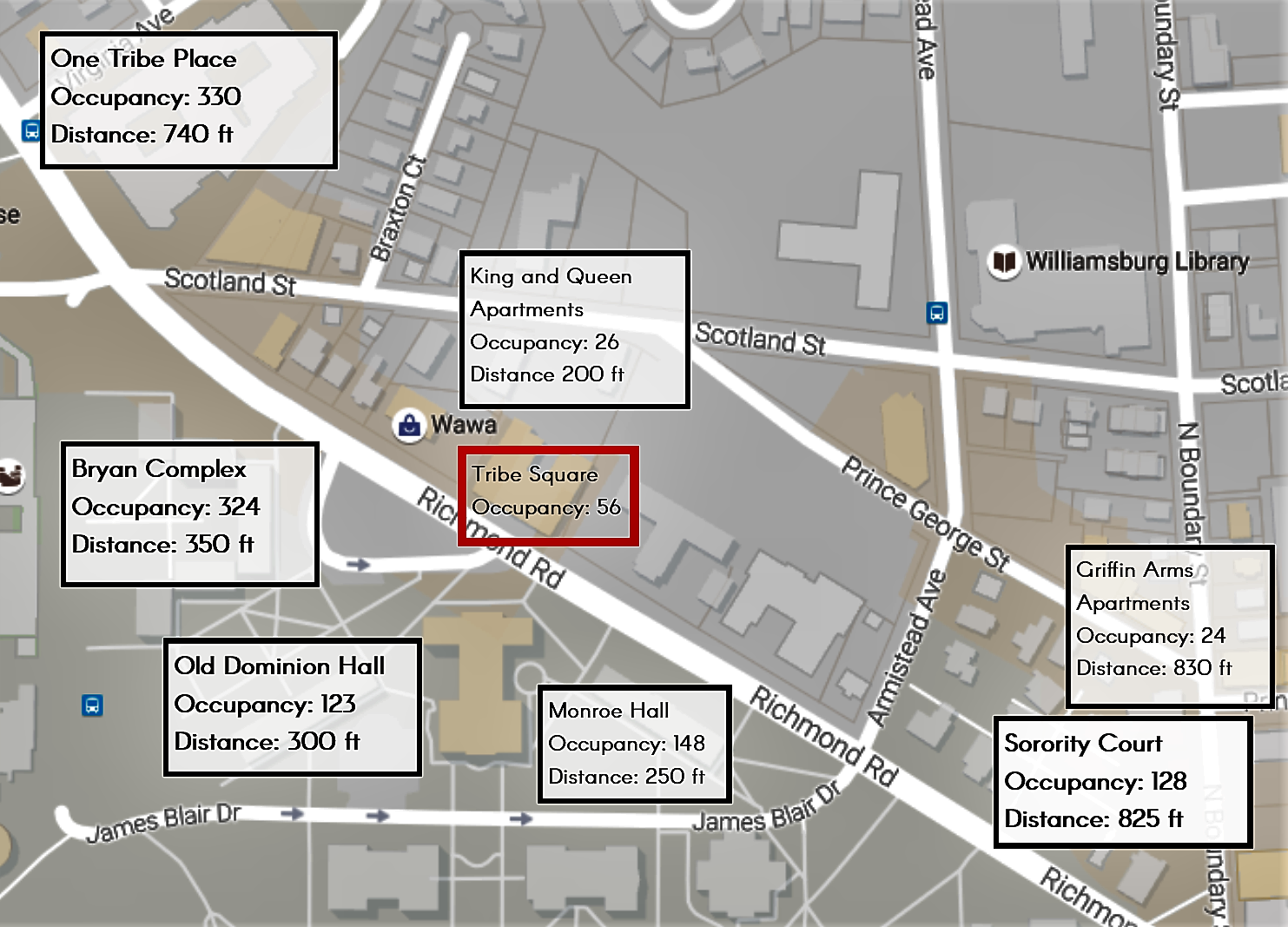 It was 1:00 a.m. when Cece Hess ’18 was awakened by police sirens as they sped past the Delta Gamma Sorority House on Richmond Road. She initially assumed that a freshman in Monroe Hall needed medical attention or that a fraternity party was being broken up. It wasn’t until an hour later that she received a text from a friend alerting her that a shooting had taken place outside The Crust, a local pizzeria and bar located in Tribe Square. The next morning her parents called to check on her and express their relief that the shooting hadn’t taken place on campus.

“[The email] made it sound like [Tribe Square] wasn’t centrally located on campus,” said Hess. “That’s crazy because now my parents thought it was far off, but really it was right there.”

In fact, over 1,160 students live within 1000 feet of where the shooting occurred. On-campus residence halls in the area include the Bryan Complex, Sorority Court, Old Dominion Hall, Monroe Hall and Tribe Square, an upperclassmen apartment complex which is situated directly above The Crust.

In addition to the residents in the area, students spent the evening in local bars and making late-night trips to Wawa. Tribe Square resident Rukmini Bhugra ’17 was in Paul’s Deli with friends when she received a text from a friend who was in the vicinity when the shooting occurred.

Bhugra said she immediately called her friend to get more information.

“He said someone fired into the air and I started getting very flustered,” Bhugra said. “Meanwhile, no one in the bar seemed perturbed at all. No one seemed to have known about this.”

Bhugra said that it took about 30 minutes for people in the bar to learn about the incident and that students learned about the shooting by word of mouth and social media. When she saw police cars outside, she knew that an incident had indeed occurred.

Across campus, students checked on their loved ones. Sorority members sent warnings to group messages, Orientation Aides made sure their freshmen were home safely and friends woke their roommates to tell them what had transpired.

Hannah Major ’19 was passing through the area with friends when she witnessed events unfold. Around 12:45 a.m. they were on their way to the Bryan Complex when they saw a crowd of people shouting outside The Crust. That’s when they heard gunshots.

“There were multiple [gunshots]. I think there were about five of them,” Major said. “People started running across the street without even looking at the cars. We shouted at them asking what was going on and they said there were gunshots and that we had to get inside.”

Michael Mejia ’17 was also walking past The Crust with friends and said he recalls hearing arguing and profanity before The Crust’s security guards began to break up the crowd.

Dominique Rowinski ’17, who was with Mejia at the time, said that the shooting happened next to The Crust’s patio.

“We started running,” Rowinski said. “We weren’t sure what was happening.”

“I went towards the church that was nearby,” Mejia said. “I was trying to get as many people [as possible] to leave but they didn’t really believe me. No one would listen because no announcement had been made.” Bhugra said she remembers receiving little information in the hour following the shooting.

“One of my friends went and talked to a cop to ask what had happened and was given a vague answer,” Bhugra said. “Very little information was given and the ripples of information were very slow.”

Major and her friends ran into the Bryan Complex where she could see police vehicles from her friend’s dorm room, but said that she was afraid to leave because she didn’t know the extent of the emergency.

I had no idea what was going on. I just assumed it was a fight but people’s minds go to the worst case scenario,” Major said.

“I had no idea what was going on. I just assumed it was a fight but people’s minds go to the worst case scenario,” Major said.  “I just knew that I didn’t want to be anywhere near [the shooting].”

Major got in touch with her friends to notify them of the situation. For some of them, this was the first they’d heard of the shooting. She waited until she received William and Mary’s Emergency Alert System before going home around 2 a.m.

“Even when I did walk home, I was on the phone with [my friend] the whole time,” Major said. We were watching it together and wanted to keep in contact and make sure that everything was fine.”