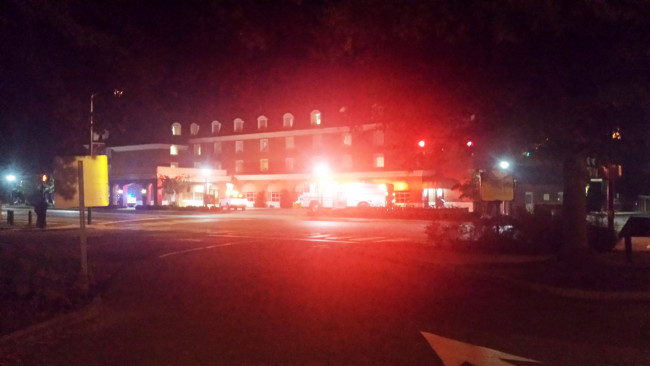 The fire alarm at One Tribe Place went off four times Oct. 16, three of which the Williamsburg Police Department said were the result of malicious intent.

According to the Williamsburg Fire Department, residents were forced to evacuate the building at 3:36 a.m. after the alarm was triggered by the discharge of a fire extinguisher.

Just over two hours later, at 5:47 a.m., fire crews were called to the building again when the alarm was activated.

The two later fire alarms, at 5:52 p.m. and 11:23 p.m. respectively, were triggered by a student smoking inside their room and another activated alarm.

One Tribe Place Area Director Richard Schofield, along with residents, evacuated the building following the 3:36 a.m. fire alarm, which went off when someone discharged a fire extinguisher in the fourth floor lounge and elevator.

“When a fire alarm goes off, especially in the middle of the night, you have no idea what set off that alarm,” Schofield said. “My first thought is always [to] get out of the building.”

Schofield later learned from a member of the Williamsburg Fire Department that somebody might have purple residue on their hands from using the fire extinguisher. He coordinated with officers from the WMPD to check students’ hands for residue as they re-entered the building.

Consequences for maliciously pulling fire alarms extend beyond the College.

Williamsburg Police Department Major Greg Riley confirmed that there is a code for falsely summoning the police and fire departments that would be handled by the WMPD, as One Tribe Place falls within its jurisdiction. Riley said that if caught, a student could be arrested for this offense.

“If somebody continues to maliciously pull alarms, or they tamper with an alarm system or extinguishers, we can actually charge individuals for reimbursement for the department and the man-hours,” Dent said.

Dent said that while the charge depends on the number of crew members and apparatuses sent to the scene, fines are approximately $300 per incident.

Carmi Thompson ’17, who lives on the fourth floor of One Tribe Place, recalled seeing smoke coming out of the kitchen when she evacuated during the first alarm and said she was struck by the seriousness of the situation.

Schofield claims that there was no smoke coming from the area and that what Thompson saw was likely the residue from the chemical fire extinguisher.

“It hangs very much like smoke in the air, which is actually what set off the fire alarm,” Schofield said.

As the day went on, Schofield and the Residence Life staff in One Tribe Place continued to work with the WMPD as each alarm went off, at one point walking through the building with officers to talk to students who may have witnessed any suspicious behavior.

In an email he sent at 12:17 a.m. Oct. 17, Schofield informed students that the fire alarms were discharged by students.

“If a lot of you are like me, you are tired and do not want to ever hear the fire alarm again,” Schofield wrote in his Oct. 17 email. “We could use your help by keeping an eye out for anything suspicious or if you see anyone tampering with extinguishers or pull stations please let us know so we can find anyone behind these things and hopefully prevent them from happening in the future.”

Lieutenant Don Butler of the WMPD declined a request for comment, as the WMPD is actively investigating the incidents.

According to College spokesperson Erin Zagursky, the false fire alarms have the potential to become a campus disciplinary matter following the WMPD investigation.

“Fire alarms are an important tool in communicating emergencies,” Zagursky said in an email. “Setting them off as a prank can affect how students view the validity of alarms and also puts unnecessary strain on police and other first responders, who must treat each report as a true emergency. While some may see setting off a fire alarm as a harmless prank, there are real consequences.”

According to Dent, the Williamsburg Fire Department automatically dispatches a fire engine and a battalion chief to the scene of a fire alarm each time one is set off. There are three people in each fire engine and one person, who serves as the incident commander, in the battalion vehicle.

This means that during the false fire alarms, there were at least four members of the Fire Department who were unable to go on other calls, possibly endangering members of the community or other students at the College.

Thompson said that she hopes that the Oct. 16 fire alarms will be isolated incidents and hopes the perpetrators know how harmful their actions were.

“It’s so rare to get a full night of sleep at William and Mary,” Thompson said. “It’s kind of frustrating that someone would do that, especially in what is considered an upperclassman dorm. It’s also a waste of our community’s resources. It invalidates a lot of actual problems.”