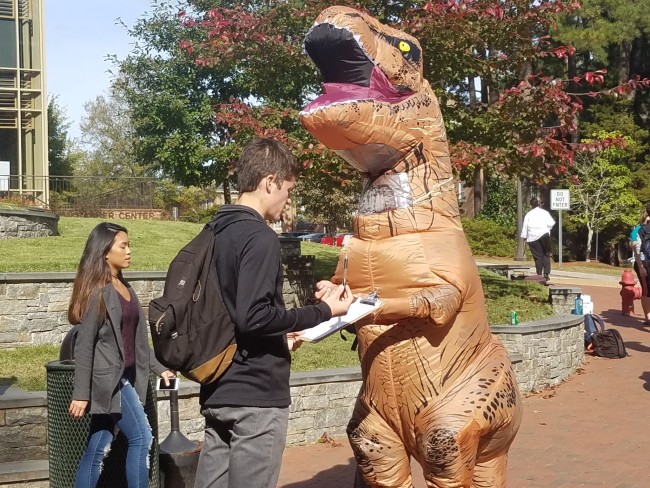 Shortly after Former Secretary of State Hillary Clinton became the Democratic nominee for United States President, the College of William and Mary’s Young Democrats endorsed her. When Donald Trump became the Republican Nominee, however, the College Republicans followed many from the national party and did not endorse him. Some hesitate to use his name.

“The Republican candidate is a little bit off-putting, to put it mildly,” President of the College Republicans Phoebe Brannock ‘18 said. “We really don’t endorse candidates, especially for national elections, because there are so many viewpoints in our club and we just want to give everyone the opportunity to speak their mind and learn about what other conservatives think.”

In 2012, The Flat Hat reported that some members of the College Republicans campaigned for Mitt Romney.

According to President of the Young Democrats Kathleen Bryant ’18, the club saw an early split similar to what the Democratic Party saw at the national level, with two independent clubs forming for supporters of Senator Bernie Sanders and Clinton. However, Bryant said that she felt that in college, the split was caused more by peoples’ different theories of change, not divisive issues.

I honestly think that at the end of the day, everyone cares about the same issues,” Bryant said.

“I honestly think that at the end of the day, everyone cares about the same issues,” Bryant said. “I was a founding member of Students for Hillary, but income inequality and poverty are my top priority issues. I think this speaks to a divide in peoples’ different theories of change. Some people believed passionately in Sanders’ theory of change, which was rebuilding institutions and changing the way that our government runs, but Hillary’s approach was working through the systems that we have to make them better. There’s not a right or wrong answer to that. It’s what your theory of change is.”

Because Brannock and the College Republicans will not be endorsing a candidate for the presidential race, the traditional debate between the campus political organizations will be one solely focusing on platforms and policies, not on candidates.

After this election, Bryant said she feels like the Democratic Party will mirror some of the sentiments expressed by Democrats on college campuses.

Specifically, Bryant said she believes that the progressive issues raised by Sanders’ campaign will be reflected in more progressive candidates in the next presidential races.

“In general, the type of campaign that Bernie Sanders delivered during the primaries is one that a lot of young people, even people who supported Hillary, recognized as the future of the party — approaching fundraising from a grassroots angle, young people in general, regardless of whether they supported Bernie or Hillary, really resonated with people across the club,” Bryant said. “I think we are all hopeful that the Democratic Party continues in that direction. I think it will, whether or not it does remains to be seen. It’s something that we all can agree on as young people, this trend leftward and this increasing empowerment of the progressive wing of the party.”

Estes also said that he does not believe that Johnson ever anticipated winning this election, but aims to get the Libertarian Party permanently on the ballot.

“Regardless of what Gary Johnson says, I don’t think he anticipates, or at any point anticipated, to win outright,” Estes said. “If he gets five percent of the popular vote, Libertarians in the future are on the ballot automatically in all 50 states. That’s actually a huge leg up, because a substantial portion of Gary’s fundraising in the early part of his campaign and a lot of his ground/grassroots work was all about getting on the ballots.”

While the Socialist Party of the United States nominated Mimi Soltysik and Angela Nicole Walker for president and vice president, the College Socialists will not be endorsing the pair.

“I’m going to be voting for Jill Stein because the Green Party has recently adopted a platform that makes it the largest anti-capitalist party in the United States, so I feel obligated to support them on that issue,” Villarreal said.

Villarreal also said that he has a distaste for the mainstream candidates and feels saddened by this election.

We are forced to choose between these two terrible candidates,” Villarreal said.

“We are forced to choose between these two terrible candidates,” Villarreal said. “One of them is almost certainly going to be president. There’s a lot of people who I know who won’t feel represented personally by either of them.”

Bryant said, looking to Election Day, she thinks it is most important that students don’t separate political and personal issues and understand the impact of certain social issues when they are voting.

“The biggest thing for me is that people will separate political and personal issues,” Bryant said. “I think that especially in this election, even at the state level, the political is personal. The types of decisions being made in City Council and in the White House have tangible effects on peoples’ lives. They’re not abstract intellectual concepts, they’re real things that have personal impacts on peoples’ lives. Because the things people are fighting for are things that very strongly affect peoples’ lives. That’s why I love politics and encourage others to get involved.”