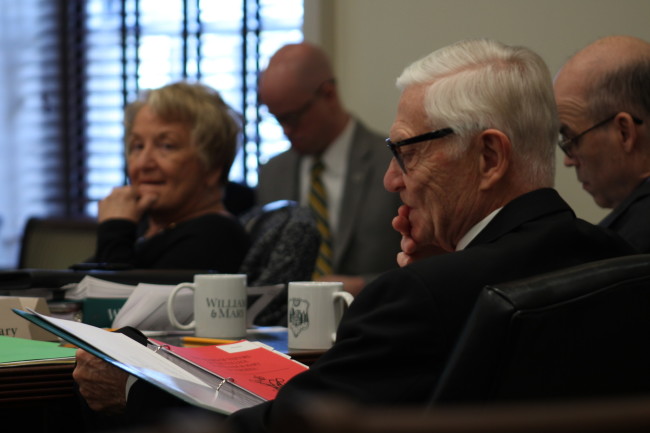 Less than a year after members of the College of William and Mary’s Board of Visitors was presented with the prioritized recommendations from the President’s Task Force on Race and Race Relations, seven out of those 10 recommendations are in some stage of being completed.

These prioritized recommendations and other aspects of diversity — particularly in the wake of United States President Donald Trump’s executive order on immigration — held the attention of the Board.

To me diversity, broadly defined, and inclusivity are core values at William and Mary,” Rector of the Board Todd Stottlemyer ’85 said.

“To me diversity, broadly defined, and inclusivity are core values at William and Mary,” Rector of the Board Todd Stottlemyer ’85 said. “And this must be an institutional commitment, in which all of us, students, faculty, staff, the Board, administrators play a critical role in modeling inclusivity and civility in our words and in our actions. … This is a process of progress; this is a journey that’s never finished.”

Chief Diversity Officer Chon Glover M.Ed. ’99, Ed.D. ’06 updated the Board on the 10 prioritized recommendations and others that made up the 51 total recommendations from last April’s Task Force report.

Glover cited Provost Michael Halleran’s hiring initiative, which was included in the report, as something the College had been working on. One of the Task Force on Race and Race Relations’ specific subcommittees is focused on the recruitment and retention of diverse faculty.

Additionally, Glover said that she estimated that 250 people had attended the dedication of Lemon and Hardy Halls.

“It was probably one of the most significant days in history, I think,” Glover said.

Other updates to the Board include updates on the financial status of the diversity initiatives. According to Glover, the College received a $1 million gift to the Raymond A. Mason School of Business from EY, formerly Ernst & Young. Glover said that she is still unsure as to what they will do with this money and what “diversity initiatives” entail in this situation.

Following reports last spring that black staff reported unfavorable treatment and working conditions — something that was also addressed in the report — a Facilities Management focus group was created after the College hired an LLC to conduct the evaluation as an outside group.

“This report is for them [black staff] to see that they are part of this community also,” Glover said.

Moving forward, the College will be doing additional training for managers and supervisors of facilities maintenance staff as while as reviewing current policies.

Issues of diversity relating to the Task Force on Race and Race Relations were not the only ones discussed by the Board.

Center for Student Diversity Director and Senior Associate Dean of Students Vernon Hurte said that his personal goal before leaving the College is to focus on supporting students by creating a sense of belonging, as well as creating a dialogue for students centered on diversity and inclusion.

Two other issues of diversity that Board members focused on included diversity in Greek life and the needs of Muslim students on campus.

Student Assembly representatives to the Board J.C. LaRiviere ’17 and Rachel Smith ’17 presented on the Greeks for Respect, Inclusion and Diversity (GRID) program and multicultural Greek organizations such as Hermandad de Sigma Iota Alpha and Delta Phi Omega. Additionally, Smith and LaRiviere told members of the Board that Muslim students on campus were looking for a place to pray, or potentially a room for people of all faiths to pray.

Later on in the week, College President Taylor Reveley said that he acknowledged that this was a priority for Muslim students and that the College would be working to find a location for another prayer location.

Member of the Board Lisa Roday said while she is pleased with the progress the Board and the different Task Force subcommittees had made in the last few months, diversity is not a short-term issue.

This is not the topic du jour,” Roday said. “This is something we’ll never be finished with, and we’ll never move quickly enough to please everyone.”

“This is not the topic du jour,” Roday said. “This is something we’ll never be finished with, and we’ll never move quickly enough to please everyone.”