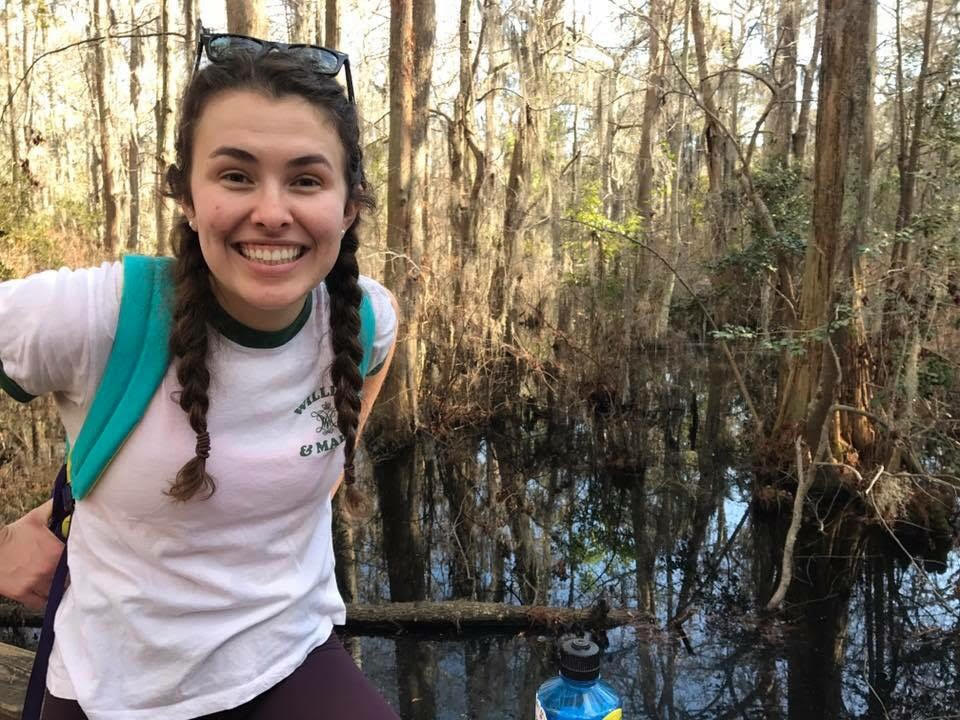 To her friends, Shannon Caietti ’17 is “ShanBot”: part injury-prone human, part robot. Caietti, who at the moment makes her way around campus aided by a pair of crutches, laughed to herself as she described her latest malady.

“I literally tripped on a brick,” Caietti said. “So I’ve got the most William and Mary injury in the world.”

When Caietti left the sunshine and sand of her hometown of San Diego for the loose brick paths of Williamsburg to study at the College of William and Mary, it was a passion for government that guided her.

Caietti credits her parents — especially her mother, a juvenile delinquency judge in San Diego — with sparking her interest in studying law.

“She’s just an amazing woman and I look up to her in so many ways,” Caietti said.

While still in high school, Caietti had the chance to see the legal process up close by shadowing judges and working in the Sex Crimes and Human Trafficking Division of the San Diego District Attorney office.

Caietti said that while she once aspired to someday run for office, after realizing how much time elected officials spend in fundraising efforts, she redirected her career aspirations towards where she could do the most meaningful work.

After finding that out I was like, ‘I can’t do that’,” Caietti said. “The system needs to change before I would want to dive into it. But maybe I do need to dive into it to change it, but that’s a whole other thing. But taking classes in college I’ve realized I really think I want to do criminal defense work and do public defending. That would be the dream, and that’s what attracts me to government.”

“After finding that out I was like, ‘I can’t do that’,” Caietti said. “The system needs to change before I would want to dive into it. But maybe I do need to dive into it to change it, but that’s a whole other thing. But taking classes in college I’ve realized I really think I want to do criminal defense work and do public defending. That would be the dream, and that’s what attracts me to government.”

Caietti said she has enjoyed taking classes across departments at the College, where she is also minoring in psychology, and said some of her favorite classes have been in the Judaic studies department. However, Caietti said that it is with the government department, and with one professor in particular, that she has grown the most.

“My most meaningful academic experience easily has to be with Jackson Sasser in the government department,” Caietti said.

Caietti is now in her third class with professor Sasser at the College — she took his Civil Rights and Civil Liberties class, then American Legal Process and is currently in his Death is Different senior seminar. According to Caietti, Sasser acts as a pseudo-parent to her.

“That’s not only special to have when my family’s pretty far away, but also to have in a faculty member,” Caietti said. “Someone who sees maybe more in you than you do in yourself. That’s been a huge really personally rewarding but also academically rewarding experience.”

But it is her involvements outside the classroom — particularly as a tour guide, as an Orientation Aide and as a member of the Undergraduate Honor Council — that Caietti credits with having brought her the most personal growth and fulfillment.

“They have to do with not only creating community for students but also upholding community values,” Caietti said.

Coming from a high school where she said cheating was pretty much the norm, Caietti said she found the community values embodied by the College’s honor code to be especially meaningful.

“We have a really unique and wonderful system and it’s great that we have students who run it,” Caietti said. “I’ve been on it for three years and I’ve seen the different tone in leadership my first term, my second term and then the third term when I was on our exec board. I’ve really tried to make an effort this past term to really enforce kind of a rehabilitative approach and educational approach to sanctioning when we do get cases of students who choose to violate the Honor Code.”

Bound by the Family Educational Rights and Privacy Act, members of the Honor Council are not allowed to discuss cases openly, but Caietti said she has found her work with the council to be especially rewarding for that same reason.

“I get to make a difference but I don’t necessarily get the chance to talk about it,” Caietti said.

Yet, Caietti said that cases involving peers can be emotionally draining, especially when they involve suspensions or expulsions.

“I know I’ve left those cases before and questioned, ‘Why am I the one making the decision?’” Caietti said. “Who am I to be making this decision? I’ve made mistakes in my life too.’ But then you have to remind yourself of the value of a peer-to-peer system and that you were elected to do a job, but it doesn’t make it any easier. That’s why we try to create a family within the council and I’ve met some of my closest friends through the organization.”

Caietti’s work as an admissions tour guide and as an Orientation Aide have also shaped her college experience through the communities she has helped build in those roles. This past year, Caietti served as Orientation Area Director for Brown Hall and Monroe Hall. She first became an OA her sophomore year, and said she found that experience to be formative, especially given the opportunity to be a role model and leader for new female students.

“Feminism has been a huge part of my life and I think where I found I can best serve a role is by trying to break down and educate fellow women that it is usually women that are perpetuating sexism as well, in terms of ‘Women are hardest on their fellow women,’” Caietti said. “And so being in a role in which I could welcome a hall of wonderful girls and women to William and Mary, and be able to empower them to make William and Mary their own community, and show them that I’m here to celebrate them and not criticize them or be petty and all of that jazz was really awesome. I loved being in that role.”

As a tour guide, Caietti has had her fair share of memorable interactions. For instance, Caietti recalls having to deal with an especially zealous dad trying a little bit too hard to be cool by grilling her on campus nightlife, and one time she said she accidentally spit sweat on someone while giving a tour during the sweltering Williamsburg summer.

Her freshman year, encouraged in part by her own OAs, Caietti also joined a social sorority, Kappa Delta. However, she said that being a part of Greek life has not been an exclusively positive experience.

“I got involved in Greek life because I went to an all-girls school and so what I really enjoyed was the fact that I think people have a lot of preconceived notions about what an all-girls school entails and they think everyone’s catty and b—chy when it’s the exact opposite,” Caietti said.

When she first joined Kappa Delta, she said she liked that its focus was on empowering women — she missed having a supportive community of women from her time at an all-girls school.

“That’s something that’s been pretty integral to my whole upbringing and experience from my mom to my high school to everything in between,” Caietti said.

However, she said that she has at times felt that the Greek community can be problematic in that it does not do enough to prevent issues like sexual assault and perpetuates sexist traditions like homecoming courting. While Caietti contemplated deactivating, she decided to stay in Kappa Delta because of the close community she had fostered there, but at the same time tried to stimulate conversations within the Greek community about these issues as much as possible.

“What I have tried to do is, again, educate other women about what they’re doing to other women, within the Greek system, within my own chapter, with individual interactions and kind of leading by example, in a way, of how I treat other people, not only in Greek life but with women in general and also having conversations with fraternity men,” Caietti said.

Once Caietti makes her cap-and-gown walk across campus to collect her diploma in May — hopefully without the crutches — she hopes to take a couple years off before eventually pursuing a career in public service.

I don’t want to lose sight of what I want to do, and once I start making money it’s going to be easy to want to get comfortable,” Caietti said. “But I really do want to go to law school and be a public defender.”

“I don’t want to lose sight of what I want to do, and once I start making money it’s going to be easy to want to get comfortable,” Caietti said. “But I really do want to go to law school and be a public defender.”

To get away from the intensity of campus, Caietti said she likes to go to what she describes as one of her favorite spots in Williamsburg. Just past Henry Street there is a bench where, on a nice day, she likes to lie by the sheep, look up at the sky and think.

“I’ve had my worst moments and my best moments at William and Mary,” Caietti said. “And I really appreciate that, because it has made me who I am today.”