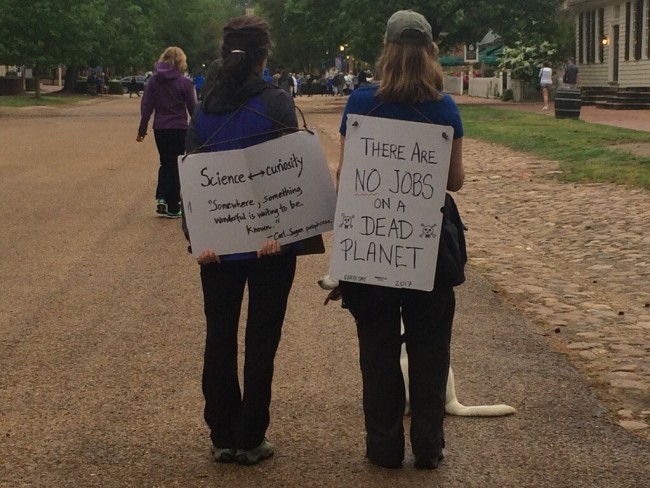 Saturday, April 22, student activists, College of William and Mary faculty and community members took to Duke of Gloucester Street to support science and to protest U.S. President Donald Trump’s cuts to the Environmental Protection Agency and threats to withdraw from the Paris Agreement.

Catherine Carey, a resident of Williamsburg, organized the event in conjunction with Democracy First, a local progressive organization of which she is a member.

“We’re all here today because science is so important in our lives,” Carey said. “I mean, it keeps us healthy, it keeps our environment clean and I think everyone here is disappointed that the administration hasn’t recognized the importance of science. We want fact-based policies to support our children and our communities.”

The DoG Street protest was one of approximately 600 taking place Saturday worldwide alongside the March for Science in Washington, D.C. The March for Science emphasizes “the very real role that science plays in each of our lives and the need to respect and encourage research that gives us insight into the world,” according to its website.

According to Carey, approximately 60 people were expected to participate in the local protest. Because Democracy First did not have a permit, protesters were restricted to units of 15 individuals.

Waverly Garner ’17 said he believed that the protests signify the resolve of the scientific community and its supporters to come together and “speak their minds.”

If you don’t communicate with somebody, with anybody, you’re never going to be able to have a conversation,” Garner said.

“If you don’t communicate with somebody, with anybody, you’re never going to be able to have a conversation,” Garner said. “That’s how people learn things — from each other. I actually think that’s a dialogue that really needs to happen. We need to be more vocal and listen but also speak and make sure it is a conversation and not just a one-sided attack on either side.”

Carey said that one of the DoG Street protest’s main concerns was the proposed budget cuts the Trump administration would make to the EPA and the National Institutes of Health, which face cuts up to $2.6 billion and $5.8 billion, respectively.

Some protesters said they were worried how Trump’s budget cuts would affect the region. Lonnie Mattis, a resident of Williamsburg, walked alongside her mother, Barbara Wilson of St. Augustine, Fla., out of concern for the impact that the new president’s policies would have on the Chesapeake Bay, which she said is just starting to improve.

“If [the Bay] starts going back downhill, everything, from the fisheries to the recreation to hotel industries, the economic impact will be horrible to say nothing of the animal life, the fish life, birds, the marsh grasses,” Mattis said. “It could sink so fast again.”

Stephen Gurley ’17 feared the impact the budget cuts could have on the career prospects and production of scientists because scientists take time to produce.

“If you do something now, that’s going to have a domino effect for the next 10 years in the production of scientists,” Gurley said.

Gurley, a biology major who will attend medical school next year while pursuing a master’s degree in public health, noted that he was especially concerned with the cuts facing the NIH as he seeks future employment.

“Another thing that is basically almost going to be eliminated all funding for is the NIH’s Fogarty International Center for Global Health,” Gurley said. “A lot of those things are poorly funded to begin with but then also they’re drastically cutting the budget.”

Concerns extended beyond the economic impact that Trump’s policies might have. Garner, who will enter the College’s School of Education next year after completing his major in biology, said he was worried about the negative effects the administration’s anti-scientific rhetoric could have on the students he will teach.

“Some of my fears are cutting funding for education and especially science education or having that public perception heightened when I’m going into the classroom and trying to teach students about really important concepts that are crucial to science, and especially in the field of my passion which is biology and of course, evolution,” Garner said.

Biology professor Stanton Hoegerman agreed, adding that anti-scientific rhetoric could affect the mentality of those who depend on the scientific industry for employment.

Perhaps in the long run, the major threat is the psychological one of ‘Come around or have no funding, change fields, don’t study controversial topics,’” Hoegerman said.

“Perhaps in the long run, the major threat is the psychological one of ‘Come around or have no funding, change fields, don’t study controversial topics,’” Hoegerman said. “That’s a real problem.”

Garner, however, said he believes that the perception of science is the most at risk.

“Encouraging potential viewpoints of science that are extremely negative in a sort of blanket way in which people become distrustful of science itself as an institution … is very terrifying, because science is many different things rolled underneath the umbrella term of ‘science,’ and I think it’s extremely important not to demonize that word,” Garner said.