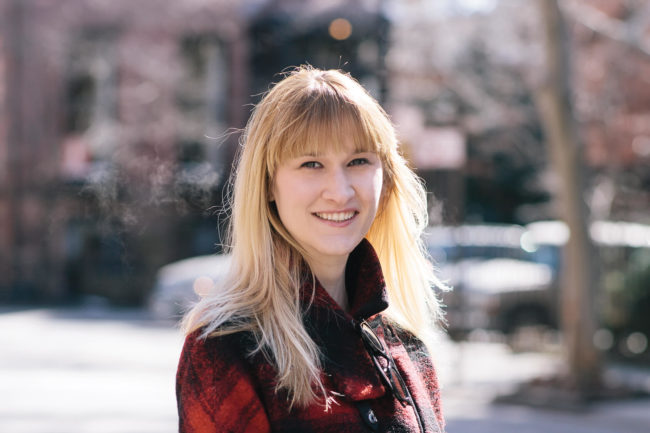 Picturing a conventional music critic might conjure the image of a smug hipster, clacking away at a keyboard, smirking as they give scathing reviews about popular music to prove a point.

If the review was written by Amanda Petrusich ’00, that is far from the truth. Her writing is empathetic; it’s funny; it makes bold pronouncements about culture yet takes time to delight in the details, whether a songwriter’s turn of phrase or a singer’s impassioned voice.

These days, she’s a staff writer for The New Yorker. However, long before she wrote pieces like “The Redeeming Virtues of a Phish Concert in New York,” she was a freshman attending her first Phish concert at the Hampton Coliseum and writing film reviews for The Flat Hat.

I love writing, and this was something that started for me at William and Mary,” Petrusich said. “My favorite part of my day is when I get to sit down and reason through what I think about something or make sense of the world around me via writing. It’s so calming — it’s like a weird period of solace. If I had a crappy day or someone was terrible to me, all that disappears when I’m in the document, or I’m in the song, or I’m in the piece.”

“I love writing, and this was something that started for me at William and Mary,” Petrusich said. “My favorite part of my day is when I get to sit down and reason through what I think about something or make sense of the world around me via writing. It’s so calming — it’s like a weird period of solace. If I had a crappy day or someone was terrible to me, all that disappears when I’m in the document, or I’m in the song, or I’m in the piece.”

Petrusich grew up in Hudson Valley, New York, the child of two public school teachers. When it came time to go to college, she yearned to get out of the Northeast and go somewhere different.

For Petrusich, that was Williamsburg, Virginia.

“I was attracted to the history of the place,” Petrusich said. “It felt ghostly and evocative and lovely, and the old campus was so beautiful, and I wanted to study literature and writing, and it seemed like a perfect place to do that.”

To her, the lack of a bustling city life in Williamsburg was a selling point. It allowed the campus itself to become a place for strange and interesting experiences.

“I remember sitting on the steps of Tucker, chain-smoking, being sort of angsty and young and reading all these poets for the first time and feeling like I was part of a tradition of writers and thinkers and readers,” Petrusich said.

Petrusich’s undergraduate experience is still vivid in her mind: the modernist poetry survey with professor Henry Hart, the creative writing workshops with professor Nancy Schoenberger, the film studies classes with professor Arthur Knight. These courses changed the way she thought about writing.

However, what proved to be the most influential towards her future career was the creative nonfiction class she took with Sam Kashner, the College’s writer-in-residence at the time.

When she wasn’t writing for class, Petrusich was immersed in campus publications. She joined the fiction staff of The William and Mary Review as a freshman; she later became fiction editor, then editor-in-chief.

“I couldn’t believe that it was a thing that I got to do,” Petrusich said. “We would sit in this room in the Campus Center, and writers from all over the world would send stories to the Review for consideration. I couldn’t believe I got to be a part of making those decisions.”

Her first review in The Flat Hat — and her first byline as a critic — was a less-than-favorable write-up of “The Cell,” a psychological thriller starring Jennifer Lopez and Vince Vaughn.

Her undergraduate years were spent reveling in new discoveries, from her first forays into writing about movies to the exploration of the jam band culture that dominated the campus music scene.

“William and Mary, at least for me, was a strange transitional period between being a kid and being a whole person alive in the world,” Petrusich said. “I made a lot of mistakes, and I thought I liked things that I didn’t like, and then I liked new things. It was a constant process of destruction and then reinvention.”

She’s grateful to have had that time, she said, and to have had it in a place like the College.

After she graduated with a degree in English and film studies in the winter of 2000, she interned at Rolling Stone magazine. After Rolling Stone, she got her MFA in nonfiction writing from Columbia University. She hasn’t stopped writing about music since.

Her love for music and for the people who dedicate their lives to it pulses in everything she’s ever written, from her three books — “Pink Moon,” “It Still Moves: Lost Songs, Lost Highways, and the Search for the Next American Music” and “Do Not Sell at Any Price: The Wild, Obsessive Hunt for the World’s Rarest 78rpm Records” — to her music journalism, which can be found in publications like The New York Times, Pitchfork and Paste.

It’s also something she endeavors to pass on to her students in the first-year writing seminar she teaches at NYU’s Gallatin School.

After almost two decades as a music journalist, she’s gotten the chance to search for these narratives among some of the world’s greatest musicians.

A standout moment to Petrusich was when she interviewed a hero of hers, Lou Reed of the Velvet Underground.

“He’s famously cantankerous,” Petrusich said. “But he was very kind to me.”

That’s not always the case.

“Sometimes you meet artists and you’re like, ‘Wow, what an a—hole,” Petrusich said.

She hesitated before admitting that Grammy-winning musician St. Vincent, someone who she admires immensely as an artist, was an “endlessly confounding” interview.

“She’s just so mindful and careful in what she’s saying,” Petrusich said. “You get a sense that you’re a cog in the machine. She’s got every right to do that, and she’s very smart, but she’s using the press in a certain way that she’s in charge of. People like that are really tough because you just feel like you’re cracking a safe.”

Although she admits that sneaking feelings of impostor syndrome never quite go away, Petrusich learned to trust her gut.

“That’s the thing as journalists — we’re always navigating how much time you’ll actually get to spend with someone before you have to go home and start to make these pronouncements about who they are and why their work matters,” Petrusich said. “Trusting yourself, trusting your instinctive reactions to things, as a critic, that’s the most important thing to have. … Readers respond to a writer being honest and forthcoming with how she feels about something.”

It took years of building confidence as a writer before she felt comfortable making those pronouncements. Yet when Petrusich talks about her work, it’s clear: the bigger story is what’s worth writing about.