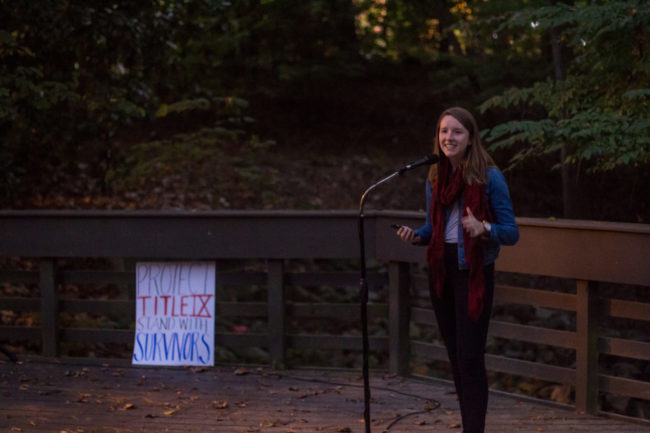 In a Sept. 7 speech at George Mason University, U.S. Secretary of Education Betsy DeVos announced plans to revise the government’s approach to campus sexual assault, primarily by revoking the 2011 “Dear Colleague” letter, which offers unofficial procedural guidelines. Since then, DeVos has issued interim guidelines, but has not established official procedures.

For students at the College of William and Mary, this has caused concern over how university administration will respond to DeVos’ revocation of the “Dear Colleague” letter, which recommends procedures such as a 60-day timeline for hearing cases. However, at a panel discussion led by administrators, students were told that university policy will not change in response to new guidelines.

This panel discussion, hosted Oct. 25 by 16(IX)3, Student Assembly and Someone You Know, provided student-faculty interaction on the issue of campus sexual assault policies. Weighing in on the discussion were Sexual Violence Prevention Specialist and Assistant Director of Health Promotion Mayanthi Jayawardena, Director of The Haven Liz Cascone, Chief Compliance Officer and Title IX Coordinator Kiersten Boyce and Dean of Students Marjorie Thomas.

Title IX, introduced in the Education Amendments Act of 1972, states that no person shall be subject to discrimination under any educational institution or financial assistance program; it has been popularized by equal opportunity in athletics but has gained traction in the last 30 years as an assurance for victims that sexual assault will not go unheard. 2011’s “Dear Colleague” letter from the Obama administration elucidated the measures an institution of higher education must take to protect the rights of students. One criticism of DeVos’ move to rescind the letter is that there is less burden placed upon perpetrators and, therefore, less protection for victims.

In her speech at George Mason University, DeVos said she wanted to create a space of justice for both the doer and the accuser, equalizing the burden of sexual assault. Proponents of the retraction praise its fairness, and opponents critique it for putting more pressure on those who have been assaulted. Because the “Dear Colleague” letter was not a mandate, its rescindment was uncomplicated, and DeVos has made clear that any law now made regarding Title IX will be more concrete.

“I’m one of those worried people,” Renata Botelho ’21 said before the panel.

A preview of the College’s 2016-17 climate survey reveals that campus statistics are not much different than the national average. 16(IX)3 members commented that the College’s statistics are higher than the national average. The panelists said they did not have concrete answers for why this is, but that they plan to increase initiatives regarding sexual violence education.

“[Freshmen] realistically get three hours [of education],” Jayawardena said with regards to Orientation discussion and EFYIs on sexual violence and prevention.

Thomas said that she allied herself with student organizations who were working for sexual assault prevention and policy change, and said that she wanted to “obliterate” the College’s statistics on violence.

Boyce, another panelist, said that the College will remain in a state of uncertainty while waiting for more concrete guidelines from the federal government.

“We will be in limbo for a significant period of time … 18 months, two years,” Boyce said.

Overall, the panelists agreed that the College’s so-called feedback loop has improved in response to change in national policy. They also underscored that it may not seem as if the administration or the various help centers give feedback or are transparent, but it is their topmost goal to do so.

After the panel, audience members had time to ask questions.

I was just very happy that people came and participated in the conversation at the end,” 16(IX)3 executive board member Brendan McDonald ’18 said.

“I was just very happy that people came and participated in the conversation at the end,” 16(IX)3 executive board member Brendan McDonald ’18 said. “And I was glad that the administration was so willing to … participate.”

Fellow 16(IX)3 executive board member Tess Thompson ’19 said she lauded the ability to have meaningful discussion with people in a position to make change.

“I think it’s great that we were able to have an open dialogue,” Thompson said. “I think a great part of that was the question-and-answer session.”

Thompson also said she thought the passion of the panelists for transparency was important. One panelist, Cascone, admitted that, during busy times, those running the operations are human too, and stepping back is a fair remedy to bolster communication.

Similarly, Boyce said that the process of preventing sexual assault has become more malleable than before, especially as the College is under Title IX investigation for a case reported last summer. Both this investigation and one that was opened in 2014 were the result of individual students filing concerns.

Under the changes put forth by the Department of Education, the College will continue in the same manner of including faculty, staff and student communication, so Boyce said the interim guidelines will not impact this second Title IX investigation.

After the panel, Thomas said she wanted to emphasize the issue of sexual assault and how it impacts certain populations, including Greek life and the LGBTQ community.

[D]o students feel … that they can come to the table?” Thomas said.

“[D]o students feel … that they can come to the table?” Thomas said. “Who do you sit at the table with?”