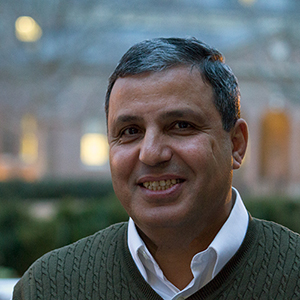 A world-renowned Arabic department did not form out of thin air at a colonial, Virginian college. The program is rather new, especially when compared with the age of the College of William and Mary, having been founded in the 1970s.

It formed through the work of the faculty, including that of Arabic professor Driss Cherkaoui.

For Cherkaoui, one of the most important aspects of his life is his commitment to the Arabic program at the College.

I wish I could have more time to write and to teach. There was no big challenge [through my career],” Cherkaoui said.

“I wish I could have more time to write and to teach. There was no big challenge [through my career],” Cherkaoui said.

Cherkaoui’s career spans multiple decades and three continents, but he said that the biggest challenge is his lack of time to commit to students.

Cherkaoui first received his undergraduate degree in Morocco and then went on to receive his master’s degree in Arabic studies from the University of Sorbonne in Paris. Then, in 1997, he was awarded his doctorate in classical Arabic literature from the same university.

“It was a very big opportunity to be there,” Cherkaoui said. “The Sorbonne is like when you say Harvard here. I was lucky, since my parents didn’t come from a wealthy family or anything like that.”

At a time when France had strict immigration policies, studying as a foreigner meant taking a series of tests to try and get into the program.

“I remember that year there were over 300 applicants, and only about 19 succeeded,” Cherkaoui said.

However, Cherkaoui said he has always felt at home in academia. Growing up, he went to a Quranic school, where he studied the Quran, of about 50 boys per grade. Cherkaoui remembers a teacher telling his family that he could see Cherkaoui’s future in Arabic studies, even then. Being a professor had always been a dream of Cherkaoui’s.

What was more surprising to Cherkaoui was when he found a home in America, a journey that began when he was offered to teach an intensive Arabic summer program at Middlebury College.

“I said to the Dean [of Middlebury], ‘I don’t speak English,’ and he said ‘Exactly, that’s what we want,’” Cherkaoui said.

Cherkaoui said he first considered the United States as somewhere he could work for the long run after going to Chicago for the first time.

Even though Cherkaoui never expected to live in America for so long, it has now been 26 years since his summer at Middlebury, and Cherkaoui said he is happy that he gets to raise a family in the United States.

“I love being in America,” Cherkaoui said. “Americans really are welcoming. It’s the land for all people, including the immigrants. American people are very nice, very generous and they want to know about the other countries.”

Cherkaoui’s eight-year-old daughter, fluent in both English and Arabic, speaks English like an American, without any accent. He says it is very clear to see that she is an American girl. Like a true American, Cherkaoui said he loves Thanksgiving, either having the feast at his family’s home or going to a friend’s house.

Working as a professor, Cherkaoui’s chief source of inspiration is his students, whom he said he considers brave for trying to learn such a difficult foreign language.

When you go to a classroom, and you teach and explain something, the students demand more and then the more the teacher wants to give,” Cherkaoui said. “Yes, we are teaching students Arabic, history, Arabic culture, but also, we learn from the students. We never stop learning as long as we are alive.”

“When you go to a classroom, and you teach and explain something, the students demand more and then the more the teacher wants to give,” Cherkaoui said. “Yes, we are teaching students Arabic, history, Arabic culture, but also, we learn from the students. We never stop learning as long as we are alive.”

Cherkaoui claims that the main way he has learned about American culture is through his students in class, speaking in Arabic.

“They will say things they like, what they don’t like, what the social classes are, things about their families, their friends, and we’re listening,” Cherkaoui said.

For Cherkaoui, teaching is more of a mission than a job.

“It’s a talent,” Cherkaoui said. “It’s not something that you can come into the class and anybody can do. You have to be gifted and talented, and it’s a mission. The person has to believe in it. And the students appreciate that, they can feel it.”

This mission is very much a team effort for Cherkaoui, as he said he is consistently thankful for the program’s faculty, the entire modern languages and literatures department and the College for everything they have done to foster the program.

“This is all teamwork,” Cherkaoui said. “It’s a good program because it’s a good team, and it’s a good team because we’re dedicated. Arabic, Japanese, Chinese, these are different than other languages. They take more time, more effort to learn than other languages. This is not like learning other European languages, with the same alphabet and mostly the same sounds. The team here is committed, so you need to spend time with the students. It’s really serious training,” Cherkaoui said.

For Cherkaoui, some of his future career goals include eventually getting a promotion, getting more courses established, attracting donors for the program and finishing a novel about the oral storytellers of Morocco. Cherkaoui said that this novel was an intense process of fieldwork, translating the Moroccan dialects into Arabic, and the Arabic into English.

Most importantly, Cherkaoui said he aims to continue his mission of spreading Arabic language and culture around the world.