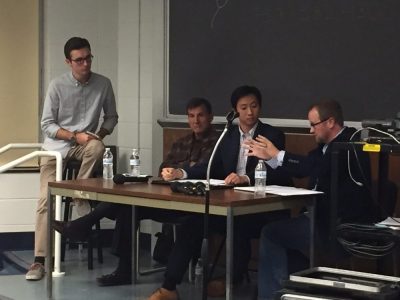 Greater City is a group of students who come from many different campus ministries and work to address poverty and homelessness in the City of Williamsburg. The group emphasizes methods that create real relationships with the homeless and impoverished people they are helping. In addition to dropping off food, the students also stay to hear stories and assist with spiritual, emotional and mental needs people may have.

So we visit and bring food support, but not only food support,” Panel Coordinator Megan Man ’18 said. “We say, ‘Food is great, but friendship is better.’ We visit the same people every week so we’re able to say, ‘Hey, I remember you had a really hard week at work last time, how was it this time?’”

“So we visit and bring food support, but not only food support,” Panel Coordinator Megan Man ’18 said. “We say, ‘Food is great, but friendship is better.’ We visit the same people every week so we’re able to say, ‘Hey, I remember you had a really hard week at work last time, how was it this time?’”

Man and the rest of the students in Greater City said they intended the panel to be something that starts the conversation about topics like poverty and homelessness at the College of William and Mary. They said they also hoped it would spark interest in students to get involved with some of the organizations present.

The panelists all came from different backgrounds engaging with poverty, which leads to a discussion that involves personal experience and policy. The first panelist, Fred Liggin, is the president and founder of 3e Restoration, an organization that helps community members in need transition out of homelessness and extreme poverty. Peter McHenry, another panelist, is an economics professor at the College with experience thinking about poverty academically from the lens of economics and policy. The final panelist, Chuck Mullaly, is a representative from the local nonprofit Latisha’s House that provides a home for women and girls who are victims of sex trafficking.

For all the panelists, raising awareness that issues like poverty, homelessness and sex trafficking exist in Williamsburg is the first step to tackling the issues.

“I see here in Williamsburg there is a bit of denial, and I wonder how much of that is tied to the tourism economy. You don’t want to see people flying signs everywhere,” Liggin said.

In addition to the tourism economy, the panelists said homelessness is easily overlooked in Williamsburg because of the layout of the city. The impoverished community has been pushed to the outskirts of the city where it is hidden from the view of those who stick to the area close by the College.

McHenry offers another explanation for the weak narrative of poverty in Williamsburg: It’s not as common.

“We talk about poverty a lot in really big cities and urban ghettos,” McHenry said. “Historically, there’s tons of poverty in really rural areas. We’re in a medium place where really there isn’t as much poverty here as in some places.”

The panelists said that the issues of poverty and homelessness are especially hidden from students at the College who are largely contained on campus, where they have little interaction with the outside community.

“I think in general, for the students here, it’s something that we don’t see so much,” Jack Ruszkowski ’21 said. “These hidden poverty centers, like the neighborhoods that are traditionally African American or traditionally minority, that’s something that’s a very real part of Williamsburg and the community we have here. You can’t just separate it out and say we’re in a different community.”

However, in the past few years the attitude toward homelessness in Williamsburg has shifted. The panelists said there is less denial, and more organizations are forming to help people through difficult situations, especially in religious communities. Ashley Willis, who works with Community of Faith Mission in Williamsburg said that people are not opposed to this conversation.

There’s still a lack of awareness among some parts of the population, but I don’t really see a hostility towards it,” Willis said.

“There’s still a lack of awareness among some parts of the population, but I don’t really see a hostility towards it,” Willis said.

Greater City advocates for solutions to poverty and homelessness that are “relational” instead of “transactional.” This means interacting with homeless or impoverished people so they feel like a part of the community. The organization also acknowledges that policy changes are important when addressing such expansive issues, but it want students to get involved at a grassroots level.

“Find organizations like Greater City,” Liggin said. “Join in on what they’re doing by bringing food to the hungry, but staying and being present long enough to share the meal and being with them so it’s not just transactional. They’re not problems to solve, they’re people to be with. I think start there.”