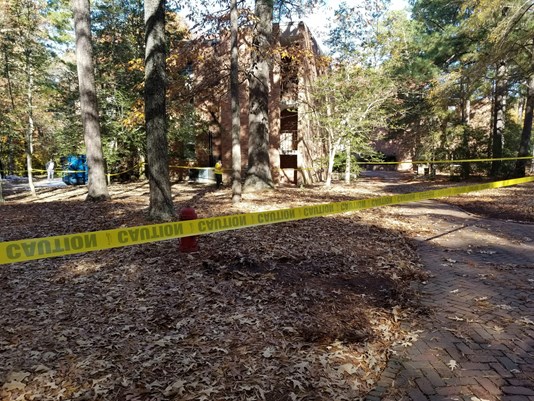 On Nov. 28, the Botetourt Complex and the Keck Lab regained power, and Botetourt residents were required to move back into their residence halls by 11:00 a.m. the following day.

The power outage and resulting evacuation of Botetourt ended up costing the College of William and Mary a total of $63,000 as of Dec. 5.

$39,000 was spent on the 171 hotel rooms rented for two nights, according to College spokesperson Suzanne Seurattan.

Most of the repair costs were handled by Dominion Energy, as the transformer that failed was their equipment,” Seurattan said in an email.

“Most of the repair costs were handled by Dominion Energy, as the transformer that failed was their equipment,” Seurattan said in an email.

The repair process consisted of both Dominion and College electricians assessing the situation and determining what would be needed for the repairs, and locating materials in the Richmond area. A new transformer, primary and secondary feeder cables, and splicing materials were all required for the repairs.

“Once the materials were on site the Dominion Energy electricians made the repairs with support from our electricians,” Seurattan said in an email. “They worked in shifts for approximately 24 hours straight to complete the repairs and re-energize the Botetourt Complex and Keck Lab.”

Spotswood Hall resident Jasmine Howard ’21 said she believed that after an initial period of confusion, the College did a good job handling the incident.

“We didn’t really know what was going on while rooms were getting assigned, like if we would be with just our roommate or in a quad or something like that,” Howard said. “I guess it’s happened before, but I was surprised at how efficient and organized it all was. They gave us our rooms in an hour or so.”

Howard also said that the most important thing was the College’s speedy repairs. The repairs were originally estimated to take between three to five days but ended up only taking around one day.

“[I do think] the school did a good job, and that’s because it only took one night,” Howard said. “If it took three to five days like they initially told us, I would’ve been really annoyed, but one night was fine.”

Seurattan explained in an email that the speedy repairs were doable due to the accessibility of necessary parts, the fact that damage was limited to the transformer and its immediate vicinity, and through the efficiency and dedication of electricians and faculty.

“It is difficult to immediately estimate the repair time without fully investigating the extent of the damage or the configuration of the electrical infrastructure,” Seurattan said. “Therefore, initial estimates for repair generally take a worst-case approach.”