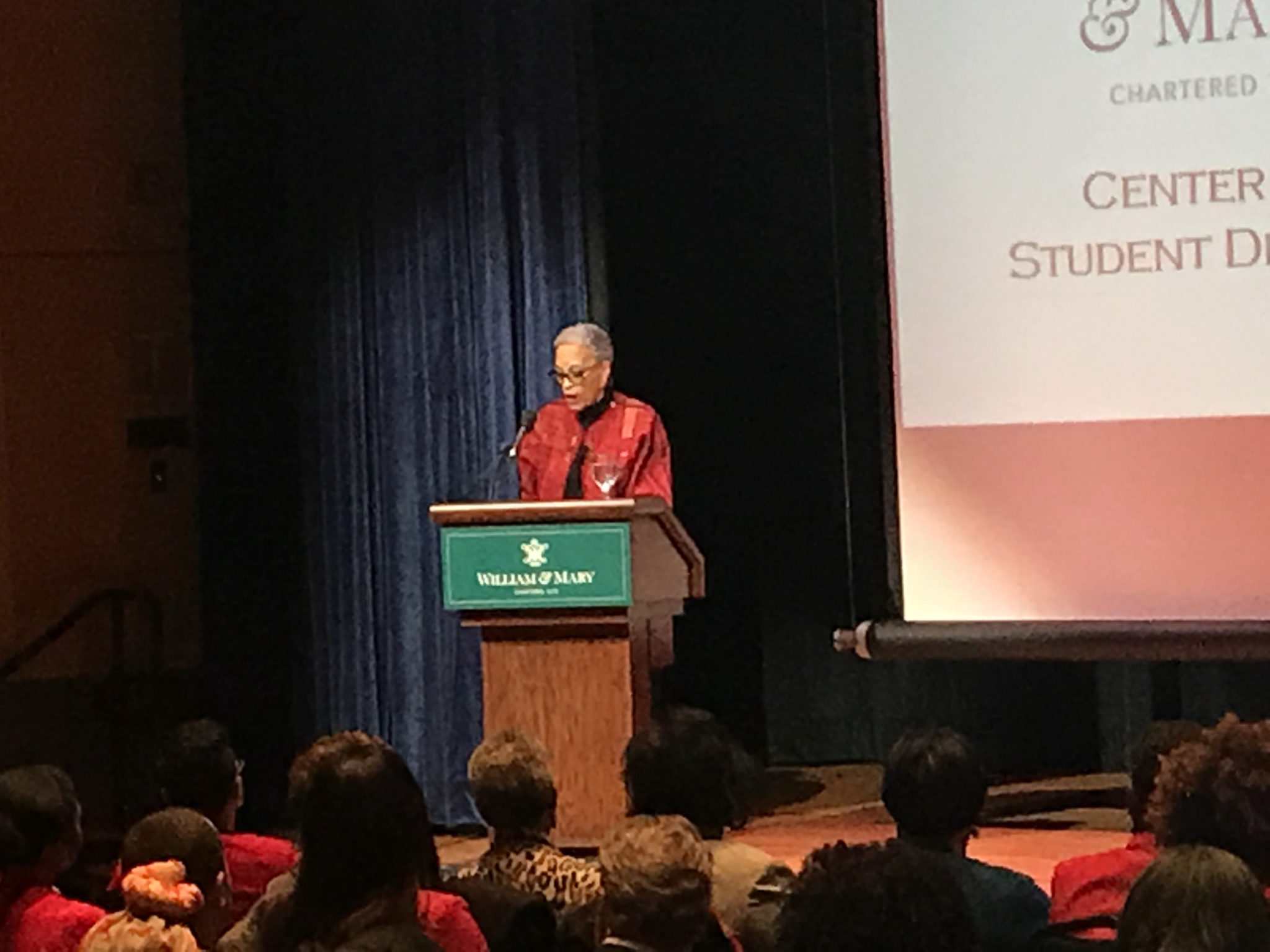 Thursday, Jan. 25, the Center for Student Diversity sponsored the annual Martin Luther King Jr. Commemoration, featuring former director of the Smithsonian National Museum of African Art and current professor at Emory University Johnnetta Botsch Cole as the keynote speaker. The Commemoration was also part of the 50th anniversary celebration of African-American students in residence at the College of William and Mary.

Assistant Director for the Center for Student Diversity Shené Owens introduced the event, which began with a dance performed by students DeLauren Davis ’18, Neonna Ferebee ’20, Jordan Gilliard ’18 and Leah Jones ’19.

Disruptors are recognized by the impact of their behavior,” Granger said.

“Disruptors are recognized by the impact of their behavior,” Granger said.

Cole greeted the crowd as “sisters, brothers and siblings,” referencing her anthropological background and explaining that kinship is not just biological but also about behavior, shared beliefs and values.

“I am making an assumption tonight, that here in this place, there’s a gathering of folks who share Dr. Martin Luther King’s dream,” Cole said.

Referencing the current political climate, Cole also discussed how she believes the fight for civil rights is still very much an ongoing process.

“I believe that if King was among us, he would say that progress has been made towards making some of his dreams a reality,” Cole said. “But I also think he would hasten to say that we are a mighty, mighty long way from the mountaintop.”

Cole expanded the conversation into the broader realm of civil rights as well, speaking about how the first African Americans in residence at the College were women.

Cole said she believed that fighting for women’s rights and LGBTQ rights is a way to build on King’s legacy, referring to King’s wife in order to make this point.

“The amazing and grace-filled Coretta Scott King,” Cole said. “Her views, particularly her progressive views on women, and on individuals in the LGBTQ community, were in many ways ahead of her time. Coretta Scott King went on to say that homophobia is like racism, and antisemitism, and other forms of bigotry, in that it seeks to dehumanize a large group of people, to deny their humanity, their dignity, their personhood.”

Cole’s keynote ended with a standing ovation and a lengthy question-and-answer session in which she was asked about topics ranging from Cuba to how to bridge ideological gaps.

“We are living such segregated lives, including in terms of political views. Now I’m the first to tell you, this is the most difficult conversation you could possibly have,” Cole said. “It is a conversation that requires seeking common ground when everything says that there is none.”

I would like to end with, ‘the time is always right to do right,’” Weatherly said.

“I would like to end with, ‘the time is always right to do right,’” Weatherly said.

Alexandra Harris ’21 attended the commemoration and said she found it very enjoyable.

“Being an African-American female on this campus, events like this can be really reassuring,” Harris said. “It can be, I don’t want to say discouraging, but at times being on campus can be a little difficult. So, the sense of community underrepresented students, faculty and people on campus have, it makes being here comfortable.”

Harris said that she felt lucky to have her freshman year coincide with the 50th anniversary of African-American students in residence. She also said that the plethora of events focusing on the African-American community and diversity should continue regardless of whether or not it is a significant anniversary.

“They might be able to say, ‘it’s the 50th anniversary this year,’ but the number of events and guest speakers that have been going on to represent the African-American community on campus, I think that should be something that’s normal,” Harris said. “I don’t think it should just be for the year.”