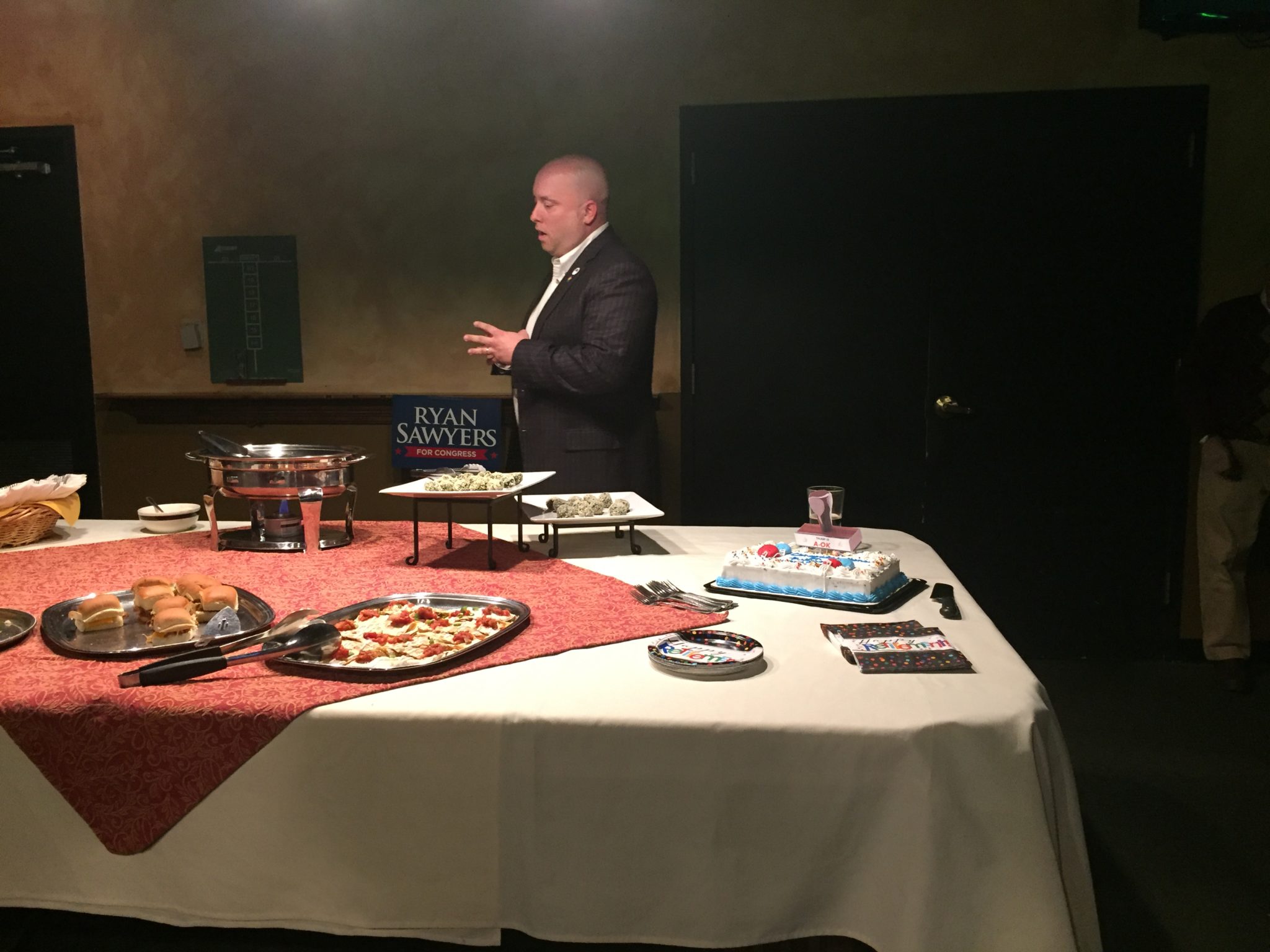 Williamsburg’s Corner Pocket Club is host to a bar, multitudes of pool tables and life-size cutouts of Rob Wittman and Donald Trump. However, this atmosphere is not reflective of the political beliefs and goals espoused by congressional hopeful Ryan Sawyers and his supporters as he campaigned for office there Jan. 25.

Sawyers currently serves as the chairman of the Prince William County School Board and is one of four Democratic candidates running to represent Virginia’s 1st Congressional District. Thursday evening, he met with potential voters and prominent people in the Williamsburg community to discuss campaign issues and to fundraise. He then gave a speech about his life and what he has planned for Virginia’s first district should he win the election in November.

Sawyers grew up in the small town of Cumberland, Maryland and then proceeded to play college baseball for four years. After that, he started his own sports marketing company, which allows him flexibility to travel on the campaign trail.

In his two years as school board chairman, Sawyers said that he has given teachers step increases both years, which he says addresses not only a wage issue, but also a women’s issue, since 75 percent of teachers are women.

You can’t convince me at all that if 75 percent of teachers were men we’d be talking about underpaid teachers,” Sawyers said. “We would have solved that problem a long time ago.”

“You can’t convince me at all that if 75 percent of teachers were men we’d be talking about underpaid teachers,” Sawyers said. “We would have solved that problem a long time ago.”

Sawyers supports a free public college education. He says this is because Article VIII of the Virginia constitution guarantees a free elementary and secondary education and that because a college education has become essential for a secure job that allows for a solid middle-class lifestyle, it is crucial that everyone be able to receive that education.

“We’re burdening our youngest professionals with so much debt that they can’t afford to buy a house, invest in the business they may have just studied for the last four years,” Sawyers said. “But here’s the biggest thing: we’re actually crushing rural America at the same time.”

Sawyers said that he wants to invest in young professionals so they are able to go to school and not incur debt that forces them to move to wherever high-paying jobs are. Instead, they can remain in the rural towns where they grew up and give back to the community that paid for them to go to school.

Sawyers said that students at the College of William and Mary should vote for him because he plans to stand up for the rights of young students looking forward to the professional world.

Speaking on immigration, Sawyers said that his great-grandparents immigrated to West Virginia from Italy. He said this family history has taught him that immigrants assimilate at extremely high rates. He said that a majority of the generation that is born in the United States speaks English as its primary language, which was true of his grandparents.

While Sawyers said that he supports those who are protected under Deferred Action for Childhood Arrivals, he said that the more important issue to focus on is the legal path to citizenship because it is more tenuous.

“Anyone who’s against DACA really just needs to look in the mirror and then if that doesn’t work, get another mirror,” Sawyers said. “Because DACA’s not the hard one.”

Founder of the political advocacy organization Williamsburg Indivisible Group Mike Hatfield said that he was in attendance because his organization is specifically aimed at advocating political action against the Trump administration. Unlike the way campaign stops are traditionally handled, with the candidate delivering a stump speech, shaking hands and moving on, Hatfield said he encourages candidates to spend more time talking with voters directly about the issues.

“We are trying to resist the Trump administration,” Mike Hatfield said. “Most of the people in our group are clearly Democrats, but we have some who are Republicans and just have a real problem with Trump. This guy in the funny hat,” he said, pointing toward the cutout of Rob Wittman, “is our current congressman in the 1st Congressional District and we are trying very hard to try and not let him get elected.”

An attendee at the event Caroline Hatfield said that she fully supports Sawyers and that the 1st Congressional District needs someone like him in order to take on Wittman, the incumbent in the race.

“Ryan is the kind of guy we need to be aggressive to go after Mr. Wittman who likes to lay low and keep quiet and get his picture taken in front of big ships,” Caroline Hatfield said.

One of the organizers of this year’s Women’s March on Williamsburg, Heather Meaney-Allen, said that she came to Sawyers’ campaign event to support him because of his political experience, communication skills and passion for the work. While Meaney-Allen said that she agrees with Sawyers’ opinions, the most important objective for her is to take the seat back from Wittman.

We need a Democrat in this seat. Wittman doesn’t do what he says he’s going to do … he says one thing and he does another,” Meaney-Allen said. “And I’m tired of it. Enough. We need a balanced government in this country. We’re completely out of balance. With Donald Trump in the White House we need the Senate to be able to check him.”

“We need a Democrat in this seat. Wittman doesn’t do what he says he’s going to do … he says one thing and he does another,” Meaney-Allen said. “And I’m tired of it. Enough. We need a balanced government in this country. We’re completely out of balance. With Donald Trump in the White House we need the Senate to be able to check him.”

Meaney-Allen said that a goal for her is to stand up to President Trump by resisting through political action.