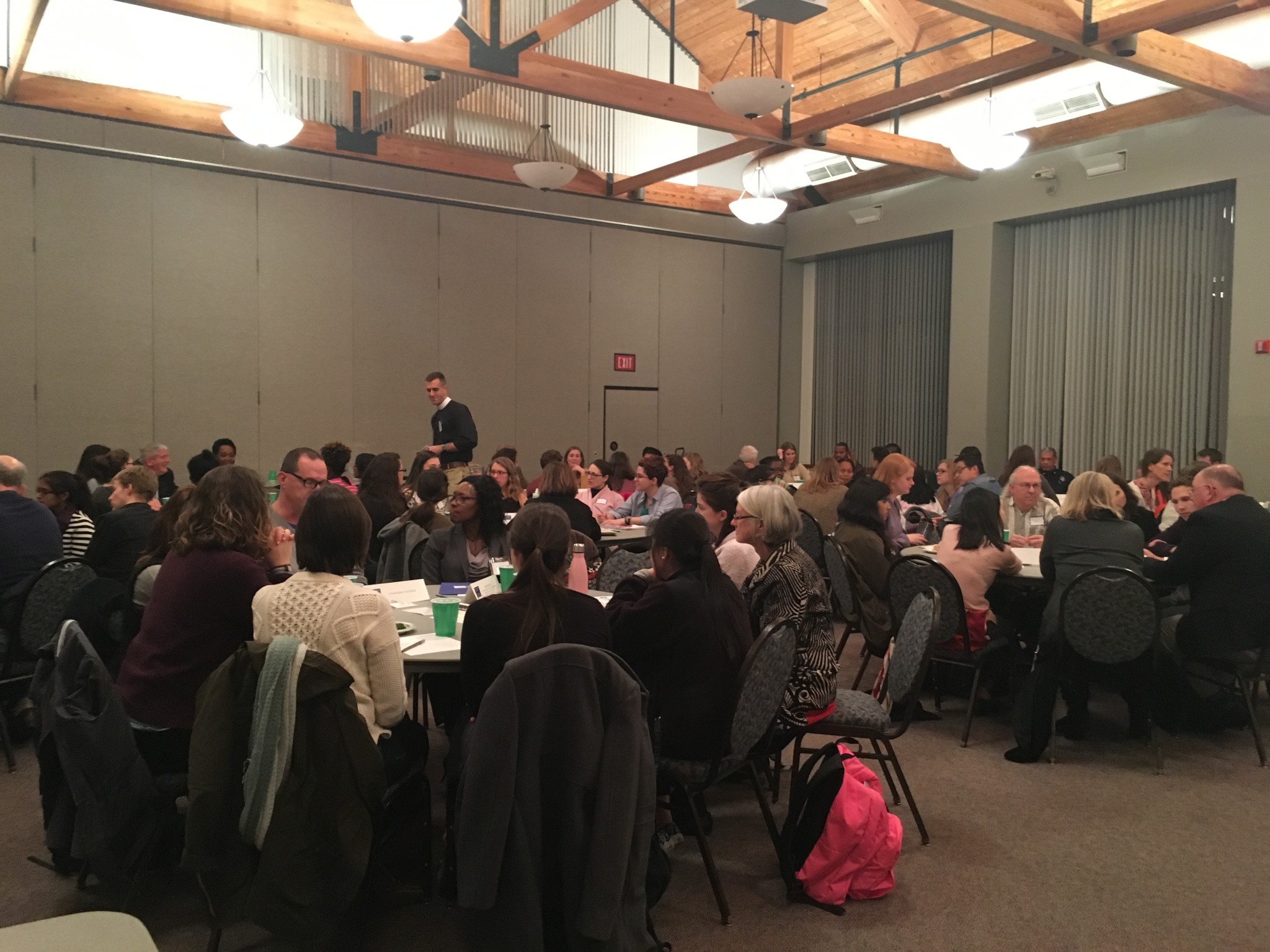 The second Daily Work of Justice conversation, held Feb. 10, focused on the experiences of those employed in the criminal justice system. Speakers were of a variety of occupations including judges, police officers, court interpreters and attorneys.

Speakers and attendees discussed shortcomings they have seen within the legal system. Guest speakers brought with them stories of disconnects between the incarcerated and the criminal justice system.

Jan Roltsch-Anoll ’81, J.D. ’84, a judge in the Prince William County Juvenile and Domestic Relations District Court, talked about weaknesses she had seen in the juvenile court system.

Roltsch-Anoll discussed how juveniles are being channeled out of schools and into the legal system. This trend has come to be known as the school-to-prison-pipeline, and according to her, is a result of police presence in schools and new zero-tolerance policies. According to the Justice Policy Institute, the number of school resource officers in public schools increased by nearly one-third between 1997 and 2007.

“All through Virginia, some charges that are particularly troubling right now are ones that are rising from schools,” Roltsch-Anoll said. “Virginia has the largest number of school-related juvenile delinquency charges in the country, so we are criminalizing school behavior that used to be dealt with in the school system.”

According to the United States Department of Education, 92,000 students were arrested in school between 2011 and 2012. 74 percent of the arrests made in New York City were for misdemeanors or civil violations.

Another issue discussed at the event was the phenomenon of unqualified court interpreters. According to those in attendance, this issue affects victims, witnesses and perpetrators in all types of courts across the country.

Patricia Michelson-King, a federally-certified court interpreter and professor at Virginia Commonwealth University, described many occasions in which she had seen interpreters fail to communicate effectively with their clients.

King told stories of interpreters confusing the Spanish words for “cookie” and “slap.” She described an experience in which an interpreter could not translate the parts of the body, so instead they pointed to parts of their own, shouting, “Aqui! Aqui!”

You will say everything but there’s that perception that ‘Oh anybody who speaks [a language] can do it,’” King said.

“You will say everything but there’s that perception that ‘Oh anybody who speaks [a language] can do it,’” King said. “So as a result I have seen a lot of mistakes and a lot of things left out and you know many situations where justice has really not been served because the voice of the person and the speaker is not heard, or the non-English speaker did not really hear what was being said and wasn’t really present in their trial or in their hearing.”

Attendees at the event said that they gained valuable knowledge about current issues in our legal system and had the opportunity to hear first-hand accounts of injustice from people of many different occupations.

“I consider my experience tonight to be really fortunate because the person that I got to speak with was doing something that I’m directly interested in doing later on,” Lydia Hurtado ’17 said. “I learned a lot and then also had a lot of things that I have learned in a different context be affirmed within this legal context which is the one that I’m more passionate about.”