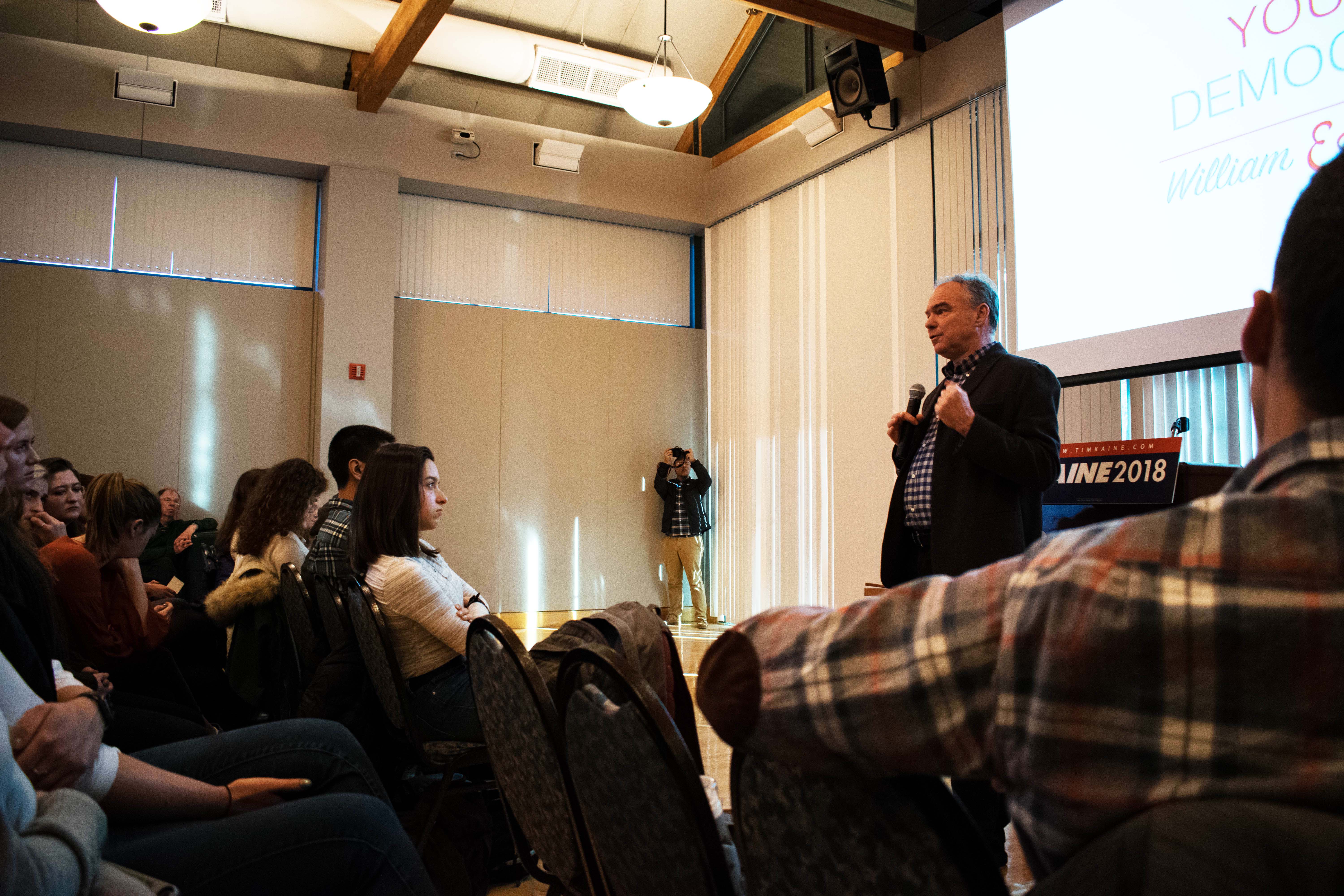 Last Saturday, Feb. 3, a crowd of almost 200 people gathered in the Chesapeake C room of the Sadler Center at 2:15 p.m. to attend a meet-and-greet with U.S. Senator Tim Kaine, D-Va., hosted by the College of William and Mary Young Democrats.

Among the topics of the community conversation were Black History Month and Kaine’s current bid for re-election. He spoke for about 45 minutes and spent the remaining time taking questions from the audience. Kaine tackled the issue of diversity as one of his key points. His speech emphasized the history of diversity in the United States as one of its greatest virtues.

“What happened right here was the Big Bang,” Kaine said. “The mixing of Native Americans and Europeans and Africans within a few square miles, that’s really the Big Bang that created this nation of 330 million. A nation of diversity and beauty and richness and struggle and challenge, but a nation whose values are very much under assault, I believe now, but whose values are ultimately strong enough to withstand the assault, if we all do what we can.”

Kaine also went on to discuss growing diversity in America, immigration policy and the importance of supporting beneficiaries of the Deferred Action for Childhood Arrivals program in Virginia. On the topic of the Commonwealth’s political climate, Kaine was optimistic.

“I’m seeing energy around Virginia that I have never seen in my career in politics,” Kaine said.

“To see so many people here, that’s what makes me particularly excited,” Kaine said. “I’m seeing energy around Virginia that I have never seen in my career in politics.”

He also went on to discuss the 2017 elections, which included victories for Ralph Northam in Virginia and 15 seats picked up for Democrats in the House of Delegates. Kaine described these victories as giving the nation a “hope injection” about the engagement of the American public at a time when his colleagues in the Senate and people throughout the country really needed it.

He spoke about U.S. President Donald Trump’s administration and the state of American democracy.

“I will say that it feels very existential right now,” Kaine said. “You feel like you could walk around the corner and run into a constitutional crisis the likes of which the nation really has not seen since 1787.”

Kaine also criticized Trump’s actions regarding treatment of the FBI, the Russia investigation, diplomacy and foreign policy. His overall message, however, remained hopeful for the future.

“The present is filled with opportunities and challenge, but it is something that excites me every day,” Kaine said. “I’m going to advance everywhere we can but part of the job now is defending everything we must.”

Kaine also took several audience questions on subjects ranging from anti-globalization and isolationism to lessons learned in 2016 to public education and college affordability. The crowd of roughly 180 people was overall very enthusiastic about Kaine’s message and campaign.

“He knew how to approach the crowd very well, he threw in some casual jokes and was also pretty serious and on point about his goals as senator,” Nazrin Garibova ’20 said.

“He knew how to approach the crowd very well, he threw in some casual jokes and was also pretty serious and on point about his goals as senator,” Nazrin Garibova ’20 said. “I think it was very motivating to go out and vote in the 2018 election.”

The positive response could also be a result of the way the event was publicized — advance registration was required to attend and no information about it was provided on the Young Democrats’ Facebook page or in public posting locations around campus. Rather, it was only sent to people signed up for the Young Democrats email list.

“We were nearly at capacity for the event, so decided to publicize only through our listserv,” Young Democrats President Greg Akerman ’18 said in an email.

The Young Democrats also asked those in attendance to sign a petition for Kaine to appear on the ballot and handed out Kaine 2018 stickers.

Kaine’s concluding statement looked to the future. He said he has hope for the upcoming 2018 election and the possibility that it will bring a wave of Democratic candidate wins, which would be made possible in part by the energy showcased in the 2017 elections in Virginia.

“Nothing shows this [energy] stronger than what you helped to do in Virginia in 2017,” Kaine said. “You know that we won the three statewide offices, you know that we picked up 15 seats in the House of Delegates. And of the 15, 11 were women and most were first-time candidates and highly diverse people of color, LGBTQ people, immigrants — a group of people who really look like who Virginia looks like right now.”