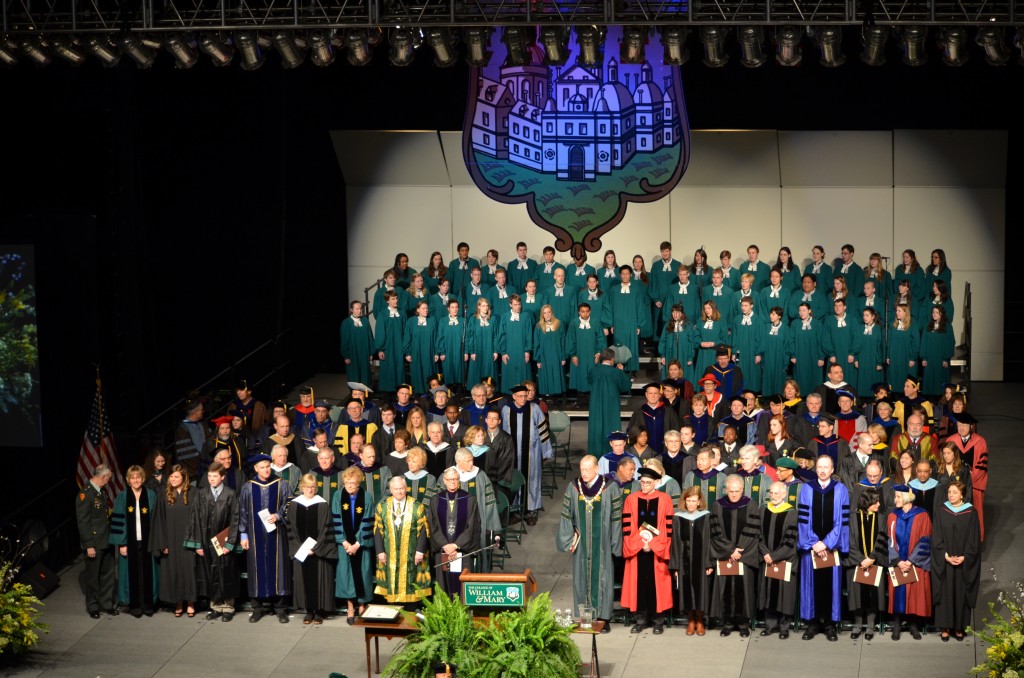 Just a few weeks after his inauguration, Virginia Governor Ralph Northam will speak at the College of William and Mary’s Charter Day ceremony, marking the university’s 325th birthday. Every year, this event marks the anniversary of when the College received its royal charter. This year, Northam will speak at the ceremony in Kaplan Arena, which is scheduled for Feb. 9.

Additionally, following another Charter Day tradition, College Chancellor and former Secretary of Defense Robert Gates ’65 will attend the ceremony and offer his remarks.

This 325th milestone is a testament to William & Mary’s indomitable spirit over the centuries,” College President Taylor Reveley said in a press statement. “This school year we also commemorate the 50th anniversary of the first African-American students in residence at William & Mary. Ralph Northam has been a longtime friend of higher education in general and William & Mary in particular.”

“This 325th milestone is a testament to William & Mary’s indomitable spirit over the centuries,” College President Taylor Reveley said in a press statement. “This school year we also commemorate the 50th anniversary of the first African-American students in residence at William & Mary. Ralph Northam has been a longtime friend of higher education in general and William & Mary in particular.”

Previously, Northam served as the state’s lieutenant governor under Terry McAuliffe. In November 2017, he became the 73rd governor of the state. Northam attended the Virginia Military Institute, then Eastern Virginia Medical School. He later held residences at Walter Reed Army Medical Center and Johns Hopkins Hospital, and also served in the U.S. Army, where he treated soldiers wounded in Operation Desert Storm.

His career in politics began in 2008, when he was first elected as a Virginia state senator, a position he held until 2013 when he was elected as lieutenant governor. During his tenure in that position, he focused on economic development, early childhood education, mental health reform, women’s health care access and protecting environmental resources.

Harris, another recipient of an honorary degree, was the first tenured African-American faculty member at the College. Harris joined the English department in 1973. She then went on to teach at the University of North Carolina Chapel Hill an Emory University. Now, she is a research professor at the University of Alabama and is considered one of the nation’s leading scholars in African-American and Southern literature and cultural theory.

Additionally, Harris has written and edited books including “The Concise Oxford Companion to African American Literature” and “Summer Snow: Reflections from a Black Daughter of the South.” She founded the George Moses Horton Society for the Student of African American Poetry in 1996 as well. She most recently returned to the College last year as the English department’s Sara and Jess Cloud Distinguished Lecturer, when she received an award to honor her historic role.

McGlothlin and Smith are two alumni being honored for their philanthropic contributions. McGlothlin and her husband, James McGlothlin, contributed to the renovation of Zable Stadium, are honorary co-chairs of the “For the Bold” campaign, the College’s current fundraising effort and have endowed scholarships at the Raymond A. School of Business and the Marshall-Wythe School of Law.

Additionally, McGlothlin served as the College’s first lady during the presidency of Paul Verkuil. She now serves as the senior vice president of UC Fine Art in New York and is a board member of the United Company Foundation and the James W. and Frances G. McGlothlin Foundation.

Smith, the other alumna recognized this Charter Day, has also maintained ties to the College since graduating in 1951. She has endowed scholarships for freshman seminars, financially supported the renovations of the Alumni House and Zable Stadium and is also an honorary co-chair of the “For the Bold” campaign.

She has also served on the boards of the Foundation for Recovery, the Virginia Commission for the Arts and the Virginia Museum of Fine Arts. She currently is a trustee of the Thomas Jefferson Foundation and supports the Boys and Girls Club, Habitat for Humanity, Shelter for Help in Emergency and Camp Holiday Trails.

While a student at the College, Smith was a member of Pi Beta Phi sorority and was a philosophy major.

The ceremony, scheduled for 4 p.m. Feb. 9 in Kaplan Arena, will mark the 325th anniversary of the College’s royal charter, which was granted Feb. 8, 1693.