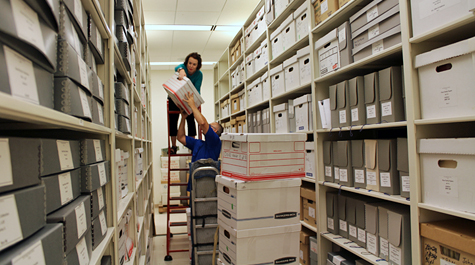 Former U.S. Secretary of Defense Robert Gates ’65 may be used to traveling first class, but his personal papers recently made a cross-country trip in a moving van, destined for the depths of the College of William and Mary’s Special Collections archives.

Three years after the announcement that Gates planned to donate his personal papers to his alma mater, the files were delivered to Earl Gregg Swem Library Thursday, Sept. 1, along with a gift of $50,000 to catalog and digitize them. Staff at Swem unloaded 106 boxes of personal photos, papers, schedules and films from a moving truck that had crossed the country from Gates’ home in Washington State.

They were re-shelved in the archives of Special Collections, adding to a collection of alumni documents that includes those of Glenn Close ’74, Linda Lavin ’59, Chris Bram ’74 and TV producer Bill Lawrence ’90, the screenwriter for the television show Scrubs.

The cargo traveled for two weeks to get to its final destination at the College, and its packaging and shipment required special planning on the part of both the Special Collections staff and of Gates himself, who had already organized many of his files into labeled boxes.

“I made an initial trip last summer to look at the papers and talk with [Robert Gates], and then made the trip recently to box them up and get them ready for transfer,” Director of the Special Collections Research Center Jay Gaidmore said. “Most of the stuff was in locked file cabinets and most of the Department of Defense files were boxed up … He’s got a guest office, off of his house where he has his books and mementos and papers and all that kind of stuff. And then he had some stuff in a storage shed in the garage.”

Aside from a few newspaper clippings Gates had set aside, the Special Collections staff took a majority of Gates’ compilation, something that does not often happen for large donations. At least four more boxes that were left behind have been added to the collection since its delivery, and the total number now adds up to 110. Many have yet to be opened, but among them lie papers from Gates’ time at the Central Intelligence Agency and National Security Council, his presidency of Texas A&M University, his term as Secretary of Defense and his current role as Chancellor of the College.

Though the collection consists primarily of professional papers, Gates also included mementos from his start in graduate school at Indiana University and as an undergraduate at the College, filing away a few term papers he wrote as a student as well as his report cards.

“I had a chance to have dinner with him and he told stories of being in school here,” Gaidmore said. “He is very pleased to have his papers here at his alma mater.”

Gates graduated from the College in 1965 with a bachelor’s degree in history. He worked as the business manager of the William and Mary Review, as well as a dormitory manager and Orientation Aide. He was also an active member of Alpha Phi Omega, a service fraternity here at the College, and has continued to show his support for his alma mater by being a trustee of the William & Mary Foundation Board and speaking at Charter Day on multiple occasions.

Beyond the records of his academic career at the College, the collection also contains a variety of photos from Gates’ professional career, certificates and plaques, speeches, minutes from meetings he attended, electronic files downloaded from the Department of Defense as well as some of the original manuscripts from the books he has written. All materials were approved by the Department of Defense to be donated, so they do not include any classified material.

“Chancellor Gates’ papers will give researchers and scholars unique insight into recent political affairs and historical events. With primary documents covering his time at the CIA, National Security Council and as Secretary of Defense, the scholarship possibilities are immense,” Associate Director of Strategic Communications and Outreach for Swem Tami Back said in an email.

Now that the papers have reached their final home, the Special Collections staff faces the task of processing and cataloging its new donation.

“The first step is to do arrangement and description,” University Archivist Kim Sims said. “The photographs will be sleeved. The information on CDs and DVDs, whatever format, we will upload to our digital repository for permanent preservation.”

The first step is to do arrangement and description. The photographs will be sleeved. The information on CDs and DVDs, whatever format, we will upload to our digital repository for permanent preservation. — University Archivist Kim Sims

According to Sims, the biggest task for the staff will involve creating a collection guide which will include a short biographical note about Gates as well as what is in the collection, with a detailed list of the contents of each box. Ultimately, the staff said they hope to fully digitize most of the photos and parts of the collection to be available for researchers online.

“That’s going to take some time, but there is a plan to do that,” Gaidmore said. “They need to be processed first, arranged and described, and made available to researchers, and then we’ll come up with a plan to mass digitize and make them available online for all those to see.”

While digitizing the collection will take time, an online archive will give students much easier access to the items, eliminating the security protocols and procedures that accompany the process of accessing the files in person.

Regardless of the amount of remaining work, the Special Collections staff said they hope to make the materials available to students as soon as possible, with at least a portion available by Charter Day.

Though Special Collections caters to graduate students and scholars from around the country who work with its archive of materials, Gates’ papers will be accessible to undergraduates who wish to see them as well.

“Undergraduates are allowed to use anything we have,” Gaidmore said. “This stuff’s here for the students,  not just scholars.”