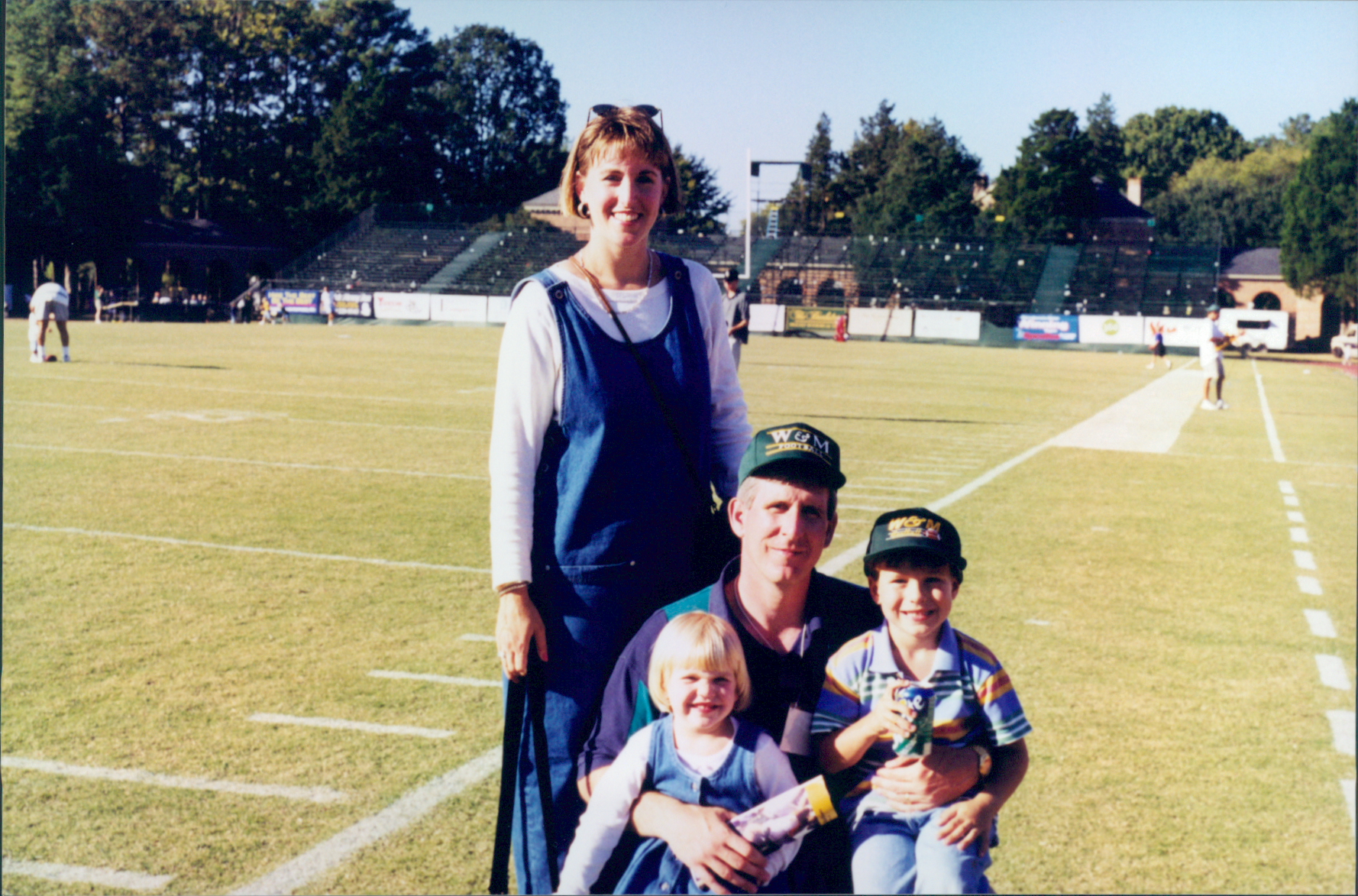 For the Stottlemyers, you might say that Tribe Pride is hereditary. Starting at age four, Caroline Stottlemyer ’16 was a College of William and Mary cheerleader for several Halloweens in a row. Her interest in the College began after she attended a few Tribe football games as a child.

“I have a picture of me when I was four or five with, like, the entire William and Mary cheerleading team,” Caroline said. “It was probably the highlight of my year. I always got so excited going to the football games.”

Caroline’s father is Rector of the College’s Board of Visitors Todd Stottlemyer ’85, a former offensive lineman for the College’s varsity football squad. Caroline vividly remembers meeting the team with her family.

“My older brother Zack was four at the time, and he wandered over and made friends with one of the guys on the football team, Peter Coyne,” Caroline said. “Anyways, the team hung out with Zack after the game, and we stayed friends with Peter. There’re pictures of my brother and I hanging out with him at games. Now [Peter’s] married with kids.”

Peter Coyne ’98 remained friends with the Stottlemyers, and today serves on the Annual Giving Board of Directors. Todd, in the meantime, began his tenure as rector of the College in July, after two years of serving on the College’s Board of Visitors.

Originally from Bronxville, N.Y., Todd first learned about the College while on an eighth grade field trip to Colonial Williamsburg. This overnight middle school expedition happened to coincide with a major national event.

“The day we left was the day that President Ford and the then-Governor Carter were going to do a presidential debate here on campus,” Todd said. “We did lots of things in Colonial Williamsburg, but we also had the chance to get on campus and discover this thing called the College of William and Mary.”

In a few years, Todd would return to the College as a student. He majored in government, a field of study that Caroline hopes to take up as well. Todd belonged to Kappa Sigma Fraternity and became a member of the Athletic Advisory Council for the President through his experience with the football team.

Now, instead of participating in campus organizations, Todd meets with student groups in order to discuss the future of the College. He cites this as his favorite part about being the rector.

“I’ve been on campus, meeting with students, faculty and members of the staff,” Todd said. “I’ve met with student leaders, just to sit down and have a conversation. I listen to what’s on their minds and hear about how the food is. It’s always fun coming back on campus, especially to spend time with students.”

Todd is not the first person from his freshman hall to rise to the post of rector. His freshman roommate on the third floor of Yates, Michael Powell ’85, served as rector from 2006-2009. The son of a former Secretary of State, Powell was the College’s first African American rector and is currently the head of the National Cable and Telecommunications Association.

Having sat on both the Athletic Education Foundation and the William and Mary Foundation Board, Todd has remained involved with the College since graduation. Now that his daughter is a student at the College, Todd notes that he possesses a rather unique perspective.

“I get to wear three hats,” Todd said. “One as a former student, one as the parent of a student and another as someone who’s on the governing board of the college. That’s a different perspective, but it’s interesting to get to listen to [Caroline’s] point of view, because she’s a student.”

Caroline roomed in Jefferson her freshman year and belongs to Delta Gamma Sorority. She enjoys playing on the club lacrosse team, as she was involved with the sport in high school. The second oldest of four children, Caroline is excited to have her family visit the College for Family Weekend. Her older brother Zack, who befriended the Tribe football squad as a child, is a junior at Christopher Newport University. She also has two younger siblings in high school: Matt, a freshman, and Rachel, a junior who enjoys visiting her older sister on campus.

“We’ll hang out, go to the Family Weekend football game,” Caroline said. “[Rachel] is one of my best friends. She always likes staying with me. She always asks, ‘Can I bring a friend?’”

Rachel will begin her college search soon, a process that gave rise to uncertainty in Caroline. Despite her familiarity with the College, she wasn’t positive about her choice until she attended Admitted Students Day.

“I wasn’t really sure,” Caroline said. “When I applied to schools, I honestly had no idea where I wanted to go. I was clueless. I came here for Admitted Students Day, and I loved it. I’ve grown up loving it here, and it was so familiar that I just knew that this is where I wanted to go.”

Since the days of his initial admission to the College, Todd has noticed changes. The campus has expanded, with more academic buildings, dorms, fraternity housing, new athletic amenities and student facilities like the Sadler Center.

“The physical beauty of the campus has always been there, and it still is there,” Todd said. “I think that we have by far one of the most beautiful campuses in the U.S. There’s a lot of new activity on campus; that’s probably the biggest change. But campus itself hasn’t really changed too much. The [Sir Christopher] Wren Building’s still there, and the Sunken Gardens are just as pretty today as they were when I was in school.”

One thing that hasn’t changed, in Todd’s opinion, is the level of talent that the College cultivates in its undergraduates.

“I think we’ve always attracted outstanding students, but today, we attract the best students we’ve ever attracted,” Todd said. “[Students are] smart, they’re leaders, they’re involved in diverse campus activities, some are involved in sports. We’re fortunate to attract the best of the best — the best not just being what they do in the classroom, but also what they do outside the classroom.”

While on campus attending to his responsibilities as the rector, Todd often grabs breakfast with Caroline. For this reason, as well as their enthusiasm for the school, the Stottlemyers consider the College a home away from home.

“I really just like the community,” Caroline said. “Even, like, talking with some freshmen that I’ve met this year, they‘re like, ‘Everyone’s so welcoming’ which is definitely true. Everyone’s happy and smiling. It feels like home. Of course, there’s also the fact that I do get to see [my dad] a lot.”