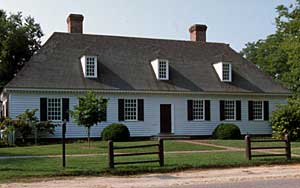 On quiet Friday nights, bored students might derisively label Williamsburg a ghost town. That moniker may not be far from the truth, if you believe in the possibility of ghosts.

“Williamsburg’s got a long, interesting history with many twists, turns, unique locations, and horrifying truths,” independent ghost tour guide Adam Stackhouse ’04 said in an email. “With a place that’s been around so long and through so many crazy things, stories are bound to emerge.”

Williamsburg has seen its fair share of disaster — from the physical destruction of the town to the personal calamity of its inhabitants. Colonel John Chiswell, a member of the House of Burgesses in the 1750s, created a scandal one night after drinking too much in a tavern out west.

“My ancestor, Chiswell, started calling [another patron] names, like, ‘a ruddy Scotch Presbyterian,’” Colonial Williamsburg Foundation Research Historian and Associate of the Omohundro Institute for Early American History and Culture Dr. Taylor Stoermer said. “Them’s clearly fighting words. They both happened to be wearing swords. There’s a lesson for you, swords and alcohol don’t mix.”

The incident prompted a political scandal and one of the first ever crime scene drawings, published in the Virginia Gazette. The controversial Chiswell case was set to be tried in Williamsburg.

“The night before his trial was to start, his wife found him dead,” Stoermer said. “The way the newspaper explained it the emotional strain was too great for him to bear. The family story is that he committed suicide. Exactly how he did it, no one really knows. Too graphic for 18th-century newspaper.”

His disgraced specter may still haunt the Chiswell-Bucktrout House in Williamsburg. While he does not believe in ghost stories, Stoermer appreciates the historical truths that they often reveal.

“It’s not just talking about Thomas Jefferson and James Madison and the distinction between religious freedom and toleration,” Stoermer said. “You can actually get into the real essence of these people’s lives.”