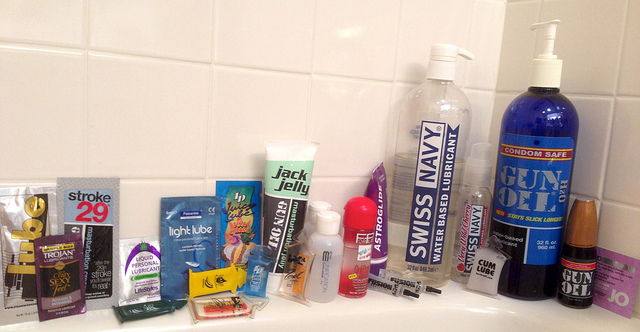 To be honest, I really only have one main thing to say about lube: It’s great and you should be using it.  If you’re not convinced, read on.

A lot of college students have entirely the wrong idea about lube. You might think it’s dated, or a little gross, or that only old people need it. I have to admit, I was a little hesitant to try it at first. That was mostly because an ex-flame’s mother once suggested to us that we try “spermicidal lubricant,” but cautioned us to be careful because of my sensitive skin. Seriously, that really happened to me, and I still get uncomfortable when I think about it. Once I got past that trauma, however, I realized that a little lube can be a great thing for both partners.

If you’ve never used it before, here is your crash-course in lubing up. In the vast majority of cases, use only water-based products. They are much more convenient to clean up, and are significantly easier to get out of your clothes and sheets than oil or silicon-based varieties. Even more importantly, water-based lubricants are safe to use with condoms, while oil-based varieties can weaken the latex, causing breakage. You may be tempted to try Vaseline, lotion, or other products that you have on hand, but you’re much safer going to the drug store and dropping a few dollars on a bottle of KY Jelly.

At first, it might seem awkward to incorporate lube into your routine, but it can serve to enhance the experience for both partners. For when you’re warming up, give Durex’s “Massage and Play” a try. It doubles as a body massage gel and personal lubricant, making both the build-up and the action that much more enjoyable. Several brands make warming varieties if you’re looking for a slightly different feel. These can also be incorporated from start to finish. A word of caution about warming lube, though: Nobody ever enjoys Fire & Ice. Seriously. Just don’t do it.

No matter your level of experience, you could do with a little lubrication in your life. If you’re just starting out, you can avoid some of the initial discomfort many people experience. If you’ve been at it for a while, you know that sometimes you need a little help, and there’s nothing wrong with that. Sometimes a little water-based assistance means you can go longer or more frequently without the usual wear-and-tear. To paraphrase a friend, you can avoid the situation where another round sounds great, but you think the friction might make you cry. Using lube is not admitting defeat; it’s simply a great way of getting your body on the same wavelength as your brain.

Whatever reservations you may have about trying lube, let them go. Go to the drug store and buy a tube. You probably won’t need it every time, but it never hurts to have the option. There isn’t really a wrong way to use it, so start out sparingly and experiment a little with your partner to see what works for you. No matter your style in the bedroom, lube is worth a try. I have yet to hear of a couple who was disappointed.

Cate M. is a Behind Closed Doors columnist who is seeking a sponsorship deal from KY Jelly.