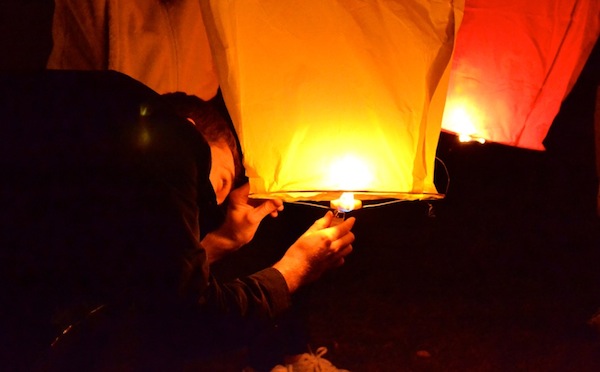 They were flying high, at least as high as the strings would let them, in an assortment of colors. As the sun set and throughout the night, they created a relaxed, peaceful feeling when looking out over the sky. Stepping down into the Sunken Garden provided a clearer view of the action: The Chinese Student Organization was hosting its annual Lantern Festival.

From 6 p.m. to 11 p.m. Wednesday night, for a small fee students could pick a lantern color and shape, write a wish on it, and send it off to the sky.

The Lantern Festival is a popular tradition in Chinese culture.

“It was really cool. I’ve seen this in movies, I’ve seen it in documentaries, and I’ve seen it in ‘Tangled,’ but I didn’t know that it was something that actually worked, which was cool,” Ryan Wilmington ’18 said.

Drawing the idea from the traditional lantern festivals that take place in the spring, the Chinese Student Organization chose to hold its in late fall because of the shorter daylight hours, allowing more time for students to send lanterns off to the stars.

“It’s a part of Chinese culture that is supposed to be very romantic and very relaxing. We do it on a Wednesday because generally on the weekends people are out, and on a Wednesday people can use it as a study break to just come out and chill for a little bit,” club treasurer Howe Wang ’17 said.

Typically, the lanterns are allowed to float off into the sky, taking the lantern holder’s wish along with them. However, as a result of the fire hazard the surrounding trees posed, students had to hold their lanterns attached to string. Disney and pop music was played in the background to maintain a light and fun atmosphere.

“I really like how when there’s a lot of people here and you see all the lights, it’s really pretty. It’s fantastic, and when it gets dark, everything glows and it’s really nice,” Wang said.

“I like the concept,” she said. “I wish more people did it so that it would be a whole sea of lanterns, but it was really pretty.”