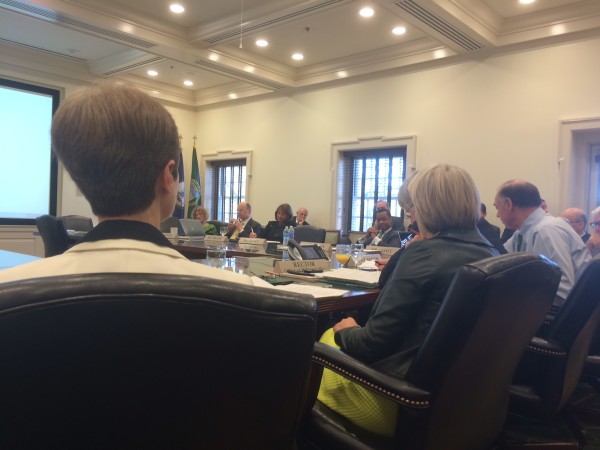 “Predictability is very important when planning a budget,” Rector Todd Stottlemyer ’85 said in a press release. “We have found that Virginia families and students appreciate the ability to plan well in advance knowing that their in-state tuition rate won’t change.”

“The feedback we get from parents is that they like the guarantee,” Jones said. “They’re able to say, ‘We know this is the price. Does a William and Mary education give us the value for that price?’ Since the price isn’t going to change once they make a decision … Ultimately, then, it’s just about whether the student wants to come here or go somewhere else.”

Jones said that in order to determine in-state tuition rates, the College first draws up a six-year plan, which is submitted to the State Council of Higher Education in Virginia every two years. This plan takes projected state funding, faculty salaries, student financial aid, operation costs for new buildings, and the possibility of increasing tuition rates for out-of-state students into consideration.

Jones noted that the William and Mary Promise ensures that in-state students will not experience mid-year tuition increases. He said that the size and quality of recent classes is proof that the plan is worth keeping.

“All the data showed, three years into it, we were still getting record numbers of applications to our undergraduate program and the quality of students is being maintained,” Jones said. “We said, ‘Okay, we haven’t done any harm.’”

Jones said that the College also seeks to counteract the rising “sticker price” of tuition by committing more funds to need-based financial aid.

“We didn’t want any unintended consequences … we’re maintaining the quality of the student body and applications, but students of need, students from diverse backgrounds, all of a sudden they can’t come because of this price increase,” Jones said. “Our investment in financial aid makes sure the access doesn’t get hurt.”

According to a press release from the College, it has the third lowest “net price” for in-state undergraduates among all public universities in Virginia, behind Norfolk State University and the University of Virginia-Wise.

Jones said that the William and Mary Promise comes with risk, as it locks down a large portion of tuition costs in a time when the school must contend with decreases in state funding and the volatility of tuition costs. However, he said that only a crisis — like the 2008 recession or unforeseen, dramatic state cuts — would lead to the cessation of the policy. Jones said that even in the event of an unforeseen financial issue, the College would never renege on any guarantees it had previously made to students.

“It’s important that any student from Virginia who is admitted to William & Mary be able to attend no matter what their financial situation is,” College President Taylor Reveley said in a press release. “And if you come from a family who can afford to pay full freight, you are still getting excellent value for one of the best undergraduate educations in the world.”