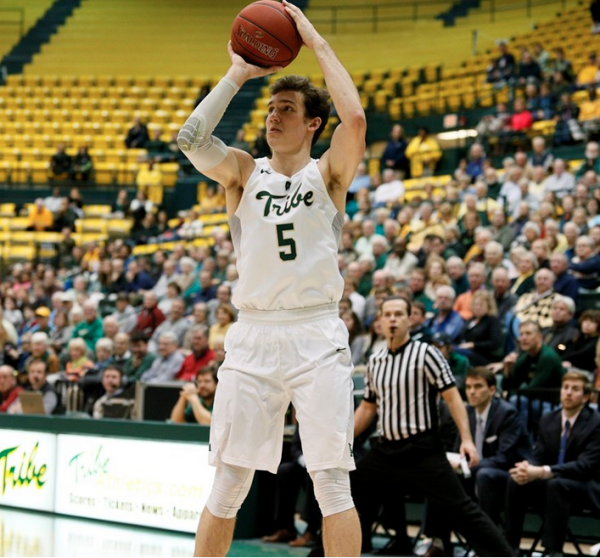 The Tribe continued its winning traditions Jan 7.,  marching into Philadelphia and defeating the Drexel Dragons 72-63 for the second consecutive Colonial Athletic Association win of the season.

Both teams started off sluggishly, committing turnovers early on. Junior guard Daniel Dixon and senior forward Terry Tarpey got William and Mary (10-4, 2-1 CAA) off the ground, combining for the team’s first seven points. After a television timeout, Drexel went on a quick 10-2 run, with four separate Dragons scoring in those four minutes. The College came roaring back from the 9-16 deficit, dominating for 8:38 of gametime via a 27-4 scoring onslaught. Tarpey and junior guard Omar Prewitt each scored five points in the run, and Dixon led the way with seven. Drexel’s Rashaad London calmed things down with four points, but his team entered the half down 44-27.

Tarpey burst out of the gate to begin the second half, scoring the Tribe’s first ten points and matching Drexel’s attempts to climb back into the contest. Despite a good offensive stretch, Drexel (2-12, 0-3 CAA) was forced to take its first timeout after Tarpey scored at the rim for the third time in the half. The break didn’t help matters for the Dragons, as a Dixon three-pointer pushed the College’s lead to 20 points.

Both sides traded buckets with sophomore guard Greg Manlinowski contributing five points in that run of play. Drexel’s Tavon Allen knocked down two three-pointers, and scored another two points to cut the William and Mary lead to 68-55. However, the home team still faced an uphill battle. With a thirteen-point lead and four minutes to kill, the Tribe made enough stops defensively to seal their tenth victory of the season with a final score of 72-63

Tarpey and Dixon combined for 40 points and nine rebounds for WIlliam and Mary, while sophomore guard David Cohn chipped in with nine points and six boards. Off the bench, Manilowski recorded eight points, four rebounds, and two assists in 17 minutes.

Though Drexel shot a better percentage from the field, the dragons’ awful 58 percent mark on free throws cost them five much-needed points as they shot 7 of 12. William and Mary outshot Drexel by 11 percent from beyond the arc for a nine point advantage, another key factor contributing to the nine-point win.

With the victory, the Tribe improves to 3-0 since 2013 against the Dragons in Philadelphia and narrows Drexel’s advantage in series to 20-13 all-time. The College has struggled as the home team since 2012, going 1-2 in Kaplan.